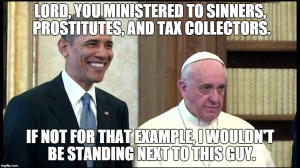 Doesn’t the Pope look just SO HAPPY? No.

While the media drools over everything that the Pope says, either with THE POPE’S A DIRTY COMMIE, or THE POPE IS A GREAT COMMIE!

Let’s look at some of what the Pope is actually doing, because I’m tired of this crap.

Obama: invites every freak on the planet to meet with the Pope.

Vatican responds with a complaint about who was invited.

THEN the Pope shows up late to meet with Obama, stopping along the way to meet with every other group of people.

Media continues with, “Oh look! The pope’s a good liberal!”

…Oh look, he wouldn’t meet with any of the Democrats who claim to be Catholic but really share none of the ideals of the Catholic church, and ate with the homeless instead. But I thought he was supposed to hang out with whores and tax collectors. Heh heh heh.

Speech before congress: Pope calls for respecting life AT ALL STAGES OF LIFE.

Left Media takeaway: YEEEAAAAHHHH! The Church is against the Death Penalty!!!!

Me: Um, the Popes have been that way for the last three popes.

Speech before congress: Pope discusses the sanctity of the family, that “fundamental relationships are being called into question, as is the very basis of marriage and the family.”

Media: Wait? Did he mean gays? And the Trans? THIS DIDN’T HAPPEN! RUN AWAY! RUN AWAY!

Democrats: Stay in their seats the whole time while Republicans give a standing ovation.

The Pope then visits the Little Sisters of the Poor, who are fighting ObamaCare’s contraception mandate, and have been for well over a year now.

Hell, even Ann Coulter went straight back into traditional American, anti-Catholic roots, and I generally find her amusing and her books informative.

You know what? I get it. I understand that people want to look at everything the Pope says in a perfectly political context.  The headlines tomorrow will depend on the points of view involved. Either people will want the Pope to be the villain or the hero.

The less said about “The Pope hates capitalism” the better. That’s been beaten to death over here, and I’m a little sick of that, too. There’s a difference between “I want to start a company in my garage and become Apple” and “MONEY IS MY GOD!!!!!!!”  If you do not understand that difference, you have a problem, and I don’t think that any of us here can help you out.

As Matt noted, where are the media drooling over the anti-Catholic protesters?  Where are the topless feminists who charged the Vatican?  Where are the hordes who protested Benedict? Are they just not being covered this time out, because the media sees what they expect to see?

And no one — NOT ONE SINGLE PERSON — can point to something that Pope Francis has changed in Catholic doctrine. If someone will please read Laudato Si, the “climate change” encyclical, they might notice that it has more to do with uniting a bunch of little Catholic statements and tying them together into one document — including industry as part of human ecology, there being only two sexes, that baby humans are as important as saving the whales, you know, BASIC CATHOLIC DOCTRINAL STUFF.

Everyone wants the sky to be falling, and I’m a little tired of it.  They want the world to burn — or at least Pope Francis.

Just don’t expect me to believe you when you try convincing people that he should.

Declan Finn is the author of Honor at Stake, an urban fantasy novel, nominated for Best Horror in the first annual Dragon Awards. He has also written The Pius Trilogy, an attempt to take Dan Brown to the woodshed in his own medium -- soon to be republished by Silver Empire Press. Finn has also written "Codename: Winterborn," an SF espionage thriller, and it's follow-up, "Codename: Winterborn." And "It was Only on Stun!" and "Set To Kill" are murder mysteries at a science fiction convention.
View all posts by Declan Finn →
This entry was posted in Commentary, News, The Church and tagged Mainstream Media, Pope, Pope Francis, Strawpope Frank. Bookmark the permalink.