Did we just skip December? *checks calendar* Yeah, see? It’s still November! What gives? Why are we skipping ahead?

Answer: we’re not. Longer answer: it actually is the first day of the new year . . . the Roman Catholic new year, anyway.

Hmm. I think I just made a bunch of you a little more confused. Let me back up a bit.

In today’s multicultural society, we’re used to the idea that people from other parts of the world might have a different way of counting the start of the year. In the United States, we often take time to acknowledge at least the Chinese New Year, and we know that Jews and Muslims have their own even if we might skip over the celebrations. That’s probably because the new years that make it into mainstream culture are the ones with fireworks.

Well, Catholics have a New Year’s Day of their own. Eastern-rite Catholics (Byzantine, Melkite, etc.) already had theirs. Roman Catholics have theirs today, November 28th, on the first day of Advent.

Confusing? It’s a lot simpler than it used to be. If you were a resident of medieval England, you could potentially mark several different new years: liturgical (Advent), calendrical (January 1st), agricultural and taxational (March 25th), regnal (anniversary of the king being crowned), and governmental (September 29th). It gets even more complicated if you factor in the rest of Europe, because very few people agreed on (or really cared about) synchronized dates across international borders other than the Catholic Church. (For more about this, and particularly how it relates to The Lord of the Rings, I’ve got an article over at Novel Ninja on the topic.) The Church, of course, cared about it because that whole “organized religion” thing didn’t really work well without organization.

As a result, most Christians have liturgical calendars very similar to the Catholic kind, and that’s why colors in the church and on a priest or minister’s robes will change throughout the year. With Roman Catholics, the most common color is green, for Ordinary Time: the parts of the year that focus on Christ’s three-year ministry on Earth. 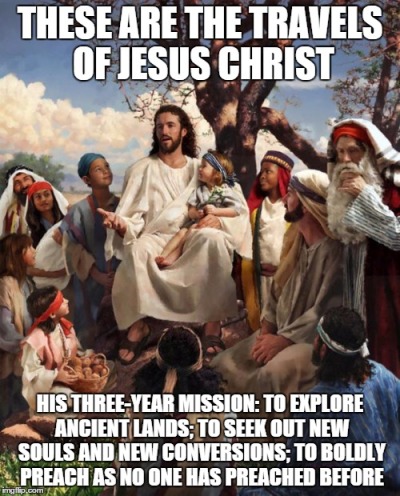 There are five other liturgical seasons: Advent, Christmas, Lent, the Triduum, and Easter. The Triduum is the shortest, lasting three days; Easter is the longest, other than Ordinary Time, and lasts for fifty.

Here’s a calendar which should explain the whole thing: 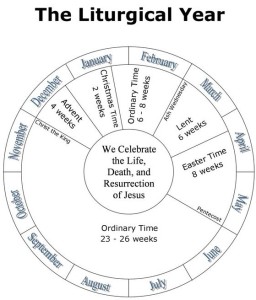 The whole thing starts off with the first Sunday in Advent, which takes place four Sundays before Christmas Day. That means, in case you’re wondering, that the Roman Catholic new year starts on the Sunday before the first Thursday in December, or whatever Sunday falls on or between November 27th and December 3rd.

Advent and Lent are related. They’re most often described as times of penance and fasting, but that’s really not the best description. They’re seasons of preparation, as we get closer to the two most important dates on the liturgical calendar: Christmas and Easter. Both Advent and Lent use purple as the liturgical color, though each of them have one Sunday (Gaudete Sunday is the third Sunday of Advent, and Laetare Sunday is the fourth in Lent) where the color is actually rose. (Well, it’s pink, but I have a strong feeling that if I say that too loudly Fr. Mastroeni is going to reach through the computer and Gibbs-slap me.) This is why the traditional four-candle advent wreath has three purple candles and one pi– I mean, rose.

Advent isn’t a mandatory fasting time like Lent is, at least in the Roman Rite. (Every year, my eastern-rite friends rib me about being lazy.) That doesn’t mean it’s supposed to be ignored, though. Advent is a time of preparation and anticipation, and it should be approached with both joy and responsibility. Just as we have a lot to do to get ready for family at Christmas, so to do we Catholics — and all Christians — have a lot to do before celebrating Christmas in its entirety.

Yes, this is the time of year when you’ll see lots of people repeating platitudes about the Reason for the Season, etc. That’s not the full story. I find those slogans to still reduce the whole point of the holiday almost as much as the people who want to remove all religion from it. Yes, Christ is at the center of it; it’s why it’s called Christmas. But it’s more than just a manger scene and singing carols that use Jesus’ name. It’s about becoming receptive to Him.

Think of it this way. If you’ve got a guest coming, wouldn’t you tidy up your home first?

The next season on the calendar, as you can see, is Christmas, where the liturgical color is white. And Christmas is, of course, more than just one day, one twenty-four-hour period.

Christmas actually used to be a lot longer, and would end with February 2nd, or the Feast of the Presentation (yes, that’s Groundhog Day in the United States); most Protestants who observe that do so eight days after Christmas, while Catholics wait forty days.

You might hear some Catholics or Protestants encouraging people to leave up their decorations until what used to be colloquially known as Twelfth Night (yes, like the Shakespeare play), or January 6th. To add to the confusion, some people observe it on January 5th, counting Christmas Eve as the first night of Christmas, which means that Twelfth Night can sometimes come before the twelfth day, depending on who’s counting.

That starts-the-night-before thing isn’t all that weird, at least for Catholics and many other Christians. We hold to the Jewish idea that, liturgically speaking, the day actually begins at sundown rather than midnight. That’s why we Catholics can have a vigil Mass on Saturday as if it were Sunday. That also means that Christmas really does start on the night of Christmas Eve.

And, if you’re lucky enough to attend a Catholic church during the Christmas Vigil that’s putting in extra effort, you can get a candlelit Mass:

The above video takes place at the National Shrine of the Immaculate Conception in Washington, DC. The whole Mass isn’t lit only by candles, but I wish it were.

Christmas is also one of only two holy days on the Roman calendar with what’s known as an octave; that’s nothing to do with music, but rather that Christmas and the next seven days are first-class feast days. That means you’re supposed to party during those days, even on a Friday.

After that, we enter Ordinary Time, though this one has a bit of a ramping-up period as we approach Lent.

“Lent” is just an old word for “spring.” It’s a time of labor in an agricultural society, which makes it very easy to be linked with privation and personal sacrifice. There is a very short window after the winter thaws to get crops planted, and in a medieval-level society stores tend to be running low at this point anyway. Since the Church required people to fast during this time, including from all meat products and even eggs, that usually meant a bit of a party before Ash Wednesday, the first day in Lent, to use up the remaining stores that would normally go bad. So yes, Mardi Gras used to be a practical celebration, though a celebration nonetheless.

Lent is longer than Advent, and considered more serious all the way back into antiquity. Christ commanded that one should fast without appearing miserable, but no one wants to be thought of as avoiding their obligations even today. (Just look at how many people want to be acknowledged for their support of this week’s cause celeb, which rarely amounts to much more than Facebook activism.) These days it’s much less severe, but remember this: in 1915, a hundred years ago, indoor plumbing was a novelty. We live in a society that’s so soft, with riches so readily available, we don’t have to go very far to to encounter hardship. That’s why the Church has shifted to emphasizing the spiritual nature of penance today.

After Lent we have the Triduum and Easter. The Triduum’s colors are red, signifying blood, and so are used during Holy Thursday, Good Friday, and Holy Saturday. The red is also used on other special occasions, such as Palm Sunday, the feasts of the martyrdom of the Apostles (except for St. John the Evangelist, the only one who died of natural causes), and Pentecost. While Lent is over, Good Friday is a mandatory fasting day, so Catholics traditionally extend their Lenten penances until their celebration of Easter Mass.

As you now know, the day begins at sundown; so Easter begins as darkness falls on Holy Saturday, and many pack into churches for the Easter Vigil Mass. I remember my first Easter Vigil, and the entire church lit only by candles held by every person in the congregation. It’s my favorite Mass of the entire liturgical year, even over the Christmas Vigil, and I try to make it to the National Shrine each Easter.

This is a recording of the entire 2013 Easter Vigil Mass at the Shrine, in case you want to see what the hubbub is about. (Note: it actually starts after a minute and a half, so skip ahead or be patient.)

Easter’s color, like Christmas, is white, symbolizing purity and light. The Easter Vigil begins with a celebration of that same light; as Christ conquered the darkness, and ask the faith spread like a flame, so too does the Easter flame spread through the church. It’s a beautiful sight, especially at the Shrine.

Like Christmas, Easter has an octave. After all that fasting, you’re expected to relax and enjoy yourself.

The full season of Easter ends with Pentecost, the celebration of the actual birth of the Church. That’s when Christ appeared to the Apostles and gave them the courage and grace they needed to go out and preach to all nations.

After Pentecost, we once again enter Ordinary Time. We spend approximately six months with green, symbolizing growth and life.

And that is the Roman Catholic liturgical calendar. It symbolically charts a path for Catholics from preparing for Christ’s coming, to celebrating His birth, to preparing for His death, and then living according to His teachings. It’s not random, or assembled according to when there was an open spot.

It’s also interesting, from an historical perspective, that the Church never tried to get the kings of Europe to schedule everything according to the liturgical calendar. It would have been fairly easy to reorganize the old Roman calendar so that it started with December rather than January. The Church was much more involved in society than many are comfortable with today, but it’s often informative to look at what she did not do, and then ask why.

But for now, it suffices to repeat what I wrote at the beginning of this post. To all of the Catholic Geeks audience, whether you worship in our church or not: Happy New Year!

Matthew Bowman is a traditionally-minded Catholic convert and freelance science fiction and fantasy editor, which means that he's in high demand in a small population. Fortunately, he loves talking about stories. And Catholicism. And history. And philosophy. And lots of other stuff.
View all posts by Matthew Bowman →
This entry was posted in The Church and tagged Advent, Christmas, Easter, Lent, Liturgy, New Year, Ordinary Time, Triduum. Bookmark the permalink.