In Defense of Black Friday

In the United States, there’s a love-hate relationship with Black Friday. We love to hate it, and yet we line up in the dark and cold to spend money on more stuff. 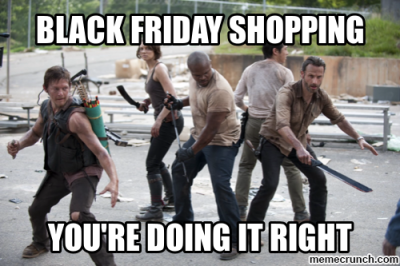 Well, except for me, and a whole bunch of other people. I think I’ve occasionally grabbed a few things online, but even in my financially worst years I never thought it was worth it to fight the crowds. Why put myself through that to get things, when the things I actually wanted (or even needed) didn’t tend to be the stuff discounted on Black Friday?

But that doesn’t mean I think Black Friday is a horrible day, and we shouldn’t go shopping on the day after Thanksgiving. I’ll even go a step further. I’ll tell you why Black Friday, for all its horrible flaws, is fundamentally a good thing.

The name “Black Friday” started as a corporate term, not a marketing gimmick. It referred to how a retail company (assuming a fiscal year that started on January 1st) would not be “in the black” until the Christmas shopping season started. That traditionally started on the Friday after Thanksgiving . . . though as we all know, it’s been starting earlier and earlier each year. (Which isn’t a bad thing either.)

That’s where the good stuff starts. Yes, I know, “profits” are supposed to be a bad thing these days, even though the people who spout that particular ideology benefit from the profit motive themselves. The more a company makes, the more it can invest in jobs, services, new and better goods, and open more locations to reach more customers. A higher profit margin also lets a company offer its goods for less, remaining competitive with others.

That competition is where the Black Friday sales tradition started. If a company could offer more deals than a competitor on a day when many, if not most, Americans are already taking the day off, then they could be in the black faster.

Okay, so that’s what’s good for the corporations. What about the consumers? Why should they have to leave the house during the most family-focused holiday of the year and go commit commerce in the hopes of saving a few bucks? 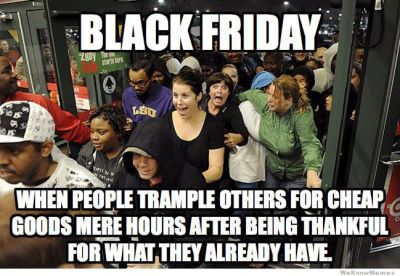 The answer is the same as the previous one. This is the day when many, if not most, Americans already have the day off. There are only a few weekends before Christmas, and — especially for low-income working families — there isn’t a whole lot of time. Add in the deals, and for many families this is their best chance to provide the gifts they want to give.

How can I stand against that?

There are so very many things wrong with Black Friday, yes. I hate hearing about fights between customers, or how some retailers will advertise a great deal even though they don’t have nearly enough stock to keep up with demand, just to get people in the store to buy something.

But I keep thinking about the people who don’t have much to spend on Christmas gifts, and this is the day they count on to get something worth even a tiny fraction of what their families, the center of their lives, actually deserve.

The same thing goes for the employees who work on Black Friday, some of whom have to get to work on Thanksgiving itself to prepare for the rush. Many of them need the job, particularly since most stores will pay overtime for that day. Yes, this can interfere with Thanksgiving observances, but many families plan around that. The holiday of Thanksgiving happens on a Thursday, but there’s no reason why an individual family’s observance has to take place on that exact day.

My family is no stranger to this. Ever since September 11th, 2001, my family has had to move its observance of Thanksgiving or Christmas, or both, almost every year. My brother is a cop on the night shift, and has been for nearly two decades. He frequently works holidays, providing a very necessary service to the city of Washington, DC. Our father is retired FBI (as well as a few other alphabet agencies), and in the early Aughts he was working overtime on holidays as well.

This year, we had Thanksgiving the day before, because that worked out best for my brother. He didn’t have to rush home to get a few hours’ sleep before going to work. It made things cramped for us, in terms of prep time, but we managed it. I think it was worth it.

If you don’t like Black Friday, you don’t have to shop on Black Friday. I don’t. But don’t tell others they can’t. They might be counting on that day even more than the retailer offering the sales.

I’ll just ask you to keep one thing in mind, whether you’re shopping or not. Matthew Bowman is a traditionally-minded Catholic convert and freelance science fiction and fantasy editor, which means that he's in high demand in a small population. Fortunately, he loves talking about stories. And Catholicism. And history. And philosophy. And lots of other stuff.
View all posts by Matthew Bowman →
This entry was posted in Analysis and tagged Black Friday, Christmas, Economics, Family. Bookmark the permalink.