Quick Review: All You Need is Kill (Manga version)

Hey, I’m back! Today, I’m giving a quick review of a manga I bought Tuesday morning and read twice before the end of the week. It’s called All You Need is Kill, and it sits at the intersection of Groundhog Day and Halo, with maybe a touch of Pacific Rim. Short take: it was a great, tight story with awesome art and a strong ending.

What It’s About
All You Need is Kill is a 550-page manga (which is short, by manga standards) about a futuristic invasion by eerie inhuman aliens. After the main character, Kiriya Keiji, dies on Page 1, he wakes back up the day before the battle, in his bunk. And that’s where the story kicks off, as he tries to figure out why he’s stuck in a time loop, and how he’s going to get out. If “protagonist fights aliens while stuck in a time loop” sounds familiar, you’re right! This manga was based on a Japanese light novel of the same title, and then Tom Cruise starred in a movie called Edge of Tomorrow which was more or less based on it. (I haven’t read the light novel or seen the movie, yet.)

After Keiji loops a few times, he dedicates himself wholesale to his mission (with all the savvy of a gamer), and that’s when the core of the book starts. It mixes action horror and character studies, as Keiji slowly loses his human edge. He constantly improves himself, all the while fighting in the shadow of Rita Vrataski, an ace American battlesuit soldier who came with her personal squad to supervise the defense of Japan (which is home to the battlesuit manufactories of the world). Rita is a petite but fierce fighter who’s developed a fearsome reputation as the only soldier able to effectively fight the alien Mimics.

Why It’s Good
The story was adapted into a manga by the author/artist of Death Note, and it shows through in not only the dark tone of the art, but also the psychological element of the story. As we see Rita and Keiji in action, we learn what’s going on inside their heads, as they fight an impossible war against massive odds. Most importantly, the manga takes a massive interest in exploring the effects that constantly looping back in time with a fixed purpose has on the characters. How do you carry out relationships with the people on your base when you’re just repeating the same day-and-a-half over and over again?

The Mimics themselves are a fantastic menace, depicted as creatures unlike anything you’d find on earth. They’re downright scary in the way that they can carelessly annihilate a normal human, and eerie in their unknown motives. They’re presented as an enemy that cannot be dialogued with, which sets the stakes incredibly high.

Also, check out that art. I’m a big fan of how clean and evocative manga art tends to be: it’s full of detail and beautiful contrast, which is particularly important when it’s done exclusively in black, white, and halftone. (Seriously; the work done in manga is amazing.) This manga? It’s easily some of the best work I’ve ever seen, and it is gorgeous to read. Visually stunning, and it gives the story wonderful grounding. 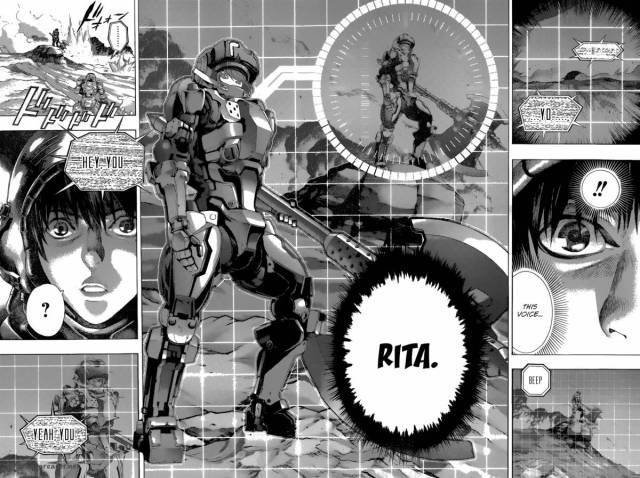 Finally, there’s the emotional and character-grounded element. Do you get the feeling that these are real people with wants and needs and feelings? Better believe you do. There’s a moment that I can’t talk about without spoiling the plot, but we’ll just say that in one panel, it perfectly captures the relief of finally finding solace in another human soul. It doesn’t even need words. Why? Because you’ve come to know and care about these people, you understand what they need, and it’s a major whammy when they finally catch sight of it.

The story uses that to drive home an ending that’s emotionally powerful, resonant, and quite honest with itself. It doesn’t feel cheap, unearned, or out-of-place. And as you might expect from a story with time-looping, it is a little confusing on first read, but it definitely fits as you think about it. As another nice touch, the story likes to drop little bits of foreshadowing here and there, which is another reason to reread it: all those little details that you notice on a second read. “Oh! They were hinting at X the whole time!”

Final Verdict
I really enjoyed All You Need is Kill; while it’s not my favorite manga (probably a tossup between Vinland Saga and Monster), it’s a great, short read that turns out to be a really tight sci-fi story.

This entry was posted in Fiction, Reviews, Science Fiction. Bookmark the permalink.

2 Responses to Quick Review: All You Need is Kill (Manga version)