I almost wish that The War Revealed came out this month.  That way, I could have voted for it for the Dragon Awards this year. I’m going to have to settle for The Lost War (reviewed yesterday).

Newman and Goldenrod survived landing in a monster-infested wilderness. Their group of historical reenactors no longer fears starvation. But can they control the magic powers people are developing? Discover how they were transported there? And stay safe from the orcs and dragons? 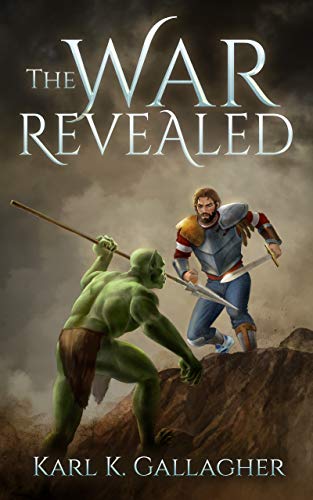 As noted in yesterday’s review, this series is amazing.

In the first book, we saw the emergence of magic just beginning to settle in among the folks of the SCA troop transported to a fantasy world where magic is common … and so are orcs. This book goes far deeper into the mechanics of magic. I’m trying to recall when the last time I saw magic being executed this practically. In the previous novel, a lot of time was spent on logistics and how things work. This novel centered around how magic worked. There’s Chekov’s gun, and then there’s Checkov’s SAW. There were even some uses of potential energy that read a little bit like old-school philosophy (IE: Ancient Philosophy). And some of it boils down to “Magic is weird.”

But yeah, there’s a lot of how things get done, only with magic. Call it “hard fantasy” if you must be picky, but it’s interesting and readable for well over 30% of the book.

Then there were the elves. The mother. Flipping. Elves. Who are nasty, brutish and …. tall. The following exchange from the book sums it up rather nicely.

“It’s an Elf.”
“Don’t call it that. We don’t know anything about it. If you call it ‘elf’ just on its looks, you’re making assumptions about its culture, morals, everything. That could bite us.”
“I’m not going by his looks.”
“What then?”
“The arrogance.”

The book 1, the reader was made aware that our heroes were brought over to help with the orc problem — the humans are the exterminators. Here, our heroes are told the “why,” and then things become fun. Once again, the moral of the story is “Don’t screw with the humans.”

About a third of the book is focused on magic and how it works. Twenty percent is on the elves. And the rest of the novel focuses on and gears up to The Big Battle.

Also .. yeah, I’m going to make one or two more comparisons to John Ringo. Why? Because of lines like “The reply that sprang to mind was It’s my job to be an @$$hole. But this wasn’t the army, he wasn’t a sergeant.” Then there’s an entire scene where someone is counting coup, only with orcs… because infantry, apparently. Yes, I still enjoy how easily Karl does character. Ignoring that some of the names are a tad on the nose (“Autocrat Sharpquill” is my favorite subtlety hammer), when Karl does character, he can do it in a few lines. I especially like the head of the camp, “King Ironhelm.” (“I played Othello and Richard the Third in front of a thousand people! I can keep a f***ing poker face.”)

And I do enjoy the lines. Karl even gets in good coinage. Like “I’m a Metatheist. I don’t believe in God, but I believe I should.”  I’m sorry, I just like the line.

And screaming “Cannae!” to order an encircling maneuver. That was fun.

I have one problem with The War Revealed …. there might not be a third book. So buy book one and two, read them, review them, and make sure I get a book 3, damn it.

And if you found this review useful, feel free to buy me a coffee.