Welcome to When the Gods Fell, the latest by the Dragon Award finalist Richard Paolinelli (Escaping Infinity)

Mars Is Hiding A Secret

When the first small group of humans arrive on Mars, they expect to retrieve some probes and learn more about Earth’s neighbor. Instead, they find Oracle Veritas, of House Delphi, who has waited 65 million years to brief these children of Olympus about their own origins, their very essence … and the danger that threatens them.

Seas and lakes, deserts and icecaps, forests and mountains once covered this planet then called Olympus. Veritas tells them that it was home to a race of immortals—Zeus, Odin, Yahweh, Lucifer, and others—who guided the fates of other worlds and fought among themselves for supremacy.

Zeus, Odin, Yahweh, and Lucifer, supported by characters from other realms, had battled for control. As civil war loomed, the most powerful of all the gods, Zeus, foresaw chaos and destruction. Left with a single, terrible solution to save all the worlds, Zeus turned to the only person he could trust to carry out his last order … and change all existence forever. 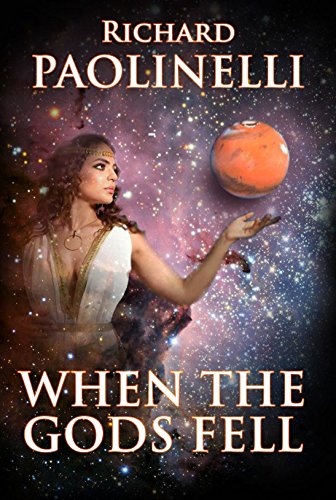 This was hands-down awesome. This is one part 2001: A Space Odyssey, one part Dan Simmons, and one part Babylon 5, with a hint of Mass Effect.

The short version? The concepts are brilliant The execution is spot on. There is about 10-15% of the book that needed a little bit of a trim, but aside from that? Wonderful.

This one is very much a novel. I don’t mean to be masty about the description. But this is as much of a novel as The Martian. Only without as much smart ass. Okay, there’s still plenty of smart ass — with the Mars station Von Braun, and rovers named Aldren and The Glenn — but this one is a bit more serious than The Martian. The execution of the science bit felt an a lot like the Martian — sensible, straightforward, and sciencey. (I especially like how Russia, in 2040, is still trying to cover their inferiority complex with bravado.)

As the flap copy mentions, the martian crew is wandering around the planet, minding their own business …. until they stumble upon a woman just standing in the middle of the martian landscape. She’s so happy that the humans seeded on Earth finally made it to Mars. Of course she managed to survive that long — she had become a being of pure energy (damn Vorlons. They get everywhere). And it’s a story 65 million years in the making (yes, I stole the Jurassic Park ad campaign).

The following story is an epic tale of … well, we’re going to take ALL the mythology, and make the gods aliens with style. There were so many mythological references in this one that I’m certain that I missed some. As this is mythology, there are enough betrayals and back stabbing to make the cast of Game of Thrones look like amateurs.

We have Caste Zion, led by Lord Yahweh, where everyone in the City of Eden is part of the national guard, which was helpful when Lucifer’s House Satania challenged Chronos Saturnius’ Caste Olympia a hundred years before hand, and Lord Marduk and Lord Tiamat of Houses Canaan and Dagon are plotting a followup coup….

Okay, this book is a little chocked FULL of smartass, if just requires a degree in classical studies (or a read-through of Bullfinch’s Mythology) to really get the jokes.

Now, in a book that mixes mythology and scifi — especially when one turned mythology into Scifi — you’d normally expect a ton of handwavium. Not really. I especially enjoyed describing Hades’ House Orcus as underground, on the banks of a fire river Styx …. but that Styx had carved out tubes and caves from pole to pole, and the way the water is described as being laced with enough methane so that the water was always on fire. It was just such a nice touch. It’s less scifi and more … fi.

And the ending …. well, all I can say is that you should pay VERY close attention to the numbers they throw about.

There is only one problem with this book.

And no, I’m not kvetching about “Yahweh is a Vorlon.” Even in the book, the Oracle telling the story said that yes, there was a Deity to whom these “gods” prayed. And I saw no mention of one of the kids becoming a carpenter. If you’re that concerned, unbunch your panties and just relax. This is not Dan Brown. Paolinelli is not poking at your faith with malice aforethought.

The real problem: As the book nears the end, it’s fairly obvious how this runaway freight train is going to end. In fact, we kinda know how the book is going to end from the beginning — but the journey to how it gets there is so interesting and so readable, you don’t care how it ends, you want to see how they got there. But after a certain point, runaway train is not only running off the rails, but is on fire. What comes next?

What comes next … is a heck of an epilogue that sets up for an apocalyptic battle that I’m sure will be very interesting….

But damnit man, why did you have to end it THERE?

Anyway, at least pick up When the Gods Fell .