Posted on January 6, 2020 by Declan Finn
Everyone knows the phrase “down the rabbit hole.” It’s an Alice in Wonderland reference, where the main character is in their normal, everyday life one moment, then in someplace utterly insane the next. Reality is utterly, totally, and completely different.

No. We needed an inter-dimensional portal that opens up to an invading army, sucking our hero into a realm that makes Wonderland look positively friendly and harmless.

Ilya, as he has secretly dreamed, is called upon to save the mad scientist’s beautiful daughter. With his squirrel gun, his grandfather’s sword, and his father’s crucifix, Ilya races to save the girl, and, incidentally, the world.

So it is, Ilya Muromets is a big, ugly, motherless boy who does not look like anyone else in his Oregon town. His father is often absent on mysterious Church missionary work that involves silver bullets, sacred lances, and black helicopters. One night, Professor Dreadful sends a warning to Ilya that his Many Worlds theory correct, but that his experiments have opened a door that should have remained closed, and his beautiful daughter, Penny, is in trouble.

The 2016 Dragon Award-winner for Best Science Fiction Novel, Somewhither is the first part of A Tale of the Unwithering Realm, a new science-fantasy series from science-fiction master John C. Wright. It is an adventure, it is a romance, and it is a coming-of-age story of a young man who is not a man, in a world that is only one among many. It is a tale of a greater and darker evil with longer reach than anything he could imagine, of pain beyond measure, and of the faith required to surmount all three. It is a story of inexorable destiny written in the stars and the stubborn courage that is required to defy it. 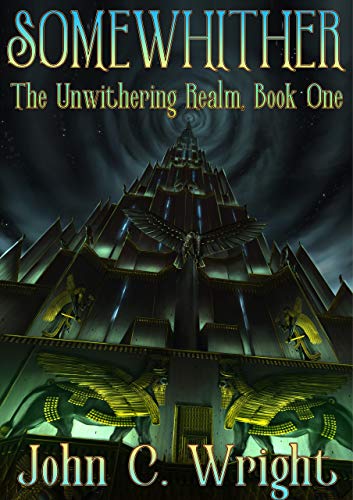 I loved this book. It was so delightfully insane, and so marvelously put together. I enjoyed it from the first page. Especially as our hero narrates that this was all for a girl named Penny Dreadful.

…. Yes. He went there. It doesn’t even stop there. If you folks think my writing is proof that I’m a smartass, you have got to read Somewhither. And this is just page one. Which includes the line “If you blame the damsel in distress, you are not the hero.”

The opening chapters may be a little slow to people who are not nerds. But you’re reading a book that’s one part scifi and one part fantasy. If you are not nerdy enough to enjoy Wright’s conversation about the how’s and why’s (and why nots) of branching timelines and alternate universes, why are you even reading this review?

But this is John C. Wright. He can probably describe paint drying in an entertaining fashion. Especially when he describes one incident with the supercollider as “let’s just say over a dozen scientists, staff members, and visitors were electrocuted, microwaved, and Hiroshima’d.”

I told you he could make anything entertaining. There’s even an entire conversation between Ilya and his father … during which you realize that things aren’t all that normal with this family (“Now Ilya, you’ve known that since you were twelve, when we taught you quantum mechanics.” Huh?). The punchline of this conversation ends with one of the most awesome reveals that I’ve seen in a while, and more or less backhands Stephen Pinker into next Tuesday, casually and easily, in one paragraph.

And the lovely little dissertations along the way are charming, and so un-PC, it’s delightful. There’s a conversation on lovely damsels. Or getting two halves of the brain arguing with each other lest they gang up on the hero to stop him from heroics. (The note I made on points like this is “Remember when Peter David was funny? Pepperidge farm remembers.”)

After Ilya falls into another world, and the plot gets off to a running start, one of the running gags throughout the novel involves language. Let’s just say that I think that if John C. Wright wrote Lord of the Rings, he would have sentence diagrammed elvish.

Once we get to meet the villains, they are delightfully evil pricks. In a world where astrology is an accurate science, and fate is everything, even some of the men running the evil empire are trapped. It strikes me very much like the Persian empire — “freedom” wasn’t even a word in the language. It’s not in this language, either. Neither is “right and wrong.” Funny that. They are so unambiguously evil, even the narrator points out

“On principle, I was not helping any group that called itself The Darkest Tower against places called the Great Golden City and Land of Light. That was a no-brainer. I mean, get serious. Suppose you were from another world and came to ours circa 1940 and you saw an SS officer in his black uniform with the silver skulls on his collar, and he said he wanted to exterminate some folks called The Chosen People from some place called The Holy Land, who would you think the bad guy was?”

Despite how obviously evil the adversaries are, they are not shallow evil. There is a bit reminiscent of Sam and Frodo being Shanghaied by orcs — Ilya is given a tour of The Tower by a creature that even Richard Sharpe would have identified as a Sergeant just by his banter. In it, we get a perfect picture of a Screwtape bureaucracy where Ilya concludes that the empire “is all full of bureaucrats and lawyers? This place is hell.”

Also, there is a lot of casual bits of humor scattered throughout. Such as the misattributions (“There is an old saying: if you want peace, prepare for war. I think it is in the Bible or something.”). And the little shots scattered throughout this novel are so much fun to behold. There’s the “Professor Dreadful” referred to in the blurb, who is a “Harvard trained symbologist” (to which Ilya’s father replies, “Amazing what they give degrees in these days.”) And the Templars are the good guys. (Dan Brown felt that one,) The bad guys of the piece are from The Dark Tower. And all of the evil sorcerers carry golden compasses (snicker). Some of the warnings of prophecy are right out of Lovecraft. When Ilya hears that someone is a ringbearer, he says, “You mean like at a wedding? Or do you mean like Sam Gamgee carrying Albrecht’s ring when it got too heavy for Tom Covenant?”

Even the casual comments about other timelines are entertaining (“Dude, my planet is run by Prussians …. You need paperwork to get permission to go to the outhouse.”)

Then there’s the bit that compared Fantasy Island to The Tempest. I feel like Wright has a lot of stuff in his head and it’s all stacked on top of each other.

And I swear the entire building of the final team is a reference to the X-Men, only interesting and without the angst. (We have an unkillable killing Machine. A wind manipulator called a “Cloud Walker”. A ninja. A Norse Shadow meets Moon Knight. The monster that chased Bugs Bunny. Captain Nemo. And at least one reference to Lady Hawk.) Though I’m relatively certain that Wright was going for a D&D campaign given how often he comments on character classes.

If I were to sum up this book in one phrase, it would be “Anime Narnia.” Thus, it would have a ton more action, epic fantasy, and make most of the golden era pulps look slow. Yes, there is a slow part here, but that’s mostly a horror element.

Of course, this book ends on a cliffhanger.

Thankfully, the next book is already out.  So get Somewhither today, and get the sequel immediately after it.