Posted on January 6, 2020 by Declan Finn
This one came out, and I have to tell you, it’s about flipping time. I read this book months ago. I probably should have written up the review immediately, but I was more interested in finishing the bloody books that came in around them.So, anyway, this is JD Cowan’s book — Gemini Man.

But Matthew gets more than he bargained for when he accepts a different position with the company. A job that is highly paid – and highly bizarre. He is plunged into the terrible machinations of his new boss, Mrs. Stohl, and a sullen teenaged boy named Jason is along for the ride. The fact that Jason is practically his twin only makes it all creepier.

Dragged through a mirror into an alien dimension, Matthew is in way over his head. He should have known the job was too good to be true. To escape, Matthew and Jason must brave the wilds of this new universe and learn to control their new powers.

And hardest of all, Matthew must learn to be a hero.

Will they escape Mrs. Stohl’s terrible plans for them? Can they make it home to their world, or will they be trapped in the mirror dimension forever? 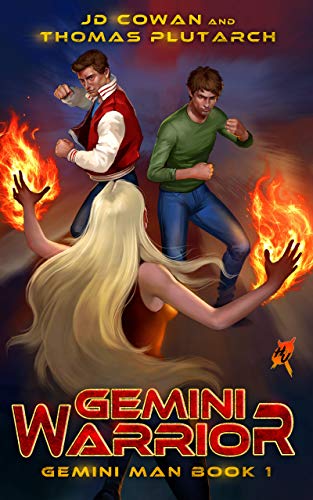 This was was different in many respects from the previous Silver Empire superhero universe novels. The other books were largely character based. This is both character and world based. Which makes for an interesting shift in tone and execution.

Even the tone is markedly different at times from the other novels. There are a few sections in the opening where you can imagine it being from a black and white movie, where Edward G Robinson or Jimmy Cagney is spitting out dialogue in a solid, entertaining rant. It’s one of the nice things about having a shared universe spread out among so many different authors. Even the descriptions of persons and actions seem very noir.

And when the description says that this is a pulp superhero adventure, this is less the Shadow, and more Flash Gordon. We even have an evil emperor who has magic powers (come now, Ming could walk through fire, and the “science” was more magic than anything else), as well as other super powered lackeys to do his bidding. And much of the villains look like they utilize a combination of mad science and magic in order to wield unearthly forces at their command.

… And yes, I did recently watch the complete Buster Crabbe Flash Gordon serials. Why do you ask?

As for our characters … When we meet heroes Jason and Matthew, it’s fun watching the inevitable train wreck coming their way. One of the opening scenes involve locking the two of them in a room together so they can get to know each other. We soon find that while they are of similar temperament, most of their opinions are diametrically opposed to each other.

I’m looking at the note I made on the Kindle edition. “We’re going to link these two at the hip, aren’t we?” Yes, yes we are. And we’re going to give them the code names of Castor and Pollux, because JD is that literate, and superheros are just that subtle.

So we have another, well developed world, and evil dictator wielding magic to rule over the world. We have random encounters and fights with potential friends.

Over all, I enjoyed it. Do I think it’s the best of the heroes thus far? Nope. I think that award goes to the next in the sequence. In any sane system, It would be a mid-range novel — a solid setup to an interesting universe that I would get the next books in order to see where it ends up. But given that Amazon has turned a 3-star rating to “critical,” (No, Amazon, I LIKED this book) I’m going to have to give this 4 out of five stars.