When I was sitting next to Karl Gallagher at LibertyCon, he mentioned that Torchship was about his day job (yes, he is a rocket scientist), and that The Lost War was about his hobby.

It was supposed to be a weekend of costumed fun. Instead these medieval historical reenactors are flung into a wilderness by magic they don’t understand. They must struggle to survive and deal with monsters who consider them prey . . . or worse. 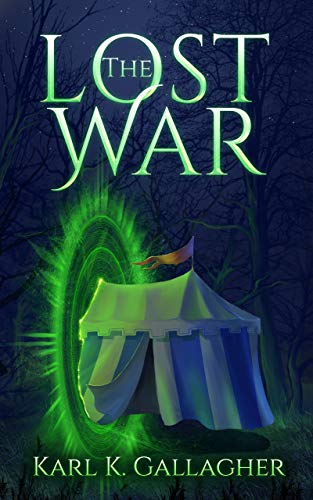 Buckle up. This is going to be fun. This was my fantasy pick for best fantasy for the Dragon Awards in 2019. It is awesome, and you are going to like it. And if you don’t, you’re wrong.

Our main character is Newman Greenhorn — and if you can’t tell that he’s a newbie at a gathering of the Society for Creative Anachronism, now you know. When his girlfriend brings him to the pagan circle on the first night, well, what’s the worst that can happen?

This. This is the worst that can happen.

If you’re thinking “SCA surviving in a fantasy landscape. Hmm, sounds like John Ringo’s Council Wars”…. that is a very superficial view of it. Let’s put it this way, when I read Karl’s Torchship trilogy, I said in a review “Well, if David Weber ever needs help finishing Honor Harrington, maybe he should take to Karl.”

Having topped David Weber, Karl has apparently decided to top John Ringo. And I don’t even mean the Council Wars. Because there is a very specific reason that Newman and the camp have been brought over to this new world. The world has a problem, and the humans are to be the pest control. Thank you, rotten, mutha-bleepin elves. (Yes, think Posleen. Only worse).

However, the plot is not what got me started on thinking about John Ringo. There is so much readable logistics in this book, it’s amazing. There is a ton of effort put in on how things get done — are the flora safe? Are the Fauna safe? The amateur astronomer who confirms, “Yes, the stars are different. We are not in Kansas anymore, Toto.” “Oh look, here are piles of bones, we can deduce that we aren’t the only hunters out here.” There are considerations about medicines, hygiene, resource consumption, resource allocation, down to “How do we make soap?” and the question of law enforcement. Karl does a great job of setting up the situation, the variations of reactions to the setting, the governing of the new world — both official and unofficial. You can see how it feels a bit like a Ringo novel, as he’s one of the few I can think of who can recreate and rebuild an entire society that completely.

Also, I dare you to find someone else who will deal with fantasy parasitology, microbiology and serology.

AND EVERY LAST MINUTE OF IT WAS EASILY READABLE AND ENJOYABLE. Unlike most geniuses, Karl writes plainly and easily without dumbing it down.

The character of Newman himself is … a lot of military guys with two brain cells to rub together. (Which seems to be most of them — I’ve only met one or two I wouldn’t trust to breath into a paper bag.) Down to one section of “I’m more comfortable with strangers trying to kill me in the wild than dealing with protocol for nobility. Your excellency.”

It was perfect. Down to the placement of the period.

There is a lot of easy character development. At least one character became my favorite in a one-page description (look for the character of “Burnout.” I suspect she is a PA).

And then human beings start developing magical powers, and we have SCA X-Men.

This leads to some interesting moments, including several instances where the characters make a deduction, follow through on the deduction, and it is apparent to the reader what is going on — and it is AT NO POINT SPELLED OUT FOR THE READER. Because Karl figures that the reader also has two brain cells to rub together. And he’s right. I didn’t have to be told what was going on … in fact, I had to double back to make certain that Karl didn’t spell it out. It’s great writing.

And it’s so nice when a character calls out “Thalassa!” and I know what the bleep he’s talking about.

I have only one problem with the book — no chapters. The novel is more or less one continuous work. Luckily, I read quickly, so I didn’t have to lose TOO much sleep.

Anyway, as I said, a great book, brilliantly executed, and I’ve already finished books 1 and 2 this weekend. I hope to have the sequel reviewed by tomorrow. I’m hoping there’s a book 3.

1 Response to Review: The Lost War