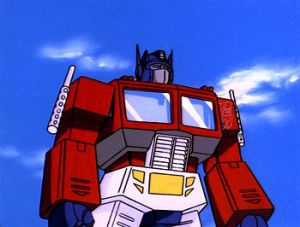 It’s the distant future, the year 2015. We may not have flying skateboards, but you know what we do have? COMBAT ROBOTS. Sorta. Lemme back up a second. See, once upon a time, the Japanese robotics company Suidobashi Heavy Industry made a robot: buyable for $1.3 million, it weighs almost five tons, can be outfitted with dastardly weapons like twin BB gatling cannons or a water bottle cannon, is over 12 feet tall, and is programmed to fire when its operator smiles.

Japan. I tell ya.

So that’s all well and good, but the Kuratas has been around for a while. Why is it notable now? Well, see, we’re about to witness some good ol-fashioned robo beatdown.

Enter MegaBots, a startup company bound and determined to make robo-battling a reality of our glorious society. After an unsuccessful Kickstarter that attempted to raise the money for two paintball-wielding robots, MegaBots pulled together enough money for a demonstration bot…and then made the video above. They challenged Suidobashi to a duel. A robo-duel.

“But my reaction? Come on guys, make it cooler. Just building something huge and sticking guns on it, it’s…SUPER AMERICAN.”

Unfortunately, there’s no date set for the robo-duel yet, but we will be on the scene to keep you posted. Until then, you’ll just have to make do with this…

2 Responses to Not Quite Gundams