I watched a few anime during the Spring 2016 cour, and while I could do full reviews, I think it makes more sense to gather them all up in one place. I’d like to focus on four shows that I watched from this cour, shows that covered a wide variety of styles, content, and themes. I try to find interesting (and even eclectic) shows to follow, and I hope you enjoy them as well. Get ready for a trip through this past season of anime! 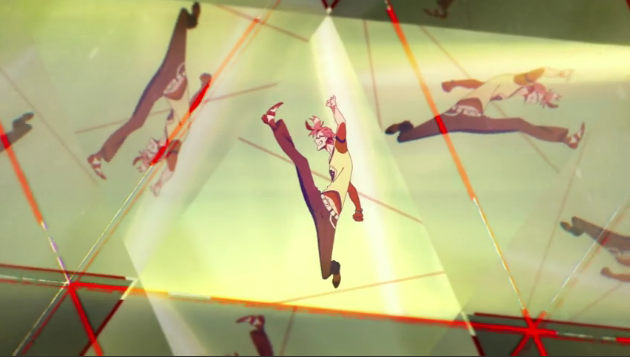 Kiznaiver
What got my attention about Kiznaiver wasn’t the premise, but the studio behind it: Studio TRIGGER. They’re a branch off of the animation studio Gainax (most famous for Neon Genesis Evangelion) who came together under the leadership of the director who oversaw Gainax’s over-the-top mecha series Tengen Toppa Gurren Lagann. They’ve since made a variety of shows (their best-known recent show is probably Kill La Kill), and their signature style tends to be bold, exaggerated, and dynamic. Kiznaiver didn’t exactly live up to that, though.

It’s a sci-fi story about seven highschoolers who are bonded together by a process that links their pain: when one of them feels pain, it’s instead distributed among all of them. The only exception is the main character, who can’t feel pain at all for some strange, totally-not-plot-relevant-at-all reason. I was caught off-guard because (aside from one or two sequences), the show felt a lot more grounded than other Studio TRIGGER that I’d seen. Ultimately, it does some deep dives into relationships and what it means to have pain and to share pain with others.

On the downside, it doesn’t quite mix all that fantastic stuff very well with its metaplot, which is way too grand-scale and (at times) gratuitously bombastic. So the show’s ultimately a mixed bag. The sum of the parts isn’t great, but there are some wonderful parts within the series.

Content Advisory: injuries, including blood; a pair of isolated scenes of unwanted sexual aggression; some violence 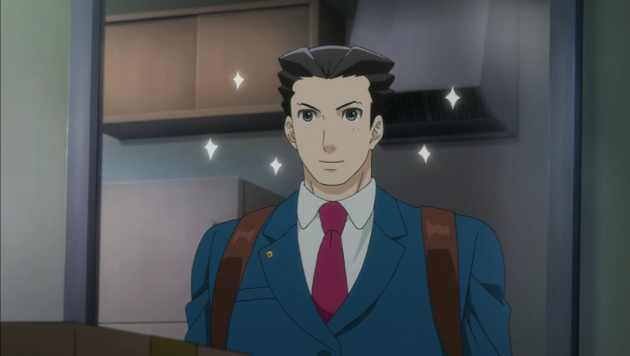 Ace Attorney
Ace Attorney is based on the similarly-named Capcom games (better-known in the USA as the “Phoenix Wright” games, after the English name of the main character), and I did a review of the series after watching through the midpoint. Now, I’m here to finish the job. Does the show hold up after all, or does the cour finish out somewhat disappointingly? (In advance, I’d like to make note that the show is immediately continuing on into a second cour as of the Summer 2016 anime season. I will not be covering any of that cour in this mini-review.)

Ultimately, Ace Attorney doubles down on what it is, and if you liked the first half, you’ll be onboard for the second half as well. It’s hyper-dramatic and theatrical, with some understated comedy in the presentation of the trials (and some genuinely silly witnesses), although the last trial felt a little too convenient in terms of the way everything wrapped up. Ultimately, it’s somewhat like a slightly goofy, off-kilter soap opera that takes place largely in the courtroom, although it hasn’t quite reached the plot twist level of soaps.

It executes pretty well, though! The animation is hardly stellar, but it’s serviceable (considering the standards of modern anime), and the music serves the dramatic tone of the show pretty well. It’s worth checking out, I think, and you should be able to tell within the first four to five episodes whether it’s something you’ll want to keep up with.

Space Patrol Luluco
Remember how I brought up Studio TRIGGER earlier in this post? That’s partially because I watched two TRIGGER shows this season, and they were dramatically different. Space Patrol Luluco is the Studio TRIGGER I expected. It’s vibrant, zany, and over-the-top in pretty much every aspect imaginable, and I later learned that it’s an anime they made in commemoration of their five-year anniversary. As such, it does benefit from having knowledge of their other shows for the full impact, even if you haven’t seen them, especially because a portion of the show gnxrf gur znva punenpgref ba n wbhearl guebhtu ubarfg-gb-tbbqarff pnzrbf bs cerivbhf Fghqvb GEVTTRE fubjf.

Space Patrol Luluco‘s titular character, the middle-schooler Luluco, is a young girl who unfortunately just wants to live a normal life. That lasts all of……one minute, 52 seconds, if you count the opening credits. She’s quickly conscripted into the Space Patrol, which goes around dealing with Space Crime™ through means of comically extreme prejudice. What’s a middle-schooler to do, amidst cosmic hijinks and dramatic revelations?

Ultimately, it’s a wild ride that works out because of its audacity. It even, in typical Studio TRIGGER fashion, manages to hit some delightful notes about the human heart. A lot of its humor does rely on referential knowledge, and it’s partially a nostalgia trip for the prior works of the studio, but the bulk of the referential content is actually contained to about a quarter of the show, and the rest stands fairly well on its own.

The best part, though, is that the show’s episodes are 5ish minutes long, so you can breeze through the series very quickly.

JoJo’s Bizarre Adventure, Part 4: Diamond is Unbreakable
Unlike the other shows, Diamond is Unbreakable is the latest arc in the massive JoJo’s Bizarre Adventure saga, which I got into a couple years ago. It’s striking, colorful, and stylish in a way that few shows are, and I’ve been immensely enjoying myself with it so far. Each part of the show has focused on a different story in a world of strange superpowers and characters named for 80s rock bands (lest you think I’m joking, there are characters named after REO Speedwagon, AC/DC, and Ronnie James Dio, among others), but there are connections between each part of the show, giving it a sort of “legacy” element.

This latest arc focuses on Higashikata Josuke, a high school student who’s a bit of a dandy. Also, he has an awesome power. (If you’re curious, he can erpbafgehpg nalguvat gung’f orra oebxra, vapyhqvat orvat noyr gb ercnve vg.) This arc features his adventures as he comes face to face with villainous superpowered people in his little town. So far, there hasn’t been much of a larger metaplot (compared to earlier parts of the series), but it’s been a very enjoyable episodic show, and it’s a delight to explore all the characters introduced here.

The really cool thing about the powers in this arc is that they’re all represented as “Stands”, (usually) humanoid figures that are invisible to normal people. (Incidentally, the original author of the manga came up with Stands thanks to the X-Men! He was inspired by sequences in which Professor X enters psychic combat by entering the Astral Plane and projecting an armored version of himself.) This adds a really cool visual element to the show, and it’s beautifully flashy. The idea to personify characters’ superpowers makes the show a lot more memorable, and it adds a strong personal flair to the show.

It’s a delight to watch (the latest arc has some delightfully strange color palettes), and the show also hits some very resonant personal points–it seems like it might be lighthearted, but we’ve had episodes that dealt with death and grieving, mistrust, and even psychological abuse. It’s still designed as a show targeted towards a younger set, but it hits some incredibly salient points. Well worth a watch, and if going in for the long haul is intimidating, you can jump into Part 4 without being too disoriented.

Content Advisory: blood, violence, and some Fates Worse Than Death

8 Responses to Spring 2016 Anime: What I Watched