A Taste of Fandom: A ‘Geeky Chef Cookbook’ Review

(Full disclosure: I am not being paid for this review. Just my own honest opinion.)

I seriously doubt there is not a geek out there who has wished to stepped into their fandom for brief moment. I will fully admit that I have wanted to go and visit Middle Earth, or fly in an X-Wing. With Cassandra Reeder’s The Geeky Chef Cookbook: Real-Life Recipes for Your Favorite Foods – Unofficial Recipes from Doctor Who, Game of Thrones, Harry Potter, and more geeks around the world get the opportunity to at least get a taste into their favorite world. 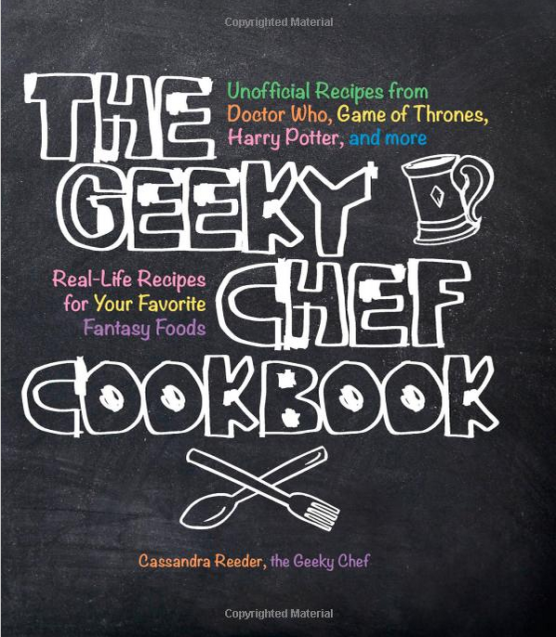 Making the same dishes your favorite characters are eating can be fun. I have done this before with Nero Wolfe (note: this is not in the cookbook); he has a very specific way of making corn. According to him boiling corn is an atrocity that many American housewives commit every night. The only way to cook corn is to roast it, and he is right! Go check out Murder is Corny by Rex Stout and try the recipe!

Before each recipe Reeder has a brief introduction about what inspired and how she came up with each recipe. There is a lot of thought that goes into the development of each recipe. For this review I made the lembas bread which, of course, is from the Lord of the Ring trilogy (shame on those who did not know that). Reeder explained that she was trying to accomplish what was said about lembas in the book, how it was very filling with the smallest bite. I doubt that Frodo or Sam would have gotten very far on their trip to Mordor without this foodstuff. There were only two ingredients that I usually do not have on my regular shopping list and those were macadamia nuts and whey protein powder. At first I was little confused with the use of the whey protein, but then it clicked in my brain – that is what makes it so filling.

I made one goof, nothing too bad that would lead to the kitchen exploding, but the pan I used was not wide enough. The result was that my lembas bread was very thick, as in you need a fork to eat it thick. However, taste wise it was very yummy.

How yummy you ask? Let’s just say that my family descended upon the lembas bread like a group of adventuring Hobbits. Will I do this recipe again? Yes, indeed I will, with the proper size pan even. It makes a wonderful breakfast item.

As I mentioned before Reeder put in a lot of thought to the development of the recipes going to original source material for inspiration and to make it as close to the original as Earthly possible. She covers a wide variety of fandoms ranging from Star Trek and Star Wars to Game of Thrones and Discworld. Video games are not excluded with recipe inspirations from Minecraft, Pokemon, and Kingdom Hearts to name a few. I must confess the recipe that sealed the deal of me getting this cookbook was the recipe for Spoo from Babylon 5. I almost became one with my innerself right then and there! 😉

There are a handful of recipes that require some hard-to-find ingredients which may require a visit to a specialty store or two, but I feel that it does not detract from the enjoyment.  The lembas recipe was relatively easy to follow with no overtly complicated techniques (which can be said for all the recipes in the book).  I will caution those who have a knack for burning water or have zero experience turning on an oven to find a fellow geek who a bit more comfortable in the kitchen to help out.

I highly recommend this cookbook; it is very shiny. My only disappointment is that the recipe for Soylent Green did not list human in the ingredients list.

A (Jedi) Master of Library and Information Studies, who creeps along in dusty archives learning about the past and making sure things are not lost to time and neglect. A cradle Catholic who geeks out over her faith, sci-fi, fantasy, and meeting other people who do the same.
View all posts by Olivia Bushey →
This entry was posted in Reviews, Uncategorized and tagged Cookbook, Fandom. Bookmark the permalink.

1 Response to A Taste of Fandom: A ‘Geeky Chef Cookbook’ Review