Why I’ve Got My Eye on Codex

Because there’s a card called Nautical Dog, with the flavor text “They found him in a lake.” That’s why. End of post. Also, the card that gives you ambush sharks.

More seriously, Codex is a game that I’ve had my eye on for a long time; it’s been in development for a good long while (I should know; I hunted down a bunch of old blog posts from the designer about it), and there are a great deal of things that I love, both about its design approach and about the way the game works. It’s not going to be for everyone (and I’ll get into that below the Read More cut), but I think it’s going to be a really cool game that does some awesome things.

So will Codex appeal to you, to begin with? It’s definitely not designed to be something that just anyone will like, so whose preferences does it cater to?

It’s definitely got a lot to it, and if you’re the sort of person who enjoys a challenging learning curve and a game that will test your wits and planning skills, this is something you might be interested in. And it’s not all serious business; there is, after all, a Fruit Ninja in the Starter set. No, seriously. There’s a Fruit Ninja.

Does any of that sounds interesting to you? Read on!

Ultimately, Codex is about two forces clashing, each trying to destroy the other player’s base. Your base has 20 health, and your opponent can use their units to chip away at that health, 2 and 3 attack at a time, depending on how strong the unit is. (For example, the Fruit Ninja above has 2 attack and 2 health.) Of course, you don’t like this, so you can also use your units to destroy your opponent’s units before they can destroy your base, so that you can destroy their base instead. That’s the core of the game. But it’d be kinda boring if that was all there was to the game. So you have cards with special abilities…

…and you use those cards to start making powerful strategies from cards that work well together. You find cards with useful functions, balance them with cards that let you attack, and try to find ways to use your cards as, well, force multipliers. So that’s the basic idea behind how Codex, and how pretty much every CCG (collectible/customizable card game) works. But there’s one major difference: here, you build your deck of cards as you play the game. 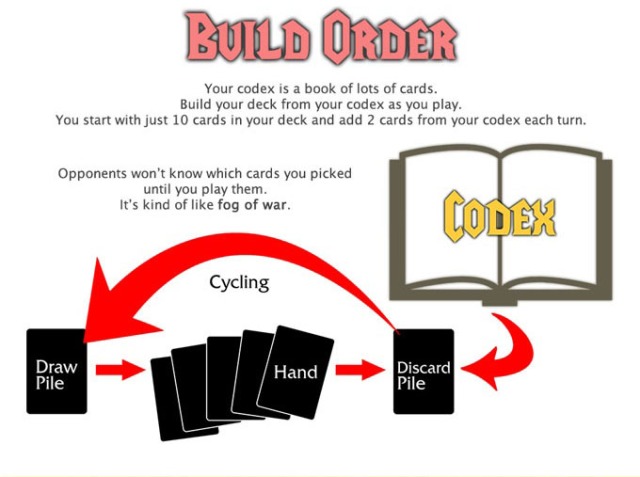 You have a binder of cards (your “Codex”), and every turn you add two cards to your discard pile, secretly, from your Codex. When you run out of cards in your 10-card deck, you shuffle your discard pile (including the new cards) and create a new draw pile! It’s a system that was pioneered by games like Dominion and Legendary. In Codex, it’s a really cool mechanism, because it fixes one of the big problems that CCGs can run into: drawing cards that you can’t use early in the game. Plus, it means that you can evolve and adapt your deck as you play the game, instead of being locked into it at the start of the game.

Of course, you can’t just play any card you want, and this is where the game gets a lot like a classic real-time strategy game. You have to acquire resources, then spend them on upgrades, new units, and even heroes who can use powerful abilities like fireballs and big smashy stuff. (Sure, there’s another ability that stops all combat for a turn, but it’s way more fun to hit someone with a fireball…right?)

Codex is set in the “Fantasy Strike” universe, which was developed for the card games Yomi, Puzzle Strike, and Flash Duel. In short: it’s fighting game-style fantasy, where a colonial-looking politician and a gold robot can exist in the same game as a fishguy and a panda. There’s a bit of a metaplot, with dark forces from the “Dreadlands” seeking to invade, and various characters having different responses to that. In Codex, this takes the form of six color-themed factions, each with their own gameplay style…

While the theme isn’t amazingly strong, it’s cool to have factions that can be so different; there’s currently previews for Red and Green out, and they already feel dramatically different, with Red throwing out “burn” damage everywhere and Green being able to unleash powerful beasts.

If you want to know more about Codex, you can read a bunch of articles from the game’s designer: not just articles about the way that the game works, but also some articles that talk about the games’ factions (which are demarcated by different colors).  You can also check out their Starter set, which you can obtain digitally from their store for free, then print out. It’s a pretty neat demo. Like I mentioned before, Codex is on Kickstarter right now, and based on the designer’s previous track record, the Core set (with Red and Green factions) should be coming out very soon–possibly before the end of the year!

Give it a look, and let me know what you think!

This entry was posted in Board Games, Gaming and tagged Card Games, Strategy. Bookmark the permalink.

3 Responses to Why I’ve Got My Eye on Codex