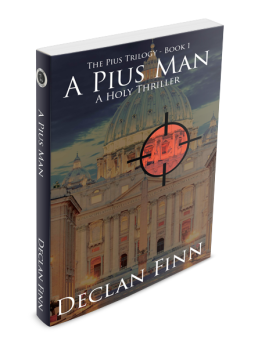 The other day, it was mentioned that A Pius Man: A Holy Thriller was coming soon from Silver Empire Press.

At which point, I’m certain that the first question on everyone’s mind is simple … starting with, “Why is pious spelled wrong?”

Now that the book is available for preorder from the publisher, it should probably be spelled out a little better. The really short version is that I am a specific kind of Catholic geek: a history geek. I have a dual BA, in history and Catholic philosophy, and an MA in history — mostly because history has tales more outlandish than any I could come up with while writing thrillers. It was going to be a tool in a writer’s toolbox.

Along the way, I came across the usual BS about and around Pius XII. One of my graduate classes was “The History of Total War,” so I thought I would use it as an excuse to do some research. Three months, miles of microfiche, and a stronger eyeglass prescription later, I had a forty page research paper, with 7 pages of endnotes.

And boy, was I pissed.

I had grown up with a ton of lies around this particular topic, and the best way to piss me off is to lie — to me, about me, it doesn’t matter. And the truth MATTERS. It’s one of the reasons why I loathe politics, since that worships sophistry above truth.

But, I had a solution.

At this point, I had already written about a dozen novels that I hadn’t published yet. I had a universe in my head. It was filled with characters, biographies, events, and how people were linked together. Doesn’t every writer? When I started A Pius Man in 2004, I figured that more people had learned fake history from Dan Brown than they had for the duration of their education. And I had a history degree, experience with fight scenes and shootouts; my characters were already more interesting. I could do this! I can actually slip in history between the fight scenes, and wouldn’t that be awesome? This would be easy.

And then it spiraled.

800 pages later, A Pius Man had every character I had ever created, as well as a small history of World War II, the Cold War, modern Europe and the Middle East, a political science paper, six shootouts in and around the Vatican, a kidnapping, a trial, a full scale invasion, and a body count to rival the entire 24 TV series.

There’s a reason why my writing career can be summed up by “an then it spiraled.”

Before then, I never knew that “I can do better than THAT hack,” is actually writer speak for “hold my beer.” I had apparently created a Spetsnaz Moriarty and didn’t realize it at the time. He just wouldn’t die. Along the way, I wound up with discussions on faith, holding the line when it’s “just principles” at stake, and when it’s more important to die for what you believe in than taking the safe way out. Some of my heroes were normal, everyday folk. Some were just plain insane. So let’s send them up against an Army of Darkness without any chainsaws or Bruce Campbell, because why not?

After wasting time going for a PhD at a Bronx college that shall remain nameless, as well as plenty of rewrites, I had a trilogy on my hands. I ended up with an agent at the worst possible time — when it was slowly becoming evident that Traditional Publishing was dying. Random House had literally had a a minor bloodbath only a few months before, and employees had been fired in the ten-thousand range in one month.

There’s a reason I believe in the Nicene Creed and Murphy’s Law …. usually in that order.

Fast forward through six more years, self publishing, a half-dozen cover changes, five friends who will never talk to me ever again, and we come to last year. After Russell Newquist Silver Empire held a gladiatorial competition between me and Brian Niemeier for his Dragon Award vote, he read A Pius Man. I believe I had joked if he would be interested in it –which would include reediting it, rereleasing, recovering, the whole nine yards.

And here we are.

This is the short version. The long version is … really long.

Over the next few weeks, there will be free sample chapters posted to The Catholic Geeks. You’ve been warned.

Declan Finn is the author of Honor at Stake, an urban fantasy novel, nominated for Best Horror in the first annual Dragon Awards. He has also written The Pius Trilogy, an attempt to take Dan Brown to the woodshed in his own medium -- soon to be republished by Silver Empire Press. Finn has also written "Codename: Winterborn," an SF espionage thriller, and it's follow-up, "Codename: Winterborn." And "It was Only on Stun!" and "Set To Kill" are murder mysteries at a science fiction convention.
View all posts by Declan Finn →
This entry was posted in Fiction, Mystery, Thriller, Uncategorized, Writing and tagged Pope Pius XII. Bookmark the permalink.