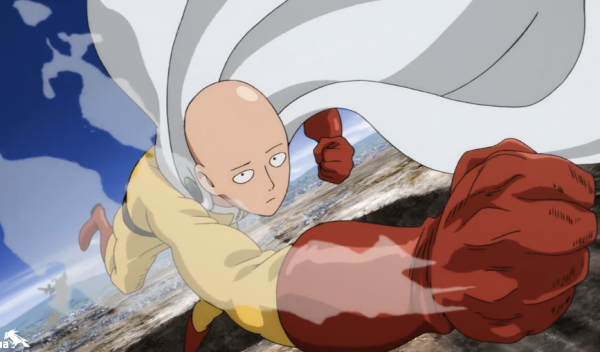 One Punch Man is an anime from the Fall 2015 cour based on a webcomic that turned into a manga. It’s a comedy superhero show that comes out and manages to pay tribute to everything we know and love about caped heroes, while also tongue-in-cheek making fun of it at the same time. It’s one of those parodies that only works because the people involved are such fans of the source material to begin with, and that’s good, because otherwise there’s no way the premise should be able to work.

(This will be a spoiler-free review, as usual.)

What is “One Punch Man”?

Saitama, once an overworked Japanese salaryman, is now a veritable juggernaut. As the title of the show might tell you already, he’s so powerful that he only needs one punch to best the most formidable opponents. Towering monsters explode beneath a single blow of his fist, and he wasn’t even putting all that much effort into them. He’s practically invincible, and practically every episode delights in building up to an anticlimactic finish where he punches the monster and they get obliterated.

“But that sounds so boring!”

Well, it is. And nobody’s more bored than Saitama. Do you see the face of that man in the picture? Saitama is the very picture of modern ennui, because ever since becoming the Superman of anime/manga, he hasn’t met a single person who took more than a single punch to defeat. And that’s where the fun of One Punch Man begins, and what makes it more than the same gag played out over and over again.

Why One Punch Man is Good

From the get-go, One Punch Man is entirely self-aware. It knows how ridiculously powerful its main character is, and it doesn’t hesitate to let him exercise his full power. The first few minutes feature Saitama yelling in frustration because he just won a fight with a single punch! From there, we see a picture of Saitama’s character: fed up with the boring state of his life, and filled with an almost crippling apathy. While it’s played for laughs, it’s also a very understandable characterization, and it’s a welcome relief from the Savior Complex that the USA sometimes gives to its own omnipotent characters. On the surface, Saitama doesn’t have any pretensions of godhood; he claims to be a hero “for fun”.

That’s where the show builds from. There’s actually a lot more to Saitama, even if he doesn’t express it overtly, and the show finds a lot of material in exploring the relationships he has with other heroic figures in the city. It also devotes a large amount of time to the stories of the people who, by all rights, should be living in Saitama’s shadow. Of course, whether or not he ought to be there, Saitama still winds up accidentally playing second fiddle to the other superheroes of the city, with some clever narrative tricks, which lets the other characters shine as well.

The show also has ample opportunity to touch on the most important question of superheroics: what makes a hero? If the answer is “power”, then surely Saitama would be the most heroic and admirable character in the show. Instead, One Punch Man shows us an ensemble of flawed but earnest characters, making us consider who they are and what they’re made of. Instead of building the story by placing obstacles in Saitama’s path, One Punch Man finds ways and time to give attention to the supporting cast, which in turn sheds light back on Saitama’s character. Is he all that heroic? He’s powerful, but does he have true strength? While these questions aren’t explicitly stated, they form a strong thematic undertone for the series.

Other Odds and Ends

I mean, that’s not the only great thing about One Punch Man. The production values on this show are incredible, for one. Visually, the animation is fluid, colorful, and detailed, and it’s gorgeous to behold when they put together a major fight scene, which happens in the majority of episodes. If you like to watch cool fights, you’re in for a treat here. Musically, while it’s not a sublime soundtrack, it’s hard to think of any other soundtracks (aside from the Gurren Lagann soundtrack) that make me feel so pumped-up and ready to go fight evil, and that’s a good thing for a superhero show!

I also appreciate the fun that the creators had with the character designs. Every superhero has their own gimmick, from Genos the flame-wielding cyborg to Child Emperor (who walks around by using a spidery robo-exoskeleton) to Mumen Rider (whose superpower is…riding a bicycle and having a powerful sense of justice!). In fact, check out the design for Mumen Rider, who by all rights should be the most boring character around…

He’s the guy on the right. Check out all the different things that go into his design: the colors, the different pieces of body armor, and the general logical attention to what a bicycle-centered superhero would have. It’s things like this which make the world of One Punch Man come alive. It’s a weird, funny, vibrant world, and exploring that world is a massive part of the attraction of the show.

One Punch Man is a show not about overcoming challenges but about doing a character study of the superhero genre. It’s at once a gag-based comedy and a wry deconstruction of superheroes, especially when it comes to DC Comics. It’s an inertia-filled action romp that turns action shows on their head by solving the problem in a single blow, and yet it still gives many fights a real sense of drama by focusing on events before the main character shows up.

Do be warned that there’s strong amounts of animated blood and gore (against inhuman opponents, Saitama’s strength is explosively potent, literally), and for various reasons, I think about half the episodes have some guy (as in, a male dude) randomly winding up naked (with strategically-placed items in the scene, naturally). So for those reasons, it also won’t be for everyone. But I found it to be a fantastic, exciting, funny caper through the land of superheroes, and hopefully you will too.

You can watch One Punch Man for free at Hulu and the Viz Media streaming website.

This entry was posted in Reviews, Superhero and tagged Anime, Comedy, Superhero. Bookmark the permalink.