This is what happens when the biggest film franchise of all times meets the safest children’s toy of all time. 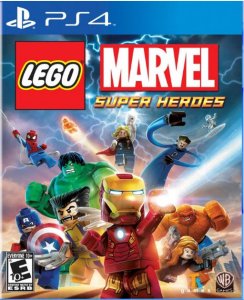 The Silver Super has been attacked by Doctor Doom and his Legion of, well, Doom. His cosmic surfboard has been broken up into cosmic … bricks. To stop the scheme, the entire Marvel universe must come together and stop Doom. But he’s hired every villain in the entire Marvelverse to collect the bricks.

Oh, yeah, did we mention that the Silver-Surfer’s boss, Galactus, eats planets, and is coming to Earth to see what’s holding up the Surfer?

This is very simple while doing a lot of things at once. One button will switch from one character to another (thus far, Maximum has been 3 on the screen at once).  The same button to switch characters can also allow you to change the character into different forms (Hulk to Bruce Banner, Spider-man to Peter Parker, etc), or, holding it down longer in free-to-play sections can lead to choosing from the expanded cast roster of over a hundred characters.  The jump button does different things for different characters — be it double-jumping, flying, or web-slinging.  The special abilities button can do something as simple as activate heightened senses (for Wolverine or Spider-Man), and holding it down arms and lets you target with a ranged weapon (Iron Man missiles or Captain America’s Shield … or Spider-man’s web shooters).

It’s a Lego game. It was fun action with lots of little puzzles scattered along the way.

The music surprised me.  I think some of these musical pieces were from the films. Yes, the soundtrack was that good. Almost epic, really. If you don’t have the various and sundry soundtracks from the Marvel films, you might want to give this soundtrack a listen.

And the graphics also surprised me.  They were beautiful.  Really.  I’m trying to figure out how a Lego game made a realistic-looking New York … well, realistic for the most part. It was surprisingly well done.

It’s a Lego game. I’m going to pretend that no one is really and honestly concerned about that.

No community, but there is co-op throughout the game.

There’s just so much to see and do in this game, it’s genuinely easy to fall in.

I love this game, but then, Lego rarely makes bad games.  They’re safe and fun for kids, and relatively easy.  You can’t even stay dead in the game.  There’s no blood, gore, foul language, nothing even remotely unnerving.

ESRB Rating:  E For Everyone.

Declan Finn is the author of Honor at Stake, an urban fantasy novel, nominated for Best Horror in the first annual Dragon Awards. He has also written The Pius Trilogy, an attempt to take Dan Brown to the woodshed in his own medium -- soon to be republished by Silver Empire Press. Finn has also written "Codename: Winterborn," an SF espionage thriller, and it's follow-up, "Codename: Winterborn." And "It was Only on Stun!" and "Set To Kill" are murder mysteries at a science fiction convention.
View all posts by Declan Finn →
This entry was posted in Fiction, Gaming, Reviews, Superhero, Video Games and tagged Bruce Banner, Doctor Doom, Hulk, Lego, Lego Marvel Super Heroes, Marvel Comics. Bookmark the permalink.