Karina Fabian on Mind Over All

Author (and Catholic Geek) Karina Fabian has finished her massive, world-bending trilogy on the scope of Dune …. without the obvious money-grab continuation books. She has submitted herself to an interview.

I’m even going to be talking on the radio show with her this coming Sunday, August 9th.

I expected to be a little sadder than I am, actually. I started writing and imagining these adventures – wow – 30 years ago, so really, I’m just glad they are out in print. I hope they find their way into the hearts of many readers.

Q  Have you ever met someone who looked just like one of your characters? What did you do?

I am not a big visual thinker, and prefer not to define my characters’ looks too closely. That’s one reason I hate playing the “what actor would you have play…” game. Having said that, it did happen once. The closest I ever came was when I was actively trying to find someone who looked like Joshua, and I saw a man in a restaurant. I surreptitiously tried to memorize his features…then decided he didn’t look as much like Josh as I’d thought.

Q: How did this book start?

In college, I had the opportunity to write a short story for a final project for a SF literature class. I wrote about a young psychic who accidentally teleported to another planet, met and married the queen, and saved their world. The professor thought I should make it a novel, so I spent a year doing that, then submitted it and racked up rejection letters until I joined the Air Force and put it away. 15 years later, I decided to revamp it. I looked it over and was flabbergasted. The characters were clichés and the plot was thin. So I rethought it: How would someone really react to developing psychic powers? He would not be a cool, well-adjusted college kid. By the time I got done giving Deryl problems associated with his abilities, I had to commit him, and that’s when the story got fun.

Q: We see a lot more of the planet Barin in this book. What can you tell us about that without getting into spoilers? 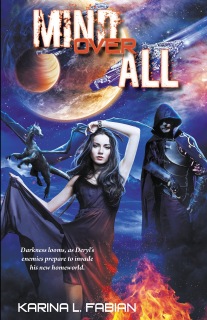 I’m still figuring out Barin, myself. It gave me a few surprises while writing this book, in fact. For example, I didn’t realize how much they understood what the Miscria was doing to their planet. The religion was especially fun to imagine. God is omnipotent and omniscient and unchanging, but how we understand God is influenced by our world. So how does a population of a planet thrown off its natural path see God? A lot of it had to do with “following the right path,” and it was fun to incorporate it into everything from their prayers to the carpeting. The floors have paths drawn or dyed into them. People walk on this path as a matter of faith. In the temples, to step off the path is blasphemy.

Those who have read the first two books know that Deryl was being manipulated by the Master to be a weapon – specifically to kill the Miscria. In the second book, we see a hint that he’s actually part of the Barin’s theology. He’s not just the guy who would save them by killing the enemy, but Deryl, Sacred Weapon, the Path Forger. He’ll have to embrace that role to save both worlds in this book. It was a lot of fun to write, especially since he drags Joshua into it as God’s Mercy, Path Smoother. (Josh is mortified.)

One of the first scenes I thought up for this book was when Joshua and Deryl have to cross a narrow stone bridge over an active volcano. I won’t tell you how they do it, but it was a fun scene.

Q: There’s a Pro-Life message in this trilogy. Did you set out with that in mind?  You’re not a Puppy Kicker, are you?

I never write a story with a “Message” (capital M) in mind. I start with a character or characters, put them in a situation, and let them work their way out of it. What they learn and what they teach – their message – is up to them. Having said that, I knew from the beginning that there would be a theme of peace in the book. Deryl was not a murderer, no matter how hard the Master tried to make him one by manipulating his mind. The thread about abortion came out of the blue. That started as just another “rock” I threw at Joshua to make him a better-rounded character, but as his character grew more important to the book, so did the issue because it was very important to him. As far as he was concerned, he had lost a child, had it stolen from him. It took more than getting away from his ex-girlfriend and falling in love again to heal that. While not every father may feel that way about their unborn child, some men do. I didn’t intend for this to be in the book, but since Joshua needed it there, I’m hoping that other men in this situation might find this trilogy and get something out of sharing in Joshua’s struggles. And maybe some women might read this and decide to give their boyfriends a chance to “man up.” Even so, I didn’t plan a message and I don’t want the book to be about a perceived message. It’s a great story.

Q: What was your favorite scene to write?

There were a lot of them. I enjoyed Deryl getting a power rush. It was a challenge to think like someone with phenomenal cosmic power without going into clichés. Probably my favorite bit is when he is healing Tasmae and being so Above It All, but then a little bit of human maleness creeps in and he decides he isn’t going to let her scar because he likes touching her perfect skin. That moment of physicality calls him back from the brink.

Q: What was the hardest part to write?

Joshua was a challenge this time. In the first book, my editor accused me of making him too perfect – too sweet and understanding, too good at things… This time, my editor (different editor) thought he was too harsh, not understanding enough. She thought his reaction to finding out about Sachiko’s abortion was not in character. My first reaction was, “Maybe she don’t understand how much this played on Joshua’s own past and his insecurities and…”

Then I remember what my very wise husband told me when we were editing Infinite Space, Infinite God: “It’s not the editor’s job to understand; it’s the author’s job to make herself understood.”

I rewrote a few scenes, added a couple more. I gave a little more backstory and thought – things I hadn’t done because I was afraid it would take away from the main story, which is about saving Kanaan and Barin. However, the book is stronger for it, and I think – I hope – I’ve helped the reader better understand what Joshua is going through, and the longer-term effects of Sachiko’s decision to abort her child.

Q: Will there be more books about Deryl and Joshua?

I have a story in mind that involved their kids. Hope, aka, “Stormageddon,” can pull a phenomenal amount of power from Kanaan, so Deryl brings her to Earth where the energy is less so she can learn some control. Joshua and Sachiko have adopted a young girl who has psychic abilities. Dr. Malachai has gone rogue in his obsession to try to create psychic abilities, and kidnaps the girls for study. I also have some other stories that are just about Joshua and Sachiko and their kids, but I don’t know if I’ll ever write them.

Q: What’s the best way to become a writer?

Learn the craft. Write. Ask for critique and give it full consideration. Edit mercilessly. Submit your work. Repeat.

Q: What’s the best part of being a writer?

Living out the lives of my characters. After that, hearing how much people loved my stories. It made my day when a friend who is also a fan was upset that Joshua and Sachiko didn’t get married in the end. I wrote a story just about that and have published it on Amazon.

Q: What techniques do you use to effectively plot a series? Or how to you track a series?

ie: A series bible? With the trilogy, I didn’t bother, because it was just as easy to reread the books. However, I really need to make one for my DragonEye series, which includes everything from Flash fiction to novellas. Fortunately, I am in negotiations with a publisher about her taking the entire series, and the first thing she did was make me plot out a complete series progression of novels. It was fascinating to see how the everything I’d already written fits into the grand scheme I’d just made up. It’s a loose outline, though, because my characters inevitably take me in new directions. Now, though I need to go back and note character traits and times. It will probably take a year to go through. So lesson to anyone who wants to do more than a couple of books in a world: Just take the notes as you write!

Q: What is the best way to make a character seem real?

Q: What’s a log line, and do you write it first or last?

Log lines are one-liners that sum up a story or novel. I’m not especially good at them. I do them after the story is written and often ask people for help creating one that is catchy and sums up the story.

I use Word for my writing, but I keep my ideas in a program called Anthemion Storylines. It has a bulletin board interface, where you put ideas on simulated cards that you can organize. I think Scrivener has something similar. I’m pretty basic in what I do, so I don’t use a lot of programs.

Declan Finn is the author of Honor at Stake, an urban fantasy novel, nominated for Best Horror in the first annual Dragon Awards. He has also written The Pius Trilogy, an attempt to take Dan Brown to the woodshed in his own medium -- soon to be republished by Silver Empire Press. Finn has also written "Codename: Winterborn," an SF espionage thriller, and it's follow-up, "Codename: Winterborn." And "It was Only on Stun!" and "Set To Kill" are murder mysteries at a science fiction convention.
View all posts by Declan Finn →
This entry was posted in Fantasy, Fiction, Science Fiction and tagged Hearts Over Mind, Karina Fabian, Mind Over All, Mind Over Mind, Mind Over Psyche. Bookmark the permalink.