Monster-Hunting for Fun and Profit 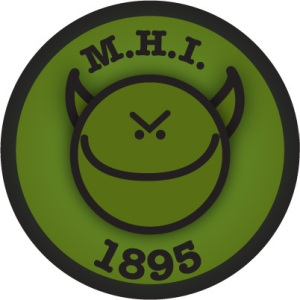 So, let’s back up a little. Once upon a time, this guy Matt (he writes for a blog about being geeky and Catholic, you might have read it) mentioned this little series called Monster Hunter International. He was kinda cryptic about it, saying that I would be indoctrinated just as soon as I finished the Dresden Files. Well, the current Dresden books, anyhow. Fast-forward a dozen Dresden books and a great many months later (also after I’d gotten my introduction to Brandon Sanderson, but that’s a subject for another post), and suddenly I find out that the first book in this Monster Hunter International series is on Kindle for free. (That’s totally not a giant wink for you to check it out. Don’t worry, this won’t be the last time I give you that link.)

And hey, I have a 1.5-hour commute via bus and Metro, so I need things to pass the time. I have a tablet computer. I figure that I’ll give it a shot. I’ve heard plenty about the author and about the book itself, so I guess it was time to see for myself. Spoiler alert: it was a blast.

What is Monster Hunter International?
So, this entire series (which I’ll be abbreviating as MHI for the sake of my poor typing hands, because that name is a mouthful) is a sort of modern fantasy story. Like many other similar stories, it rolls with the premise that the monsters which plagued mankind way back in the day (vampires, werewolves, ghouls, and so on) are alive, well, and doing nasty things to humanity. It’s a setup popularized by Buffy the Vampire Slayer and the Anne Rice novels–think Dracula, but written in the 21st Century instead. That’s MHI, except that MHI kicks down the door and blows everything up with a cluster of shot.

In the world of MHI, there’s this organization (titled, surprisingly, “Monster Hunter International”) that goes and hunts down the supernatural nasties for a big paycheck. They’re professional bounty hunters, bagging and tagging monsters (or pieces of monsters) so that they can claim big fat rewards from the US Government, who has offered bounties on all sorts of monsters. (The government has their own monster-hunting branch, but the fine folks of MHI prefer to handle things without external…oversight.) What this basically means is that the main characters are crackerjack monster-killing specialists with high-powered weaponry and a taste for destruction.

And that’s what our protagonist Owen Z. Pitt (a hapless accountant from a military family who’s actually got a strong amount of self-defense skills, including familiarity with firearms) drops into. He throws his boss out of the window, and that’s how it all kicks off. Don’t worry, there were extenuating circumstances. And to be honest, Owen doesn’t really fit the “hapless accountant” type. It’s very obvious that his personality…isn’t very suited for it.

Character Development? While Shooting Things in the Face?
Speaking of personality, there’s actually a surprising amount of character work in MHI, and that’s one thing I appreciate about it. Sure, you’re not going to get complex psychological investigations of every characters’ wants and fears, but that’s not really why you read MHI in the first place. At the same time, if MHI were nothing but brainless cardboard cutouts shooting monsters, it really wouldn’t be enjoyable, because the fundamental rule of an action story is that you have to care at least a bit about the protagonists. Yeah, MHI has that covered.

The most basic level of character work in fiction is to give each character distinctive traits and personality. MHI has a diverse palette of characters, from Tripp the former chemistry teacher to Julie the hardened veteran. Owen joins a slate of monster-hunting newbies who overall form a bizarre mix of people. Of course, this being an action story, we expect them to start gelling as a team as the book goes on, and indeed they do start to work together–and without a lot of the forced tension that sometimes seems inherent in “misfit team” stories. Owen drops in, starts learning who his fellow rookie teammates are, and they learn to kill monsters.

With a lot of action and danger and suspense along the way, but that’s a given.

What a World! What a World!
Since MHI is a book about a world that isn’t exactly ours, you’d expect some amount of attention to be given to worldbuilding. (Actually, that’s true even for non-fantasy stories–it’s just that “worldbuilding” becomes something that’s more about knowing the real world enough to give your story a solid grounding in it. Which, incidentally, is also something that MHI does, but we’ll get to that later.) First off, there’s the matter of the supernatural world that the book establishes. As of this first story, well, we don’t have a strong glimpse into the workings of the supernatural beasties and bogeys–compare this to the detailed worldbuilding of high fantasy superstar Brandon Sanderson, or even the notions of the supernatural world’s structure in the first book of the Dresden Files.

That’s probably because this is a book from the perspective of the mortals. To them, the supernatural world is dark and filled with scary monsters, with little rhyme or reason to it. And I think that works well enough for the first book, but I would like to see more exploration of how all the pieces fit together in future books. Currently, it’s a bit mishmash and haphazard: various supernatural creatures all have their own individual abodes and agendas, with very little organization or purpose. Indeed, the fact that big monster might work together is seen as an anomaly by the Monster Hunters.

That said, we get a nice slate of monsters in just the first book, and this is a world filled with the supernatural, from zombies to elves to vampires to wights, and much much more. Correia has some fun with the conceptions of these creatures, exploring how they may have adapted to the modern world. And, of course, he doesn’t hesitate to indulge in some absolutely classic tropes when it comes to the scarier monsters, playing all the horror buttons to make some truly fearsome adversaries for the heroes to gun down.

Finally, we come back to that point about the real world: MHI is an incredibly grounded book. Not only has the author found a phenomenal way to use his extensive real-world knowledge about various grades of ordnance (from handguns and rifles to high-powered explosives), but he also wields a formidably vivid vocabulary. It’s not often that I get reactions to the mere ambiance of a scene, but there’s a truly malevolent location about two-thirds of the way through the book that I cannot describe as anything less than “icky”. It’s a phenomenal use of tone to establish the mood of a place, and in MHI, even the locations have character!

How the Story Flows
Of course, it’s the narrative itself that pulls everything together. Does MHI deliver on this? Yeah, I’d say it does. Grain of salt: I’ve come to be pretty genre-savvy, so when I say that I predicted the main twist of the story, that might not mean all that much. It’s one of those books where all the clues and important information is set up ahead of time, and it gets pulled together when it becomes critically relevant to the story. And to be fair to that plot twist, I predicted it but probably couldn’t have defended my prediction 100%. And they did surprise me with a detail from the beginning of the book that I’d all but forgotten about until the main character brought it back up again–which is a pretty cool literary trick.

More importantly, the plot never feels like it drags or rushes things. The story gets super-hectic, raises the stakes, takes some time to give a breather to the reader, then plunges even further into blood-pumping action and peril. It’s pretty awesome, and it does the action movie formula even better than most action movies. Heck, I’d be completely onboard with any sort of push to make MHI into a movie or a TV series. It’d be an absolute blast. Even though the story could have degenerated into “good guys get big guns and blow up bad guys”, Correia brings a visceral danger into every pivotal sequence, keeping the main characters on their toes as they fight against massive odds to save the world yet again.

There’s just one point that I had a little bit of complaint about, and that’s something that happens pretty late in the book that seems like an over-telegraphed “nope, just kidding!” moment. It cheapens the stakes a bit, but on the other hand the book makes it quite clear that said moment is not something that should not have happened–and because of it, there were some pretty big consequences. The story does maintain gravity in spite of that, and there’s a good number of unresolved plot hooks just waiting to be picked up on in the sequels…

Final Verdict
Monster Hunter International gets a solid recommendation from me. It’s a guns-blazing piece of awesome that packs heat and grabs you for a wild ride. Buckle up, and get ready for a gritty pulp monster throwdown. Which reminds me, I gotta get on Book 2…

9 Responses to Monster-Hunting for Fun and Profit