For well over a year, various people have been telling me I need to be on Twitter. When I created The Catholic Geeks’ Twitter account, those same people celebrated that I would be able to put the “smackdown” on various other people, of the sort that I would occasionally run into on Facebook.

Well, one of the first group decided to bring one of the latter to my attention via our Twitter account.

@Catholic4Choice Sorry. The Catechism plainly states that abortion is not allowed. It's non negotiable. @USCCB @CatholicGeeks

My conclusion after looking this group over?

The fake Catholic account @Catholic4Choice is even less accurate than the media's #Strawpope. That's saying something.

But I was told that perhaps others would like to enjoy the snark, so here’s more for your reading pleasure.

This group describes itself as “A voice for Catholics who believe that Catholic tradition supports one’s right to follow her/his conscience in matters of sexuality and reproductive health.”

@Catholic4Choice: "A voice for Catholics who don't want to be Catholic, but think the name is cool." @daniellabova @USCCB

@Catholic4Choice: "A voice for Catholics who have no problem lying about a faith they don't believe in anyway." @daniellabova @USCCB

@Catholic4Choice: "We stand with PeePee and the millions of patients they gleefully murder, because God hates babies!" @daniellabova @USCCB

The Catholic Geeks’ Declan Finn was the one to suggest I put these up in a blog post. Apparently, he had a good time.

For those who don’t know, @monsterhunter45 (because they don’t make a monsterhunter50) is the Twitter handle of the one and only Larry Correia, author of the Monster Hunter series (which Andy Hague just reviewed for The Catholic Geeks). Correia is known for snarky tweets aimed at SJWs, socialists, gun control advocates, and people who think entertaining fiction is for idiots.

@Catholic4Choice: "We think our Twitter followers are so stupid they'll believe we're an authority on the Church!" @daniellabova @USCCB

As Catholics, we don't stand for abortion. @Catholic4Choice thinks Catholicism has no rules except anti-Catholic talking points.

@Catholic4Choice To be a faith-based group, you'd need to have a faith first.

To which Declan responded:

Declan, of course, couldn’t let me have all the fun. 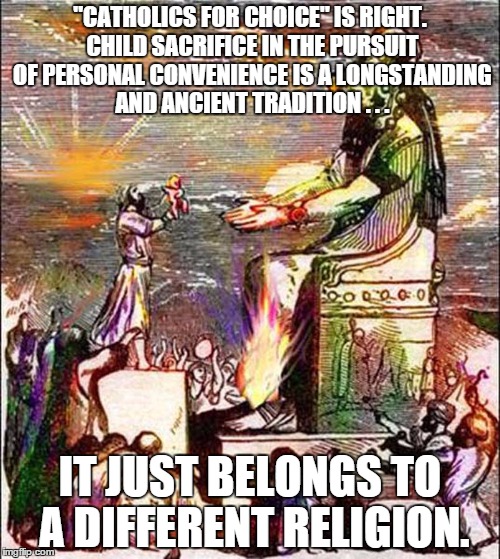 We at The Catholic Geeks like Popes such as John Paul II, Benedict XVI, and Francis. @Catholic4Choice prefers Strawpope Frank.

@Catholic4Choice Rights for all? Including the people you advocate murdering while wrapped in the mantle of a faith you don't follow?

People like @Catholic4Choice say that abortion is a right guaranteed by the Church. Funny, I've never heard a baby demand the right to die.

When @Catholic4Choice hear "Suffer the little Children," boy do they take that literally. @CatholicGeeks @daniellabova @USCCB

When @Catholic4Choice say they stand for freedom from religion, they mean they can't stand anything about their religion except the name.

When @Catholic4Choice say they stand for women's rights, they mean only women who agree with them and never the baby girl they want to kill.

Of course, all this furor right now is because today Congress looked at the possibility of removing any federal funding for Planned Parenthood, which apparently is the sole source of “reproductive healthcare” in the nation and can only function with taxpayer money.

People like @Catholic4Choice think that only government can fund #abortions, yet say the #CatholicChurch has no opinion on the subject.

When your argument is in favor of the unthinkable, it necessarily requires you to stop thinking.

Matthew Bowman is a traditionally-minded Catholic convert and freelance science fiction and fantasy editor, which means that he's in high demand in a small population. Fortunately, he loves talking about stories. And Catholicism. And history. And philosophy. And lots of other stuff.
View all posts by Matthew Bowman →
This entry was posted in Commentary, Rants, The Church and tagged Abortion, Anti-Catholic, Catechism, Catholics for Choice, Planned Parenthood, Snark, Strawpope Frank, Twitter. Bookmark the permalink.