They seek him here, they seek him there,
Those Nazi seek him everywhere!
Is he in Heaven or is he in Hell?
That demned elusive Pimpernel. 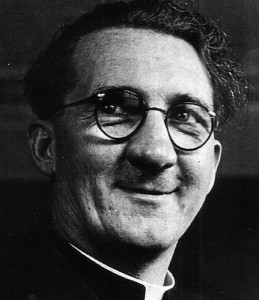 Those who know the musical are probably raising an eyebrow.  For this post I decided to go a bit old school, lest we forget the awesome Catholics we aspire to be.  I speak not of the English Sir Percy Blakeney, but of the Irish Monsignor Hugh O’Flaherty.  Similar in their methods and gall to save the innocent from the tyrannical oppressive bad guys.

I pity those who do not know of the Monsignor so I will explain. Well, let me sum up and set the stage –

It’s a beautiful day in the Eternal City with all the sights, sounds, and smells that goes with it.  There is St Peter’s Basilica, a few pigeons taking roost on top of saints’ heads.  Looking down to the cobble stone ground to avoid getting a foot caught there is something that should not be there: a white line dictating the border between the Vatican City and Rome.  There are Nazi soldiers on patrol and in full view of them is a Monsignor with round rimmed glasses saying his prayers.  This is all part of a grand hide and seek game that Msgr O’Flaherty played with the Nazi Occupiers and their leader Oberstrumbannführer Herbert Kappler (that’s a mouthful).  It would be really mild to say that Kappler really did not like Msgr O’Flaherty – really mild.

The reason that Kappler had so little love for this Irish priest is that Msgr O’Flaherty was running a highly effective escape operation for Allied soldiers and Jewish civilians right underneath the Nazi noses.  How effective?  Enough that Kappler posted snipers around the Vatican to take out the Monsignor the moment he stepped over the border.

Ok, so Msgr O’Flaherty could not leave the Vatican City.  That was a problem for anybody. I would tired of the same four walls day in and day out same as the next person.  Did this stop Msgr O’Flaherty?  As any determined person fighting against the Nazis he did what every geek would love to do against evil forces – Disguises!!!!  And what geek doesn’t like to cosplay just a bit. 😉

Not just himself, he would disguise people he was smuggling out of Rome.  On top of that he outwitted Kappler with forged documentations, and secret communication channels.  He had an entire network of people working with him, whether it be by donating money or hiding people.

Maybe it was his Irish blood, but everything Msgr O’Flaherty did he did it with outlandish style.  Seriously!  A man he had hidden in Urban College developed appendicitis. O’Flaherty borrowed a car from an important Vatican official and drove the man to Santo Spirito Hospital, where it was arranged that the nuns would quietly add the man to the surgery list. He was operated on by a German military surgeon, recovered in a ward full of German officers, and was taken back to the College by O’Flaherty.  Another time, he was visiting Prince Filipo Doria Pamphili, who had been donating secretly donating money to the cause, when Kappler suddenly arrived with a group of SS troops.  Kappler had the Pamphili’s Palazzo under surveillance and was now supervising the search to capture the Monsignor.  A tight spot, yes, the end of it all, no.  As the SS men stormed in Msgr O’Flaherty dived down into the cellar and disguised himself as a coalmen who had happen to be delivering at that point.  He walked right past the Nazi and hightailed it back to the Vatican.

Just take a moment to appreciate the guts this Monsignor had, and the style.

By 1944 Herbert Kappler had established a ruthless regime in Rome and such was the German’s desire to stop his Irish rival that he tried to kidnap and kill the monsignor and even placed a bounty of 30,000 lire on his head. Remember when I said it was mild to say Kappler hated Msgr. O’Flaherty. As you might have guessed it did not work.  It is estimated that Msgr O’Flaherty and his colleagues saved over 6,500 lives by the time the Allies arrived.

After the Allies took back Rome Kappler was sentenced to life imprisonment with no parole for his crimes, especially the massacre he oversaw in the Ardentine Caves which is considered one of the worst atrocities committed in Italy during the war.

Now here’s the part that I find most moving; within months of Kappler’s imprisonment he wrote to his rival.  It was an invitation to visit and in days Msgr. O’Flaherty did so.  Their meetings became regular affairs in which they talked of religion and literature.  After Kappler was sentence he called the Monsignor to visit.  The two men prayed together and then Msgr. O’Flaherty received Kappler into the Catholic Church. In a matter of minutes, Italy’s most notorious Nazi was welcomed into the faith by the very man he had tried to kill.

After the war, Msgr. Hugh O’Flaherty was awarded the highest honours, including a Commander of the British Empire, the Congressional Medal of Freedom and was the first Irishman named Notary of the Holy Office. He passed away in his native County Kerry in 1963 and the world mourned.  Newspapers reported his death and detailed his activities during the occupation of Rome. As a result County Kerry was host to a huge funeral.

In 1975 Kappler was diagnosed with stomach cancer and he was transferred to a military hospital in Rome.  It was here that his wife smuggled out of Italy back to Germany where he died in 1978.

On October 30, 2013, a memorial was erected honoring the Monsignor. A simple statue depicting Msgr. O’Flaherty walking with his prayer-book and hat in hand. On the wall behind in large letters a personal quote, “God has no country.” A fitting tribute to a humble Monsignor who did so much during the war.

It’s a shame that he is not more well-known.  To rectify this I recommend the following:

Enjoy learning about this awesome Catholic from the past.  May the Geek be with you!

A (Jedi) Master of Library and Information Studies, who creeps along in dusty archives learning about the past and making sure things are not lost to time and neglect. A cradle Catholic who geeks out over her faith, sci-fi, fantasy, and meeting other people who do the same.
View all posts by Olivia Bushey →
This entry was posted in History, Resources, The Church and tagged History, Hugh O'Flaherty, Nazi, World War II, WWII. Bookmark the permalink.