Ironing out A Wrinkle in time

The novel A Wrinkle in Time is a classic of children’s literature. Perhaps the proper new term is “Young Adult,” but, as with Narnia, they are books probably too good for children. In my estimation, while they are not Narnia or Middle Earth, author Madeleine L’Engle is right underneath, if not side-by-side with, CS Lewis and JRR Tolkien.

It is the story of Meg Murray and her little brother Charles Wallace, and the search for their father, a scientist who vanished. Joining them is the popular kid in school, Calvin O’Keefe as well as Weird Sisters (TM, Will Shakespeare) Mrs Whatsit, Mrs Who, and Mrs Which. These three are older women — one as very old, one as plump, and one as a ball of shimmering light / traditional Margaret Hamilton.

To find their father, Meg and Charles must travel to an alien world via folding space and time (hence a “Wrinkle”), fight an IT that makes Stephen King’s alien clown look like …. a clown… and his henchman, a man with glowing red eyes who looks like Satan’s understudy.  There’s good versus evil, saving those you love, sometimes through the power of love, and while there are Christian themes, if they didn’t bother you in Narnia and Tolkien, they won’t bother you here — assuming you even notice as you’re reading.

Now, I read this book over twenty years ago, and I should probably reread it. I’ve given you much of what I recall off the top of my head. The concept of folding space and time stuck with me, especially as I tripped over several other SFF worlds that also used it. — see: Dune. Little brother Charles is the one who I remember most fondly, since I identified with him the most. I recall him being nearly deus ex machina -level smart, and perfectly charming. Meg happened to have the same name as my sister.

All in all, a wonderful, enjoyable novel.

But you have to wonder: What did Disney do to ruin it so badly, there is nothing that Rotten Tomatoes can do to save it?

Okay, to be honest, this is probably less the fault of Disney than Oprah and Director Ava DuVernay, but one thing at a time.

Now, I’m not a stickler for films adhering perfectly to novels. Some things you can do in books you can’t do in films. Simple as that. But at the very least, I would like the filmmakers to at least have made a production that tells me that they at least READ the original novel, and understood what was enjoyable about it. At a bare MINIMUM, I would like it if I could look at the characters and say “Yes, I can tell just by looking at X that s/he is Y from the novel.”

You’ve seen the description above of the Weird SistersTM.

So of course, they cast the old / fat women as Oprah, Reese Witherspoon, and Mrs. Who is now played by (checks IMDB page) a relatively slender Indian girl named Mindy Kaling….

No, really, take a look at these images.

This is Reese Witherspoon as Mrs Whatsit … because she looks old, and covered in layers of clothing, doesn’t she? 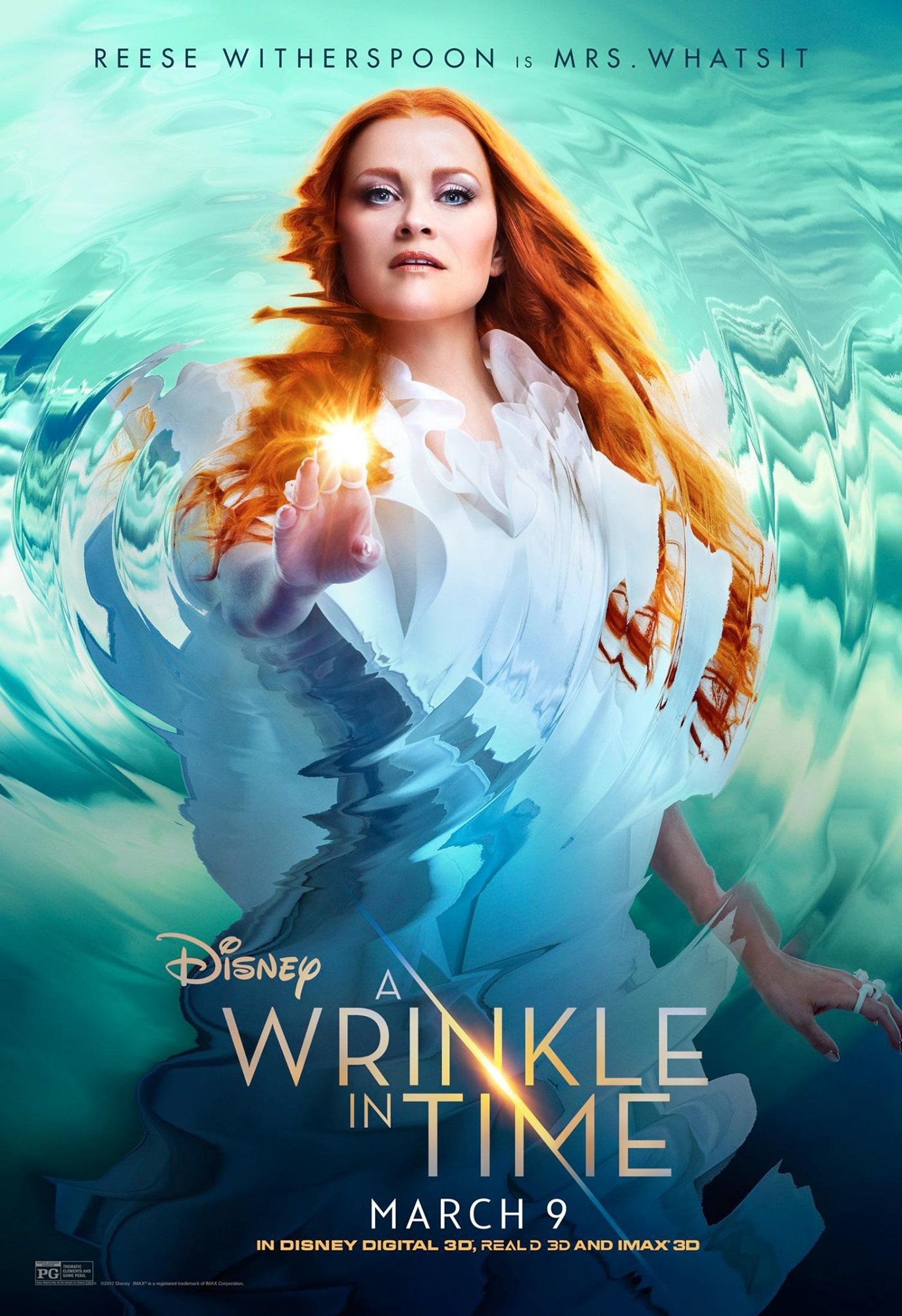 And it gets even worse. This is a still of her from the trailer. 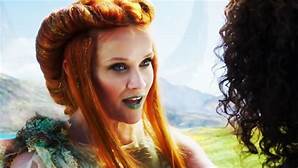 ….. Are we kidding? Is she playing Mrs. Whatsit, the old woman? Or Poison Ivy cosplaying as an elf?

Then there’s “Mrs Which,” who is either Margaret Hamilton, or a shiny ball of light.

Oprah as “Mrs Which”

No, seriously, what the Hell? Why are they dressed for the Halloween Day parade down in Greenwich Village? In fact, I’m relatively certain there are better dressed, perhaps even more tasteful, people down in the Village. Granted, they would be X-rated versions of the costumes, but you’d at least be able to figure out the costumes.
Of course, making things even dumber is what has been done to Mrs. Who. She in particular, tended to talk in quotes — great philosophers, Shakespeare, Dante, Cervantes, Goethe, even the Bible.

As for the henchman that looked like Satan’s understudy… If I look at the cast list correctly (assuming that “The Man with Red Eyes” has been shortened to simply “Red”), our dastardly villain is played by … Michael Pena. That’s right. The comic relief sidekick from Ant-Man. Because sure, he was intimidating.

The trailers (I will not even link to that drivel) are so bright and shiny and bouncy I want to vomit. Sure, Wrinkle never really goes as grimdark as some YA, but it’s nowhere near the bright shiny happy people crap we’ve seen in the trailers.

Oh, and another problem with the trailers …. no Charles. At all. He’s only, oh, THE SECOND CENTRAL CHARACTER. But details! Details! This is Hollywood.

Three of the producers worked on the new Pete’s Dragon … because that worked out so well, no one saw it.  For another, it’s her first gig. The director, Ava DuVernay’s major successes include Selma, some hip-hop shorts, and a Jay-Z project…. At least we know what happened to Mrs. Who.

I have to ask, considering how old, and how well loved A Wrinkle in Time is … who did these people have to sleep with in order for all of these relative amateurs to be allowed within spitting distance this project?

The only real answer I can come up with is with Ava DuVernay, and that is … she was probably the flavor of the month at the time. Given how long it takes to make a movie, she was probably first offered the film fresh off of Selma (2014). She was confirmed to direct in 2016, so 2015 was probably the negotiating period.

Looking through Ava DuVernay’s directorial experience, I’m certain there was a fair amount of politics in this decision. Everything she’s done is either a documentary, or tied in with racial identity politics, or both.

Now, one thing that people familiar with the book and the ads for the new film will note one thing that I’ve left out. The new film makes the Wallace family black instead of Caucasian. Frankly, that looks like the least of the film’s sins. Hell, their Meg at least has glasses, something I thought Hollywood didn’t allow on women unless they were also wearing lab coats at the time.

No, the race swapping is less offensive to me as it is confusing… especially when they’ve made everyone in the family black, except for the missing father, played bizarrely enough by Chris Pine. Because, you know, Chris Pine as a scientist is just so convincing.

Not to mention that if this were any other director, I would probably just say someone in casting saw Chris Pine and said “Sure, why not?” Given the politics of the director, it wouldn’t surprise me if she wanted to slip in an absentee white dude as the father because having an absentee black father would be too on the nose for what I’m sure DuVernay considers “her” audience.

Actually, the more I look at the project, and I hear what they’ve done to certain aspects and characters, the more offended I am by DuVernay’s racism. Yes, racism. Her casting choices are obviously directed towards making the roles racially diverse. Under any other director, I would think that it was their shot at making it more identifiable to a wider range of people. But with DuVernay’s directing history, I’m certain she wants “her” audience to be one specific group.

Also, having Mrs. Who speak in quotes of Jay-Z just feels like talking down to said audience. I’m sorry, but if DuVernay’s casting is obviously trying to get a good percentage of Afromericans to the theaters for this schlock, then why is she dumbing down the material? Is it because she thinks that blacks are too stupid to understand Shakespeare or the Bible? It’s right up there with the Black Panther trailers featuring majority hip hop, yet none of it appearing in the principle soundtrack.

To top it off, DuVernay has STATED OUT LOUD that one of the turning themes of the movie focuses on … Meg’s hair. Yes, that’s right. Her hair. Pardon me while I bang my head against a wall. It will be quicker and less painful, and I suspect that, after a while, I may even come to enjoy it.

Of course, it gets even better. You’ll notice I’ve given no credit to the writers. Because in film, writers are nothing and nobody. The screenplays they write are usually mere suggestions to whatever megalomaniac is put behind the camera. The writers of the screenplay are responsible for, on the one hand Bridge to Terabithia (ugh) and on the other … Frozen and Zootopia. Yay. So you can imagine what the starting screenplay looked like.

So, like with The Chronicles of Narnia, Disney has taken yet another beloved childhood novel, and proceeded to wreck it. I won’t even see it in theaters. You know it’s bad when even the cinematography is making me wary of the project. The casting of the Weird SistersTM is atrocious, character dialogue (if not the casting) is geared towards pandering towards (or just looking down on) a specific section of the general public, and the vibe of every trailer is perfectly tone deaf or atonal to the original novel.

Heh. And people wonder why it bombed.

2 Responses to Ironing out A Wrinkle in time