Imagine, if you will, a Firefly that did not suck… and that it is written by David Weber, before Weber’s world became Game of Starships with 500 characters you can’t remember.

A captain who’ll take any job if there’s enough money in it.

A pilot with an agenda of her own.

And a mechanic with an eye on the pilot.

The crew of the Fives Full are just trying to make enough money to keep themselves in the black while avoiding the attention of a government so paranoid it’s repealed Moore’s Law. They’re not looking for adventure in the stars . . . but they’re not going to back down just because something got in their way.

We cover five missions / stories, but they all build on each other. The opening deals with a bunch of tourists … which turns into a cat and mouse chase among asteroids, a shoot out, and some additional SCIENCE!
Events that take place during #1 lead to the next mission with Terraformers … called “Kitty Chow.” Yes, really. Trust me, you won’t see this coming.

“Kitty Chow” leads to several bits of business in the next arc of stories, with Pilgrims, the Treasure of the Sierra Madre …. IN SPACE … and then Hitchhikers. How do you have hitchhikers in space? Heh heh heh.

There are several interludes that take place in between the missions of the torch ship in question, and they both add to the narrative and provide some exposition. This is important, since there is little in the way of exposition here. There is just enough data here to get you through the story, but nothing else. “The Fusion worlds” are paranoid about technology, because the AIs revolted. Why did the AI revolt? No idea. We don’t need to know. We just need to know that they dislike humans. And we won’t know until book two.

But dang, this was fun. Granted, we don’t have the scene-chewing, over the top characters from Firefly, but we also don’t have their angst. The crew of the Fives Full are … generally well-adjusted individuals. The story doesn’t leave you wanting, but it does leave you with a desire to know more about the world, and what happens next to our heroes. None of these people are perfect. The Captain and the XO are divorced, yet still seem to be together. One of the mates seems to be serially monogamous, and the pilot … is really complicated. None of these people are good Catholics. But it is good SF.

On the one hand, I would say that this is hard SF — our heroes plot courses with slide rules, we have terraforming (right now, it’s mostly done by Israel), AIs, genetic engineering and using elements for fuel. I think the only thing that isn’t merely an extension of current technology is translating through space via various and sundry portals. But Karl Gallagher has planets listed with their gravity well intensity. Who does that? Answer: an MIT grad with an engineering degree.

However, to say that this is hard SF would be terribly mislabeling it. Much of hard SF is so techy, you’d be hard pressed to find character or culture among the people and places. Here? Here, there is something for everybody. There are multiple systems of government, from an auctionocracy (yes, they auction off seats, it’s half the tax income for the year) to representative government, et al. The cultures are clear, and unique, and varied all over the place. It’s a wonderful array of stuff here, and it’s obvious that Karl has put in plenty of time contemplating … everything.

One problem I have with this particular novel: why are they broken up into short stories instead of chapters? It reads continuously. Also, the opening few pages (less than five) are disorienting. They do feed into the story, and any confusion from the opening is resolved by the end, so no worries there. It may make it a little difficult for some people to get into the novel initially. Don’t worry about it, just push through the first five page (okay, more like page 5, 6, and 7) and you’re good.

Is it Superversive? Hell yes. That’s the easy part. Is it Pulpy? Well, that’s according. You see, there’s a romance going on here, a spy story, a thought problem story, with multiple types of adversaries — the ever present man versus nature of hard vacuum, man versus man, man versus self, and man versus society. 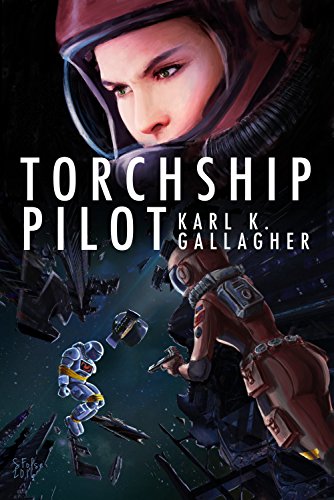 The sequel to Torchship follows our intrepid heroes on a journey through space, and right into a war.

Due to events that happened during Torchship, the Disconnect, the “backwater,” low-tech side of the galaxy has declared war on the Fusion–the high tech, monolithic world that makes 1984 look subtle.

Pilot Michigan Long and her Captain have been hired to do some shady missions for the Disconnect, and everything they did in Torchship have come back to help them … or bite them.

As the description says

WAR IS BAD FOR BUSINESS: The crew of the freighter Fives Full want to enjoy the profits of their dangerous voyage, but when war breaks out they’re pressed into service for missions a warship can’t do. Winning the war demands pilot Michigan Long act ruthlessly . . . and may cost her her conscience and her marriage.

Despite my fears, Torchship Pilot never went into cliche territory — Long never becomes a Captain Ahab knockoff, despite her own worries.  Three characters from the last book have character arcs, even when they’re off screen. Yes, really.

Several questions asked in the previous book are resolved quite handily. There are one or two points where I’m wondering “Why aren’t they just doing X?”
Torchship and Torchship Pilot are really one book. They read continuously, and book 2 takes place only days after book 1. Torchship Pilot, however, is one novel, and is treated as such, instead of a series of tales, as in Torchship. The reason they’re not one book is simple: it would be too dang long.
The science is still rock solid, and it may have gotten better from the first book, which is a cute trick.
Five out of five. Read it.
And then there’s book three:  Torchship Captain. Just when I thought that the series could have ended with book two, Karl found a way to throw a heck of a monkey wrench into the ordeal.

Michigan Long blackmailed her enemies into joining the war against the AIs. Now the secret she used is leaking out and the Fusion is shattering. Caught in the middle of a civil war, she will have to use any weapon that comes to hand—her wits, her ship, her mate.

And that barely scratches what happens in the first hundred pages.

As the Fusion — the high-tech Orwellian world that has locked down technology since the AIs went rogue — falls apart, well, let’s just say I was wondering if this was the end of Firefly or the start of Honor Harrington. I was looking for Robert S Pierre along the way. And with good reason. If you ever wonder what a historian designing society looks like, here you go.

But a complaint I often heard lodged against Honor Harrington is her navy is “too perfect.” If that’s your problem, meet Michigan Long. Long is a Sparrow with Ahab syndrome. This is the book where it looks like it’s gonna cost her. There is a reason no one wants to be the Count of Monte Cristo when they grow up. While it always simmered below the surface in Torchship and Pilot, this is where it, and she, goes full tilt.

One of the major threads in this book is the politics of the competing factions — going from the Fusion Orwellian state of societal manipulation, to the Disconnect Libertarian anarchy, to a new player called “the Harmony,” Confucian principles turned to totalitarian state. The politics of it were all handled deftly and in details without becoming too boring … though it does start to drag around the middle. Someone should probably do a sociology paper on this book.

But as I hinted, there are some problems though. As I noted before, Long is basically a former Sparrow — a spy who uses sex as a primary weapon in her missions. Unfortunately for her … and the reader at points… she’s still using it. And yes, she’s married. And you can guess how just from the description of the novel. The sex scenes are thankfully not explicit, and her husband is Confucian, not Christian, so he’s relatively laid back … but not very happy about it. It’s complicated and messy, and while it fits with the characters, personally I think it went a step too far. There’s a stretch around the middle you will probably want to skim through — between the politics and the Harmony subplot, there’s some drag in the pacing. It seemed a little excessive and slow. I’m not even going to touch on moral / immoral aspects of it. I can’t even say it was padding, since the book is just over 350 pages long. While book 1 and 2 fit together like one long novel, this almost feels a little off at times.

Thankfully, the book rallies quickly by the last third. At the end of the day, this wraps up every dangling thread, leaving it all tied in a bow. Everything is resolved, including elements that lead back to book 1. There was so much Fusion-Harmony politics, I half-suspected that the AI solution would happen off screen. It wasn’t. It was integrated beautifully back into the overall plot. Karl could have easily made this final part a fourth novel, but he tied it off like a surgeon with a suture in a lovely 30 pages of epic warfare that I did not see coming, though I probably should have.

Hell, the only thing I thought Karl would do and didn’t would be with the terraformers. But they already served their purpose in books 1 and 2.

As an aside: Dear David Weber, if you have any problem with continuing or concluding Honor Harrington, I recommend you and Karl have a conversation sometime.

Declan Finn is the author of Honor at Stake, an urban fantasy novel, nominated for Best Horror in the first annual Dragon Awards. He has also written The Pius Trilogy, an attempt to take Dan Brown to the woodshed in his own medium -- soon to be republished by Silver Empire Press. Finn has also written "Codename: Winterborn," an SF espionage thriller, and it's follow-up, "Codename: Winterborn." And "It was Only on Stun!" and "Set To Kill" are murder mysteries at a science fiction convention.
View all posts by Declan Finn →
This entry was posted in Commentary, Fiction, Reviews and tagged Books. Bookmark the permalink.