I just got through with BrickFair VA 2017, which was fun as always. I didn’t have much time to go enjoy other displays, though, so I didn’t get a lot of picture-taking done. The last time I had all the photos I wanted to get was in 2015, and even then I was at the convention until the doors closed at 2am Sunday morning. I was very tired when I came back for the last day only a few hours later!

What’s BrickFair? I described it in my article on why Lego is awesome, but here’s the gist. It’s an art convention built around one medium, namely the same plastic bricks you find in the toy aisle at your local department store. The creativity, ingenuity, artistry, and storytelling capabilities of both that humble brick and the people who build with it are staggering. I’m one of the volunteers who run one of the largest Lego conventions in the world, namely BrickFair Virginia, which just finished its 10th anniversary show yesterday. My section is Castle, which includes medieval and fantasy displays. 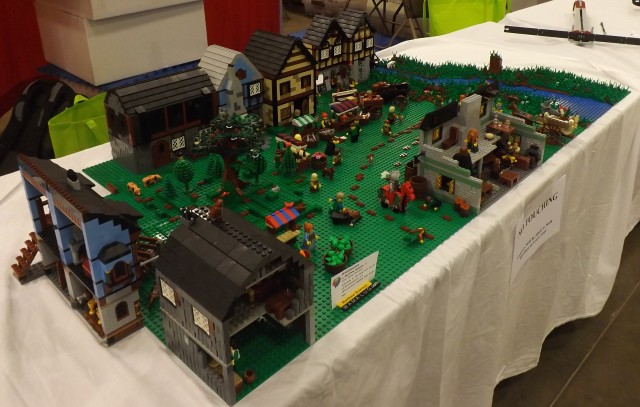 This was my display two years ago, and I put a picture of it in the above-linked article, promising further looks at it in the future as I expanded the display. Well, Catholic Geeks fans, I keep my promises.

This is Brickton in Bricktonshire, a small town in a medieval England that never was. This town has the occasional monster, ghost, assassin, wizard, anachronistic playwright, and time-traveling police box.

This display was a rush. I had pretty much the same thing last year; the only true difference is the terrain. Even that was below what I wanted, and the only reason I got it done in time for the show was through the kind assistance of two young ladies named Annika and Kat. Additional assistance posing minifigures came from Cat, also known as Intern #1 over at Novel Ninja.

But last year was even more of a rush, and I never got detailed photos for the CG audience, so here I am and here you go. In fact, I’ve got video for you (if you don’t mind the occasional autofocus issue). And for all of you who haven’t seen it in person or looked at my Facebook feed, there’s a surprise at the end!

Yes, that last bit is a small detail that took a lot of effort. But someone came along who appreciated it in a rather gratifying manner (and appropriately dressed, as well!).

Rather than subject you to a long article with inane and potentially self-aggrandizing commentary on each and every photo, here’s a slideshow of the display.

Hopefully, next year I’ll be up to what I had planned for this year. I immediately started drawing up a new plan based on ideas I’d had this year as well as problems I’d encountered. Here’s a sneak peek . . . and yes, it’s on the back of an IHOP placemat. Hey, we got peckish after it was all over!

Eventually, I want this display to expand to show the countryside, and actually show the “shire” part of Bricktonshire. My upper limit will likely be based less on cost and more on how long it takes me to construct it at the con, and how much room I have in my car.

I hope you enjoyed that look, and perhaps I’ll have an update or two before BrickFair 2018!

Matthew Bowman is a traditionally-minded Catholic convert and freelance science fiction and fantasy editor, which means that he's in high demand in a small population. Fortunately, he loves talking about stories. And Catholicism. And history. And philosophy. And lots of other stuff.
View all posts by Matthew Bowman →
This entry was posted in Personal Posts and tagged BrickFair, Lego. Bookmark the permalink.