The Epic Conclusion to the Dragon Award Nominated series 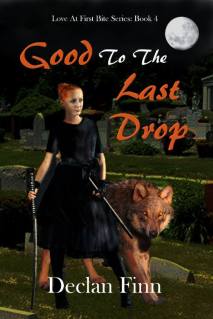 Live and Let Bite is the second book of the Love at First Bite Series to be nominated for a Dragon Award.

Yes, when half of my quartet is nominated for an award, it’s “the award nominated series.”

So what does this Dragon Award nomination mean?

It means business as usual.

Book four, Good to the Last Drop, is almost here.

Yes, it’s the last book. Marco and Amanda are going to have one last ride, and when I say that the armies of darkness are coming for them, I’m not exaggerating.

Of course, you know what it means when it’s the end of a series, don’t you?

That’s right! It’s time to up the body count!

For the Whedon fans out there, let’s just say that it’s time to …. Wash the cast.

The final war is about to begin, in this conclusion to the Dragon Award Nominated series

Merle Kraft, Marco Catalano and Amanda Colt have battled against the mythical Council, a supernatural conspiracy that monsters fear. This war has brought them up against vampires, minions, and demons from Hell.. Along the way, they have accumulated allies among the police, the military, the mafia, college students, lowly street gangs, and even other vampires.

Marco and Amanda have overcome their biggest terror — their passion for each other.

But now, they face the final threat, one that is the culmination of every threat before them. This creature from Hell has powers beyond anything they’ve ever seen before, and has allies of his own: including SpecOps minions, an army of vampires, and packs of werewolves.

And that was before Marco got bit.

This ending is going to be epic.

Declan Finn is the author of Honor at Stake, an urban fantasy novel, nominated for Best Horror in the first annual Dragon Awards. He has also written The Pius Trilogy, an attempt to take Dan Brown to the woodshed in his own medium -- soon to be republished by Silver Empire Press. Finn has also written "Codename: Winterborn," an SF espionage thriller, and it's follow-up, "Codename: Winterborn." And "It was Only on Stun!" and "Set To Kill" are murder mysteries at a science fiction convention.
View all posts by Declan Finn →
This entry was posted in Fiction, Horror, News, Personal Posts, Thriller, Writing and tagged vampire, vampire novel, Vampires, Writing. Bookmark the permalink.