Posted on November 28, 2016 by Declan Finn
For those of you who do not know the strange tale of the good Doctor, Dr. Stephen Strange starts out as a neurosurgeon, but is really Tony Stark with a medical degree. In this case, he’s Benedict Cumberbatch, with an ego greater than Tony Stark could have ever imagined. In short, he’s very much like a real surgeon. When his hands are destroyed, he literally goes to the ends of the earth to fix his hands. He’ll even consider magic. 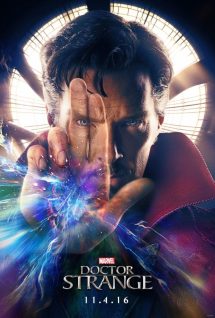 And then he goes down the rabbit hole.

Something I should get out of the way right now: there are no demons here. The “Magic” being used is falling back on Clarke’s Law, that any sufficiently advanced technology is indistinguishable from magic. This “magic” is drawing on powers from alternate dimensions and universes in the “multiverse,” which can be utilized if you study long enough and hard enough. There are no oaths to higher or lower entities, just really intense quadratic equations.
In every Marvel film….and comic book, really… there are dark reflections of the heroes that serve as the enemy. Red Skull is the evil, twisted reflection of a patriot, or evil businessmen versus Tony Stark, that sort of thing.
In this case, the dark reflection on Strange is brought to you by Mads Mikkelsen, who has played every villainous psychopath from Casino Royale to Hannibal Lecter. In this case, Mads’ character, Kaecilius, literally uses some of Strange’s lines. Dark reflection achieved. Kaecilius thinks he’s found the secret to immortality, even though he’s really opening a portal to hell.
For those fans of Dr. Strange, yes, Dormammu appears.
Heh. “Dormammu, I’ve come to bargain.” Heh….Long story.
Normally, one expects a Marvel origin film to follow a specific pattern. One could almost use the color by numbers chart to track the progression from act one to act 2, to act 3. It starts with the inciting incident. In the case of Tony Stark, it is an incident in Afghanistan, getting shrapnel into his chest, forcing him to become Iron Man. In the case of Captain America, it’s “I want to sign up and be a soldier,” and he is given powers. Act 2 typically consists of exploring powers. Or getting the hang of powers. Or, in the case of Captain America, it was being allowed to use his powers.
However, in the case of Dr Stephen Strange, the director stated that he went out of the way to shake up the formula. They have tossed out the graph and the paint by numbers feature of the script writing and have replaced it with somewhat more seamless action. While you do have the standard “Tony Stark as Surgeon” element to the beginning of Strange’s career after act 1 and and his training begins it is somewhat more difficult to see where act 2 and act 3 split. It was almost  seamless.
One of the standout features of this film was the final battle. Instead of destroying a city, it was rebuilt. Instead of closing a portal, we went into it.  And the solution had more of the elements of Iron Man than anything else. Remember how Tony Stark took out Obidiah Stane through a combination of outwitting  him and technological know how? With Dr Strange, it is more a matter of poker. He utilizes the biggest toy in his toolbox and uses it in a way I never saw coming. I figured that we would have had a standard knock down drag out, with fisticuffs between our hero and Mads Mickelson, playing the psycho du jour; however, what we got was a showdown that you would have expected to come at the pinnacle of a trilogy. It should have been the final fight for an epic 3 movie deal. And it was very well executed.
In regards to the Ancient One, being played explicitly by Tilda Swinton, it is an element that is thankfully not over utilized: the mentor. The Ancient One comes on the screen, does the part assigned, and then leaves. While Swinton has a good resonating voice for the part, I would have still preferred that the part have been played by Jackie Chan, especially when we get to the martial arts, where I could clearly see where the stunt double came into play. She served her purpose, and that’s about it.
Baron Mordo is Saruman, or Sinestro —  the best of the bunch who turns into something else.  No, he is not the villain of this piece, but there’s enough of an origin story here to make him one of the best developed villains of the Marvel universe since Loki.
Speaking of Loki, STAY FOR THE CREDITS. Honestly, people were walking out of the theater. A dozen Marvel films have yet to teach them better?
At this point I must take note of the other actor in the movie: the CGI. The special effects in Dr Strange rival anything I believe I have seen on the screen in quite some time. You will note from the various and sundry trailers that they do some wild and woolly things to the landscape, and the scenery in general. Trailers did not even begin to capture exactly how much is on the screen, or how well it was executed. I have never seen anyone with the ability to turn all of New York City into an MC Escher painting and make it look halfway believable or realistic. You ain’t seen nothing yet. There is an Astral projection fight, where a defibrillator comes into play in a way I didn’t see coming. The cloak of levitation has a personality, and they didn’t make it into a faithful dog, or something like that.
And finally, there’s Doctor Strange himself, played relatively flawlessly by everyone’s favorite know it all, Benedict Cumberbatch. He is, for once, NOT playing an invincible, unstoppable badass. He has to build up to badass, but even then, he gets his head handed to him. It’s nice to see him vulnerable for once.
All in all, I think it was one of the better Marvel films. Civil War was awesome, making up for the lackluster Ant-Man. And Doctor Strange did not disappoint.
Anyway, go see it, one way or another.
Meanwhile, if you’re interested in ego-maniacal super geniuses, you can preorder Murphy’s Law of Vampires here. It’s the sequel to my Dragon Award Nominated Novel Honor At Stake. (previously reviewed on this blog)

Declan Finn is the author of Honor at Stake, an urban fantasy novel, nominated for Best Horror in the first annual Dragon Awards. He has also written The Pius Trilogy, an attempt to take Dan Brown to the woodshed in his own medium -- soon to be republished by Silver Empire Press. Finn has also written "Codename: Winterborn," an SF espionage thriller, and it's follow-up, "Codename: Winterborn." And "It was Only on Stun!" and "Set To Kill" are murder mysteries at a science fiction convention.
View all posts by Declan Finn →
This entry was posted in Fiction, Reviews and tagged Doctor Strange, Marvel, Marvel Cinematic Universe, Marvel Comics. Bookmark the permalink.