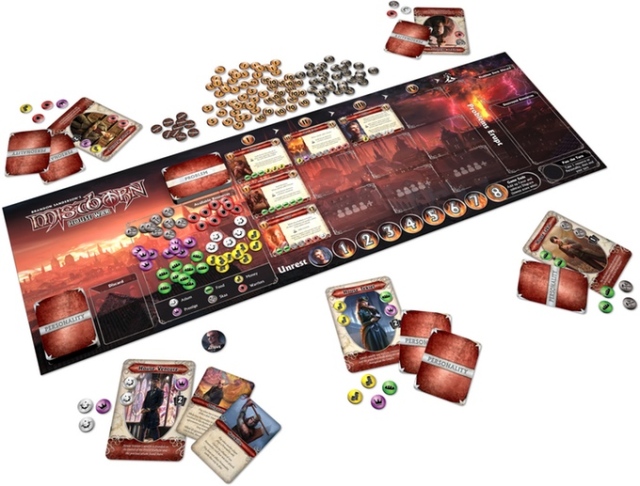 Once upon a time, a mad genius by the name of Brandon Sanderson began penning an epic fantasy trilogy that turned into the literary equivalent of intricate Swiss clockwork: the Mistborn series. It’s a high fantasy series about people who eat metal and use it to do awesome magic stuff, like telekinesis (of metal), Jedi mind-tricking people, super-enhanced senses, and more! Now, a boardgame company is making Mistborn: House War, an intrigue game that puts you in the shoes of the people in power, who run their schemes as the plot of the first book unfolds.

I’ve played a number of intrigue-inspired games at this point, so I’ll be looking at House War largely through the lens of those games: Avalon Hill’s Dune, the old classic Diplomacy, Fantasy Flight’s Game of Thrones, and even Mafia and similar games like The Resistance. They’re all different takes on the same theme, and now House War comes into the fray, because Mistborn might be known for its unique magic system and majestic worldbuilding, but it is just as much a series about plots within plots.

I’m making my review based on the freely-available beta rules that Crafty Games has made public during the Kickstarter: Mistborn: House War Beta Rules. Feel free to download them and read along!

How House War Works
In Mistborn: House War, you take charge of one of the noble houses that hold power in The Final Empire, beneath the watchful gaze of the Lord Ruler. The Final Empire faces many problems–and over time, those problems will increase and worsen. The only way to solve problems is to spend the resources you accumulate during the game, and if you don’t, those problems will blow up in your face. The Lord Ruler doesn’t like it when problems blow up. You will suffer the consequences.

On your turn, you do three main things:

The third step there is the core tension of the game. If you choose to try and solve a problem, that means you’re going to have to get the other players to work together. The problems in the game are balanced so that you won’t be able to solve a problem on your own, unless you just sit back and keep hoarding resources–and that means, of course, that problems keep piling on. Of course, there’s an incentive to try and solve problems, too: solving problems grants you the favor of the Lord Ruler. Favor is, essentially, “victory points”.

Here’s where the meat of the game kicks in. When you trigger the “solve a problem” part of the game, everything suddenly turns into a negotiation, because that problem needs resources to solve, and you probably don’t have all the necessary resources. You’ll choose who gets to participate in that negotiation, and then everyone can make offers. You can offer pretty much anything within the game, although the most basic deal is “I’ll contribute resources if I get some of that Favor from solving the problem.” The Negotiation of Mistborn: House War
Many intrigue games I’ve seen pit the players directly against one another: you’re all scheming for leverage to defeat one another. In Dune, for example, you’re deploying military forces against one another, while holding on to traitors in your opponents’ armies, deciding who you want to make an enemy of, and how you can quickly seize victory. In Diplomacy, you’re coordinating strategies with allies who may or may not cooperate, but you’re still doing it to conquer your opponents. In House War, the players are ostensibly cooperating. It’s very similar to cooperative games like Pandemic, but this time, you get to set a price on your cooperation. The winner of the game winds up being the player who most effectively charges the others for their cooperation.

This sets it apart from other intrigue games, where the winner of the game is the one who convinces everyone else that they should make enemies of the other players, and not them. Of course, there’s also another catch in House War: if the Empire collapses because one too many problems went unsolved, the player with the lowest score wins (because you weren’t in the Lord Ruler’s back pocket, you do better in the world after the Empire’s collapse). Not only does this introduce an interesting non-cooperative element, but it also gives a low-scoring player the chance to come from behind by playing as a spoiler to the others. I haven’t played the game, so I can’t tell whether this is a viable strategy from the get-go, though.

It’s the sort of game that I’d really like to see more of, because I feel that it most strongly captures the actual nature of intrigue. Most people think of intrigue as “I’m going to set up assassins to kill this dude and set things up to depose that duke so I can seize power!”, but a lot of it is “I’m going to get other people to do what I’m supposed to be doing, and I get credit because I set it up”. Intrigue isn’t just about blood enemies that you want to utterly destroy; it’s also about your allies, whom you have no real love for, but who you can’t live without. That’s a lovely sort of narrative tension which infuses this game. 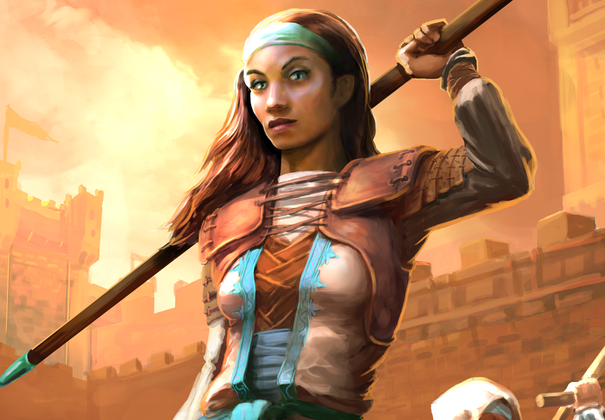 The World of Mistborn: House War
Naturally, many of you are probably curious about how the game handles the story side of things. Mistborn takes place in a deep, detailed world with a thought-out cosmology and society, after all. Unfortunately, the positioning of the game doesn’t quite lend itself to exploring the same grounds as the game: because you’re house nobles, plotting and scheming, the game doesn’t touch much on the adventures of Kelsier & Company. Kelsier does appear (as a token that represents the growing unrest of the populace), and Vin’s arrival is the Problem which signals the end of the game, but otherwise you’re exploring a side of the story that hasn’t been seen very much before.

In one sense, you’re playing as the “bad guys”, which some folks may find disappointing. That said, I think it’s a great opportunity for the game to explore new ground, and they’ve already gotten some interesting writeups in Kickstarter updates for some of the houses (based on houses mentioned briefly in the books) that they’re including in the game. You can also recruit different types of Allomancers to your house (in the form of Personality Cards with special abilities), and there’s even an Atium resource (which is quite powerful, as it should be).

What really fits, however, is the feel of the game. You’re all noble houses who know the harsh truth of The Final Empire: it’s filled with problems and threats, and you’re the only ones standing between it and destruction. Yet, at the same time, there’s no selfless acts between the houses in this game, because there can only be one winner. It’s a clever way to let us play through a different side of the story. It’s certainly something I’m intrigued to find out more about!

If you’re also interested in Mistborn: House War, its Kickstarter runs until July 20th, and it’ll likely go on sale to the general public in a few months or so.

This entry was posted in Board Games, Gaming, Reviews. Bookmark the permalink.