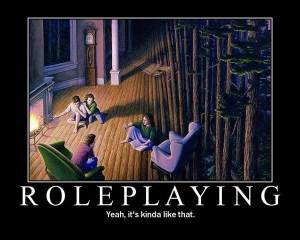 I’ve had a storytelling bug for a long time, and I’ve been running RPGs for well over a decade now. I love this form of storycraft, where players narrate the actions of various characters in response to a plot crafted by a designated leader (known as the game master, or GM), a plot that changes in turn based on the decisions of the players, and all using dice and a set of rules to form a standard and yet somewhat unpredictable frame of reference. No one knows exactly where things are going to end up. That’s part of the fun.

I’ve been developing my own RPG system for the last several years, based heavily on the open-source Fate System. Another four CG authors are in a test campaign that we run on Friday nights over webcams. It’s high time we told you a bit about it.

My foray into gaming started by reading the Forgotten Realms novels (back when they were good), followed by joining the online forum Candlekeep (back when it was good), and then learning the game rules almost out of self-defense (trying to decipher what the other forum members were talking about). I joined a PBEM game (Play-By-E-Mail) until I went to Christendom, where I found my first live-action game. I soon found myself drafted to run the next campaign, and aside from one semester’s break I was the go-to GM on campus.

I kept at it after graduation, and eventually tried out the Fate RPG in the form of The Dresden Files Roleplaying Game. I adapted the rules for use in a Forgotten Realms game, and though it took a little fiddling the results were great. There was just one little problem. The system was so abstract that most of my players had trouble grasping the finer nuances.

I kept tweaking things with houserules, trying to address the issue. Mostly it was a translation problem, where a lot of players are used to a hard-and-fast rule system that’s independent of the storytelling side of things, rather than a system that is directly shaped by, and shapes in turn, that same story. Sometimes just changing a term here and there was all that was needed, rather than messing with the underlying mechanics.

A little under a year into this campaign, Evil Hat 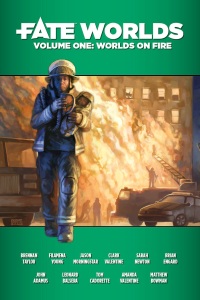 Productions (the publisher of the Fate RPG) announced Fate Core, a complete revamp of the gaming system. That helped a lot, as it clarified a lot of the issues in question. It also provided a nice freelance opportunity for me. Yes, that is my name on the cover of Worlds on Fire. I was just the editor on one of the settings it described, but it remains the only time my name has ever appeared on a cover, and I didn’t even know my name was there until Andy pointed it out to me. Never let it be said that Evil Hat lives up to their name.

Fate Core is a really good system, and as I said it cleared up many of the issues my players had. But it didn’t clear up everything, and there were still several issues for people used to more concrete systems like Dungeons & Dragons. However, there was one very nice feature: in addition to providing the source book free of charge (yes, you can get a PDF of Fate Core for whatever you want to pay, including zero), they opened up the rules as open-source. You don’t even need to pay a licensing fee.

Suddenly, my houserule tweaks had the opportunity to be something I could publish.

I’ve been developing and refining the system ever since, on and off, with the hope of getting it ready for publication. It’s gone on the back burner several times, and even now it’s not a huge priority, but when I was between gaming groups I went back and revamped everything from the ground up. Fundamentally, the game is still Fate; but cosmetically, it’s very different.

The major part of a Fate game is the aspect system. In many RPGs, the core mechanic is usually described as “Roll a die/set of dice, add a modifier, and compare it to a target number.” Fate’s got that, but description matters as much as, if not more than, what you roll on the dice. These descriptions are represented by aspects, a word or short phrase that describes something special. You don’t bother with anything obvious, like “This {Sword} is {Sharp}”; this is for narration, and more appropriate for something like “Because I was {Trained by the Emperor’s Swordmaster}, I can . . .” or “I’m going to roll Athletics to {Get Behind Him}.” (Note: in Fate Core, aspect names are usually bolded, but I and my players identify them with brackets.) 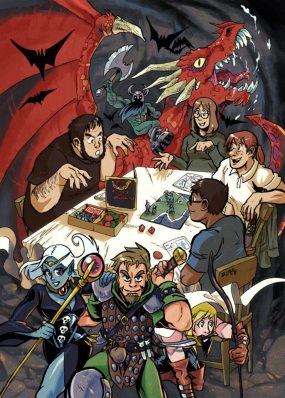 Without going into details on the system, you gain benefits from description by altering or discovering things, which translates into a set of options that can be used to further change the story or add a benefit to a die roll. It’s a system designed less for people who memorize rulebooks and more for people who react to boredom by dreaming up stories.

Now, as I said, that makes things fairly abstract; but the truly difficult things for my previous group were actually the damage, advancement, and magic rules. Each of those got slimmed down (though actually, Fate Core doesn’t have a standard magic system, and fans are continually coming up with different options for that anyway; but I’m comparing it to The Dresden Files RPG), and now my version uses more familiar terms like XP and hit points, and the magic system rules are defined on one page.

No, really. One page. Granted, that’s one page in Word, but that wouldn’t be more than two pages printed out with a little artwork in the final product. Compare that to . . . well, almost any other system. Playing a spellslinging wizard in this system takes only a very small bit of extra effort compared to a fighter. As long as you grasp the basic rules, you can jump right in with a wizard.

I’m developing two campaign settings to go along with these rules (and no, I don’t know when they’ll be released for beta testing or publication). One is Europe in the late 16th century where magic exists, England remained Catholic, France became Protestant, and Spain is out to create a new Roman Empire centered on Madrid. The other is set in a high fantasy world with elves, dwarves, and other playable races, with a more Victorian/steampunk cultural era in the aftermath of a . . . well. Actually, that hasn’t been decided yet.

No, it’s not because I don’t have any ideas. It’s because that setting is the subject of the weekly game I play with Lori, Olivia, Ashe, and Ross, as well as three other players who aren’t writing for CG: Christine, Jason, and Dan. (Yes, I have seven players. No, there are no openings, and even if there were there’s a waiting list.) The campaign is called Strange Skies, and the result of the game will define what the published setting will look like.

But that doesn’t mean you won’t get to find out some of it before then. Notice that the title of this post is not “Matthew Bowman talks about his game system that he’s nowhere close to publishing yet.” No, it’s “Strange Skies: An Introduction.” We’re going to be sharing some of what happens in this game. Honestly, with five of us playing, why wouldn’t we share? It’s too good a tale to pass up.

We’re currently five chapters into the story, and tomorrow night is our eighteenth session. That means we’ll have a bit of work to catch up. But that just means you’ve got something to look forward to, right?

I hope you’ll enjoy it as much as we are. Stay tuned for tales of the crew of the skyship Fortuna as they foment revolution in a corrupt empire!

Matthew Bowman is a traditionally-minded Catholic convert and freelance science fiction and fantasy editor, which means that he's in high demand in a small population. Fortunately, he loves talking about stories. And Catholicism. And history. And philosophy. And lots of other stuff.
View all posts by Matthew Bowman →
This entry was posted in Gaming, Personal Posts, Tabletop RPGs and tagged Fate Core, Fate RPG, Role Playing Game, RPG, Strange Skies. Bookmark the permalink.

3 Responses to Strange Skies: An Introduction