A Zombie Game With Brains: The Walking Dead, Season 1

You’ve probably heard of the popular TV show The Walking Dead. You know, the one that actually made it cool to watch TV about zombies. You might even know about the original comics that the show was based on. This blog post isn’t about either of those, however: it’s about the official computer game that brings in a story tandem to the story of the show/comics. It’s a combination of “interactive movie” and classic adventure game that places its emphasis heavily on the narrative and storytelling. So how’s that shake out?

Note: this is a spoiler-free review that covers “Season 1” of the game, which is sold in five-episode seasons. Season 1, Season 2, and a spinoff featuring the show/comics character Michonne are currently released, with Season 3 coming in the indeterminate future.

The Many Facets of the Game
Interestingly, this game draws on a number of disparate game genres in order to create its experience. This might sound like an awkward amalgam, and it’s not perfectly smooth, but it largely works because Telltale Games (the company that makes the Walking Dead game) knows what it’s doing, and is very intentional with how it uses different parts of the puzzle.

Adventure Games: this genre is one you might know because of Sierra Games, or even some of the Lucasarts adventures. Going back further, maybe you played older text-based adventure games. Either way, the concept is the same: you walk around the world, gathering various items and then trying to figure out how to use items in different parts of the game in order to advance the story. Maybe you need to collect a gold-plated comb in one room in order to unlock a secret compartment at the bottom of a drawer in a mansion that you’re investigating, for example. You complete the game by exploring, figuring out how to correctly use items, and advancing that way. In The Walking Dead, there’s segments like this, where you’ll have to do something like find batteries for a radio, or figure out how you’re going to cut loose a tanker that’s blocking your path. The puzzles tend to be a bit complex, but not too terribly difficult, and you eventually work out what you need to do, with a little bit of poking-around.

Visual Novels: this genre (which originated in Japan, and unfortunately is largely comprised of the interactive equivalent of trashy/pornographic romance novels) focuses heavily on dialogue, which makes it a close cousin to Bioware’s games in some regards. (I’d actually be curious to see if Bioware took inspiration from visual novels.) Gameplay consists of reading dialogue between characters, sometimes choosing between multiple dialogue options for the main character. What you wind up saying can change the course of events, or the relationships between characters, or both. In The Walking Dead, you make a huge amount of dialogue choices for the main character, and although many of them don’t impact the plot directly, they definitely impact the immediate moment!

Cinematic Games: there aren’t many games in this genre, but it was started by games like Indigo Prophecy, Heavy Rain, and Until Dawn. It’s heavily narrative, featuring a lot of cutscenes and focusing on your character’s interaction with their world. Cinematic games are designed to be immersive, sometimes featuring Quick Time Events (periods of the game where you have to press keys in a specific sequence in order to continue) in an attempt to deepen immersion. This is what the core of The Walking Dead most resembles: it’s about inhabiting a character in a world, and it’s about drawing you into that world. 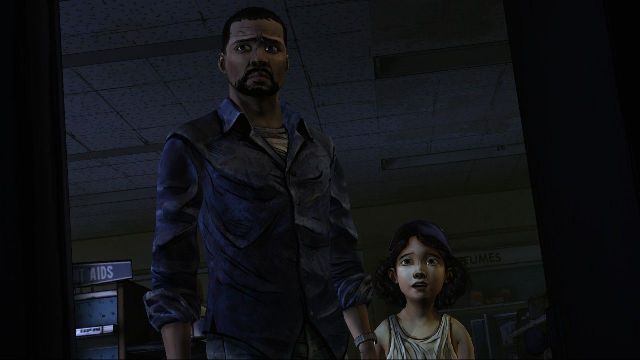 Drawing You In
If there’s one thing that The Walking Dead does absolutely right, it’s when the game draws you into the world and the narrative. It does that by synthesizing different elements from the genres I listed above, using a lot of interactive tricks to make you feel connected with the story. In some ways, it winds up being far more visceral, a far more intimate connection with the story, than when you’re watching it unfold in a movie, or even when you’re reading it in a book. It winds up being so good because it actually uses interactivity as a means of building a stronger story, which is something that can be incredibly rare in the gaming world.

First of all, the game lets you interact with the world. Most of your time in the game doesn’t really have any time pressure attached, and you can walk around locations and explore them, choosing to interact with different objects there. Lee, the main character, will usually offer some sort of comment on the object, and if it’s something potentially useful for a puzzle, you’ll add it to your inventory. Each object you examine has a little snippet of narrative attached to it, and since you have to explore the locations anyway (in order to find the way forward), you wind up internalizing the world through these small, intimate details. There’s also times when you wind up interacting with a very straightforward thing, like the zombie that needs to be chopped down. That’s when the game puts control in your hands, sticks a hotspot right where you need to click, and then makes you do the dirty work. It’s gross-feeling, visceral, often horrifying, and effective.

Sometimes, things get more tense, and that’s when you have to start using the interface under pressure. Sometimes, you’ll have to mash buttons in order to save the main character from a dreadful fate. It’s usually the same–mash the “Q” button quickly, and then once you’ve mashed it enough, you switch to hitting “E” for a final push. It gets used in tense situations, like when zombies are pushing against a door that you need to barricade. You’ll also need to use the regular mouse cursor to perform actions that ought to be easy (you shoot/punch/kick zombies simply by clicking the indicated spot on the screen), but since the controls are a little wobbly-feeling, and the time pressure is on, you wind up getting a pretty accurate simulation of being in a high-stress situation with big stakes. It’s less gimmicky than other Quick Time Event systems, and the simplicity makes it more impactful.

Then, there’s the dialogue. Every conversation that Lee participates in usually requires him to make five or six different dialogue choices. While the conversation often still proceeds as normal, making those choices lets you have a bit of a voice. At the same time, your choices are still restricted, because Lee isn’t a blank avatar but rather his own character. Looking at the range of his possible responses not only helps you understand Lee’s character, but it helps you define Lee’s character in small ways. Each conversation choice has to be made within a given time limit (and remaining silent is also an option!), which puts the pressure on. I’ve messed up and not chosen what I wanted to, because the clock was ticking at an unusually fast pace–this sort of effect helps to make tense arguments feel very tense, and firing off the wrong thing in the heat of the moment is something that happens very easily! 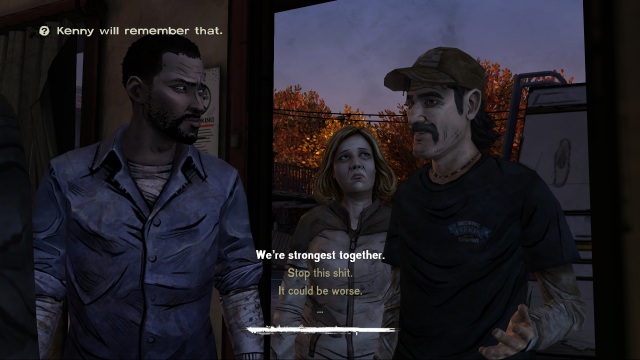 The Heart of The Walking Dead
Of course, The Walking Dead is only as good as the characters who inhabit it. No narrative tricks can save a story that doesn’t have people at its heart. In the case of The Walking Dead, not only is there a full ensemble cast of complex, incredibly human souls, but there’s one particular relationship that forms the core of the story: the connection between the protagonist Lee and the young girl Clementine.

When the story opens, Lee is being transported to prison…on Day Zero of the zombie outbreak. After everything predictably goes sideways, he soon meets Clementine, who is scared, alone, in hiding, and wanting to reunite with her parents. Lee takes her under his wing, acting almost like a father figure, although a lot of the characterization of their bond is up to the dialogue choices you make. You can even have Lee distance himself from Clementine through dialogue, but c’mon. How could you?

This relationship winds up defining most of the game, as Lee and Clementine work together to survive. The biggest running theme of the game is how Lee’s decisions impact the growth of Clementine, because she’s a lot less formed than he is, and she learns and adapts to the new world quickly. That in itself lends a weight to your choices that would be hard to accomplish if it was just Lee who was facing the consequences of his actions. As you do what you can to protect Clementine from the physical and psychological horrors of the zombie apocalypse (and sometimes you don’t always totally succeed!), and as other people question your choices and actions, you can see her grow and change, and it impresses the reality and the impact of what you’re doing.

Ultimately, this is what makes the game worth it. It’s a slam-dunk when it comes to creating people that you can care about, and when the story lets its blows hit, they connect hard. It’s not as plot-heavy as other stories (which might be for the best, since replaying it makes the low number of actual choices stand out considerably), but it makes up for all of that by leveraging the characters. You get development, character setups, and powerful payoffs by the end: the conclusion to the penultimate “Episode” of Season 1 is absolutely gut-wrenching because of how it throws the entire band of survivors (all of whom you’ve suffered with) into a terrifying situation that’s fraught with finality. 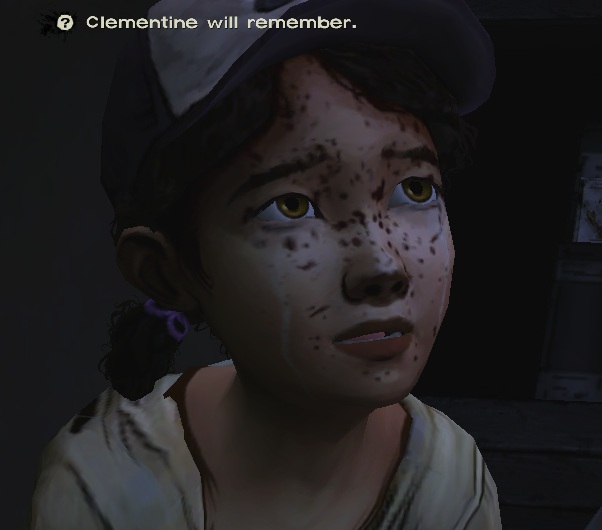 Should I Get This Game?
If you care about stories, good characters, and either like (or don’t mind) zombie stories, do yourself a favor and gun for it. It’s a game that has story at its heart, and it reaches that point by breaking characters down to the bone so that it can build them back up.

You can find places to purchase the game here at the official website.

Content Advisory: blood, gore, physical violence, harsh language, and profanity are all found frequently in the game, albeit they never feel trivialized but are given the proper gravity

This entry was posted in Gaming, Reviews, Video Games and tagged Interactive, Storytelling, The Walking Dead. Bookmark the permalink.

1 Response to A Zombie Game With Brains: The Walking Dead, Season 1