The Force of Star Wars’ Legacy 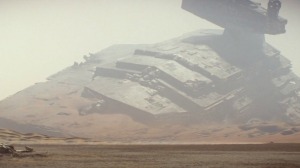 Star Wars is a cultural icon, a film with a history spanning decades across the world. Not only did it inspire countless people to explore the world of science fiction, but it also turned into a bedrock for Hollywood screenwriting. It was an unexpected (if sometimes cheesy) sci-fi romp of a scale that was far greater than many of the films of its time, and it’s made a mark in the history books for sure. And now there’s a sequel trilogy coming out in theaters.

Spoilers follow, because this is not a review of The Force Awakens. Instead, I’m going to be talking about a particular aspect of the new Star Wars: the presence of legacy throughout the film.

The Legacy of Detail

So how does the successor to a long-standing franchise start to pay homage to it? The most obvious and ubiquitous answer for any remake is details: the more, the merrier. Why are details important, though? It’s because the small things are what really show that you care about something, and seeing someone else portraying those details does a few things. First, it acts as a sort of proof: yes, these people care enough about the franchise to include all these little details. Second, it resonates with hardcore fans: they’re so familiar with the franchise that they recognize these little nods immediately, and appreciate them. Third, it evokes the original in little ways: every small callout reminds you of the movies you knew and loved back when you first saw them.

For The Force Awakens, there’s a lot of little details that get pulled out from the prior movies. When Finn gets to be the gunner in the Millennium Falcon, as BB-8 careens about in the loss of gravity, it’s a direct throwback that puts us right in the middle of the Falcon chase from A New Hope. When we see Poe and Fin escaping in the TIE Fighter, Finn gets to use a digital aiming HUD that’s straight out of the films. Han Solo talks about wanting to toss Captain Phasma down a garbage chute to a trash compactor. And in an immensely impressive piece of work, the special effects team <a href=”http://www.wired.com/2016/01/force-awakens-holochess-process/”>painstakingly recreated the Dejarik game from A New Hope</a>, even picking it up right where it left off, using stop-motion to replicate the movement from the first movie.

But there’s another cool thing that the details let filmmakers do: they get to play with your expectations and use those callbacks to shape how you see the current events. Here’s one really obvious example: when Kylo Ren hears about the Stormtroopers’ failure to locate BB-8 and the secret map to Luke, everyone who’s seen the previous movies is expecting a classic Vader-style Force Choke, because of the image that we’ve been shown of Kylo. Instead, we get a lightsaber-wielding tantrum, which subverts our expectations in a shocking way, telling us that Kylo is really nothing like Vader. Or, when you hear Finn and Rey discussing which ship to take off of Jakku, and she dismisses one as “garbage”, it sets the stage for a visual punchline when the camera pans over to reveal that she was talking about the Millennium Falcon.

As with anything, details can’t be the core of a story, but they’re necessary to make something enjoyable, strong, and textured.

The Legacy of Theme

I’ve heard Star Wars described as a “ring plot”, where certain narrative elements repeat themselves in a cycle, with The Force Awakens starting a new cycle. And I think it’s very true that, on a metatextual level, there are a lot of strong parallels that can get drawn between elements in the old trilogy and the new films. It’s those parallels that can also get used in the same ways that I mentioned using details above: they create familiarity, foster goodwill, and let the filmmakers play off of your expectations.

An obvious set of parallels is between Anakin Skywalker, Luke Skywalker, and Rey (who isn’t a Skywalker as far as we know, but she could be!). They’re parentless kids (although Anakin did have a mother, his father is nowhere to be seen, and his mother exits stage left pretty quickly) from desert planets with remarkable Force aptitude. Anakin and Luke, after receiving Jedi training, went on to become cornerstones of history in their respective eras, and Anakin’s legacy of corruption became the focus of Luke’s story, as Luke ultimately redeemed him. This tells us a lot about the upcoming films: Rey is certainly destined to carry the legacy forward, shouldering whatever legacy Luke left and learning from the things that her predecessors give her.

Of course, legacy itself is a more explicit part of The Force Awakens, too. Kylo Ren’s entire character arc is dead-center focused on Darth Vader’s legacy–or, rather, the shadow that Darth Vader left, despite Anakin’s repentance. Not only is Kylo visually designed to look like a new version of Vader, but so is the empire of the First Order, a remix of the Empire. Kylo is surrounded by secondhand versions of Darth Vader’s legacy, and that’s what his story is about: trying to live up to a shadow. It’s even directly symbolized by his shrine to the burnt remains of Vader’s helmet–a hollow, crumbling shell with no substance. It’s a brilliant touch that serves as a running motif for the villains.

The Dark Side of Legacy

But it doesn’t always go right. Sometimes, you can go overboard with legacy. The biggest complaint leveled at The Force Awakens was the charge of copy-pasting. And they’re not wrong. Not only is the film immensely similar to A New Hope, it lifts plot elements directly. Here’s a quick synopsis of the films…

Facing a raid by the Empire/First Order, a plucky Rebellion/Resistance fighter conceals the secret data in an astromech droid, sending it to safety while they themselves are captured and prepared for interrogation by the helmet-wearing Sith Lord.

The droid makes its way to a scrapper on a desert planet, who winds up escaping off-planet in the Millennium Falcon with Han Solo and Chewbacca. (Interesting side note here: in A New Hope, there’s a cantina visit before this point, while in The Force Awakens, the cantina visit happens immediately after. And while the Empire destroys a planet before the cantina visit in A New Hope, the First Order destroys a solar system after the cantina visit in The Force Awakens.) They make their way to the rebel base, where it’s revealed that the Empire/First Order is preparing to obliterate them with a planet-destroying superlaser weapon.

The rebels get together, and form a plan to destroy the superweapon. Aided by the Millennium Falcon and a squad of X-Wings, they make a run on an exposed exhaust vent, and cause the superweapon to implode. There’s a celebration.

Soon after, the desert planet scrapper goes off to a watery planet to train as a Jedi under the tutelage of an old Jedi Master…

Now, I’ll be fair: The Force Awakens actually resequences a lot of stuff. For example, while the Obi-Wan/Vader fight in the Original Trilogy happens very early in the film, the Han Solo/Kylo Ren confrontation (Han is a pretty strong parallel to Obi-Wan, as the old, rugged mentor-veteran) is at the climax of The Force Awakens. But there’s definitely points where the film doesn’t lean heavily enough on its own merits, and those weaken the story. (Another giant planet-killing superlaser? How many of those do we need?) It’s a bit of a warning to storytellers: while using legacy is fine, cannibalizing earlier plot elements can water down your film in unfortunate ways, making it too much of a shadow of its legacy.

Carrying Out the Legacy

So what’s next? I’m eager to see what Episode VIII has, because now that they’ve laid the groundwork for a Star Wars revival, it’s time to see what happens to the series as it matures. There’s a lot of potential for this next episode to be a dramatic rebirth of the franchise, striking out into new ground. If the filmmakers to come can give the new films a strength and voice of their own, while still echoing the prior movies, then the legacy of Star Wars will stand out as its hallmark achievement in cinema.