Review: Brand of the Warlock by Robert Kroese

Posted on January 16, 2020 by Declan Finn
Review: Robert Kroese, Brand of the Warlock
Book 1 of The Counterfeit Sorcerer

A hooded man, his face marred by a mysterious black brand, walks the Plain of Savlos. Some say he has the power to summon demons. Others say he is the only one who can vanquish them. His name is Konrad, and he has a secret….

Once an ordinary soldier, his life was forever changed by a fateful meeting with a dying sorcerer. Now he is all that stands between civilization and the creeping evil of the shadow world. The Brand of the Warlock is the first book in the fast-paced sword & sorcery series THE COUNTERFEIT SORCERER.

Pick up The Brand of the Warlock and start your adventure today!

Robert Kroese seems to specialize in characters who are cynical, capable, and that may just be too smart for their own good. His character of Rex Nihilo is a good example (okay, in the case, there’s also the additional elements of “He’s so smart he’s stupid” and he’s totally insane).

Now we have Konrad. Poor Konrad. All he wants to do is be wealthy and respectable enough to marry the girl next door – who is kind, intelligent, and about four levels about his station.  His plan was to join the army, find honor, glory and rank, come back home and live happily ever after.  His military stuff is… very military.

“The officer who had developed the idea for the Corps had been reassigned to the southern frontier, and another officer, who was nearing retirement and had no interest in the program, had been assigned to run it until a better choice could be found.”

Followed by a description of the Scouts as

“the effectiveness of the Corps was largely due to our chaotic method of operating.” 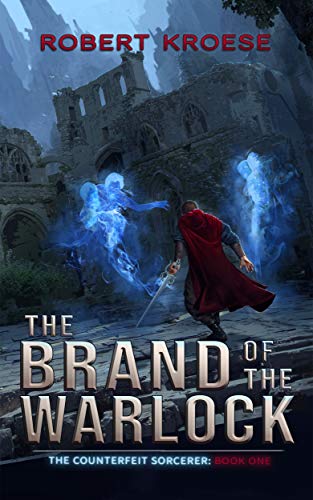 Which is very JSOC.

Then when Konrad tries to stop a fugitive fleeing hot pursuit, with his lady love as a hostage, things go sideways for everybody. The fugitive is a warlock, and has transferred his brand to Konrad’s face. He is tried and convicted – and instead of being thrown into Chateau d’if, he’s thrown under it. As salt is a traditional ward against magic, the only fit prison for a warlock is … a salt mine. With minimal lighting.

Once he is released from prison, we’re off to the races. Konrad has only one mission – to make certain that the girl next door survived the encounter with the fugitive who stole years of his life.

To be honest, there are many elements here that belong in a traditional novel. Or as my family calls them, a Novel novel – classical literature. Our hero has one goal in mind, and a lot of other things happens to him along the way. Superficially, it almost looks like there’s no plot, merely one damn thing after another. However, I can assure you that this is not the case. Eventually, everything ties together. And I do mean everything. Even one or two random encounters turn out to be important. And I suspect that at least one random encounter from this book will come back to bite Konrad in book 2.

On the one hand, it feels very much like a “BOOK ONE,” or a pilot episode of the series. The best example of this feeling comes from the very first Hugh Jackman X-Men movie. It doesn’t really feel like a complete story, just act one.

One the other hand, it sets up everything quite well. A good chunk of the book is dedicated to avoiding a deus ex machina moment at the end. Trust me, you’ll know it when you see it.

All in all, Rob has written yet another fun, readable world. Minimum four out of five. I’ll grant him a five out of five, subject to being revisited upon reading the other novels in the series.

And if you liked the review, feel free to buy me a coffee.