Posted on October 31, 2018 by Declan Finn
I’ve been following Adam Lane Smith on Twitter for a while now. A few months ago, he asked me to look over his (first) novel of Making Peace. The review was held off due to the fact that my Kindle died.
But, now that one of my wedding gifts was a Kindle Fire, I’m now back up and running again.
So, Making Peace …

Interstellar romance author Belkan Candor has had a string of bestsellers, and his latest hit, My Mech, My Love, is flying off store shelves. When he takes a job as an embedded journalist with a peacekeeping organization, he expects a plush assignment with a big payout. What he gets is an exposé into human trauma and psychological pain, and a twisted conspiracy on an entire planet looking to stay off the grid.
Swords are swinging and magic is flinging, and Belkan is right in the center of it. Assassins, serial killers, prostitutes, and obsessed romance novel fans collide in a web of intrigue and violence which threatens to tear his world apart.
Will he survive, or will this novel be the death of him? 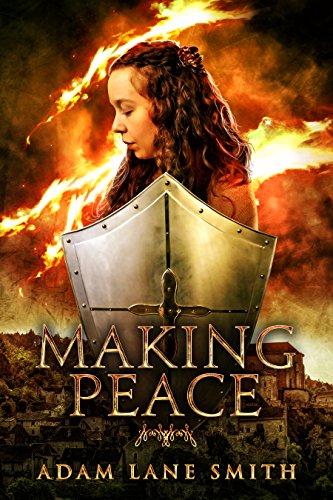 Here’s the short version: This is the best epic fantasy novel I’ve read in years. It’s even better than Correia’s Son of the Black Sword.

Hell, it starts with a flipping memo, and it isn’t boring. Which is an achievement all by itself. Then again, the memo has a fun bit of meta-humans. (“I noted that bit in the waiver you had me sign: death by, among other things, giant lizards? This book had better make enough to settle all my debts”)

Our hero, Mr Candor (really, Mister Smith? Really?) is essentially sent to serve in a less friendly Ankh-Morpork, only played less for laughs. (Or just shown from street level, which is fairly messy to start with). Only a war between the noble houses is brewing and the peacekeepers are the only ones who can nip it in the bud before there’s riots and blood in the street ….

If you’re also a fan of Terry Pratchett, you might think of this as Thud!, as told from the perspective of the city accountant who is sent to audit the Watch, only to be drafted into the front lines of the riot squad.

And yes, I’m comparing Smith to Sir Terry. If you have a problem with that, then buy the book, read it, and tell me where I’m wrong.

But, yeah, this was awesome, from start to finish. I wish I had been writing this well for my first published novel.

Overall, the characters carried this one for the most part. And there’s a nice solid formula for character exposition — because our narrator is an embedded, so of course he can interview each character for in-depth pieces. That formula isn’t even that formulaic, because there’s an issue while trying to interview the team barbarian, but what else can you expect from barbarians? We still get the character exposition in a genuine and organic manner — while being held at knife point.

And yes, I will admit, there are elements that are formulaic and simple, but it’s a helpful for the readers as they track the six characters we open with, before Smith goes into the depth of each character. And yes, each character has depth. Hell. even the character development and evolution was subtle and so gently sloping that you don’t really notice it happening until it’s already happened — and yes, it was happening the entire time.

You could say that this is a very simple fantasy story, but that’s only if you’re not paying attention.

I spent a lot of Making Peace appreciating this from a technical perspective. “Gee, cute, I can track most character attributes through the names” — which were Shield, Ugly, Candor and Vapor (the water nano-mage who’s part cyborg and part Raven from Teen Titans). It was basically an RPG party– barbarian, healer, mage, rogue, bard — which will make the PulpRev crowd happy (I’d note more, but I the closest I’ve ever come to D&D is Order of the Stick). But this was both highly entertaining as well as technically sweet.

Smith also does a nice does of genre-blending. Mages come from nanite enhancements. We have magic and Valkyries, but three of our characters are from off planet. We have an odd sort of coming of age story, a thriller, at least one romance and total war. He’s got political intrigue that easily outdoes George Rape Rape Martin, a story and setting that would make Terry Pratchett happy, and just enough philosophical depth that would entertain John C Wright or Tim Powers (certainly more deep than Neil Gaiman, who is about as deep as a dinner plate in comparison to Smith).

Frankly, my only problem with the book is that chapter 2 is almost pure data dump. Going from chapter 1, which is a fight in an alley, where he’s been wounded, to the data dump of chapter 2 is a moment of whiplash. But even that is well-balanced within the story, due to the narrator serving as an embedded reporter. But honestly, it’s not how I would have done it. I skimmed and skipped most of the chapter, and didn’t even notice.

So yes, Making Peace was awesome. Go buy it now. Leave a review demanding a sequel, please, because I would like more of these characters.