Yes. Really. I’m not making this one up.

Have you ever seen a planet invaded by rampaging space mutants from another dimension or Nazi dinosaurs from the future?

Don’t let this happen to you!

Rifts happen, so you should be ready when universes collide. A policy with Stranger & Stranger can cover all of your interdimensional insurance needs. Rated “Number One in Customer Satisfaction” for three years running, no claim is too big or too weird for Tom Stranger to handle.

But now Tom faces his greatest challenge yet. Despite being assigned the wrong – and woefully inadequate – intern, Tom must still provide quality customer service to multiple alternate Earths, all while battling tentacle monsters, legions of the damned, an evil call center in Nebraska, and his archnemesis, Jeff Conundrum. Armed with his Combat Wombat and a sense of fair play, can Tom survive? And will Jimmy the Intern ever discover his inner insurance agent? 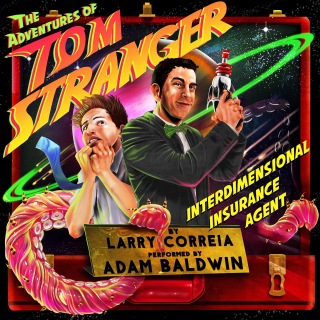 My first response? “Oh good God, what the sweet heck is this?”

But it’s by Larry, and it was free, and I am both cheap and a fan of Correia’s, so why not? I decided to play it while on a trip into Manhattan.

I will say this: I didn’t crash the car.

Chapter 1: Tom’s 9am meeting, takes place in a dimension in which the star of the five-season libertarian space cowboy show (and three blockbuster movies) has become President Adam Baldwin. SecDef is R. Lee Ermey. They are being invaded by the attack of the flying purple people eaters on meth, steroids and rocket fuel. But, thankfully, they have coverage with Stranger and Stranger.

The mediator is Chuck Norris. The awesome is hilarious, as is Baldwin’s impersonation of Norris. Just bask in the awesome.

Best bit of the book. Not only because it blows up a science fiction convention, but because it stars Larry Correia and Wendell the Manatee as CFO of CorreiaTech, creator of the Combat Wombat. There are also legions of Hell invading Nebraska.

Then there’s the Balrog…

Chapter 4: The book gets a plot!

Just when you thought that this was just a string of vignettes from a day in the life of Tom Stranger, surprise, we have a plot. And we make fun of Kung Fu Panda.

I won’t continue with the chapter breakdown, because spoilers would happen, but the short version is that this is off the wall insane and hilarious. Granted, a lot of the humor is of the WTF variety, but it was hilarious.

However, if you dislike having your sacred cows made into hamburger, you might have some problems. Here, Larry takes shots at Obama (Adam Baldwin does a terrifyingly good Obama), Joe Biden (or “the alcoholic clown”) call centers, Kung Fu Panda, squishy degrees, and even nerds to some degree, because Larry’s been to conventions where not all nerds are interesting.

But, yeah, this was a wonderful ball of strange … no pun intended.  Much. 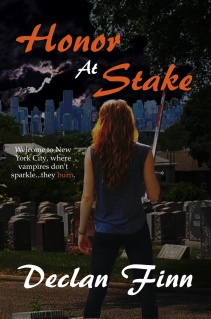 Declan Finn is the author of Honor at Stake, an urban fantasy novel, nominated for Best Horror in the first annual Dragon Awards. He has also written The Pius Trilogy, an attempt to take Dan Brown to the woodshed in his own medium -- soon to be republished by Silver Empire Press. Finn has also written "Codename: Winterborn," an SF espionage thriller, and it's follow-up, "Codename: Winterborn." And "It was Only on Stun!" and "Set To Kill" are murder mysteries at a science fiction convention.
View all posts by Declan Finn →
This entry was posted in Comedy, Fiction, Reviews and tagged adam baldwin, audio book, Comedy, Honor At Stake, Larry Correia. Bookmark the permalink.