Review: Rachel and the Many-Splendored Dreamland 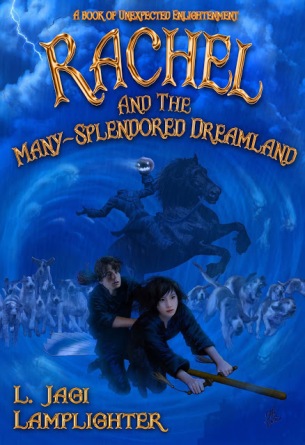 She’s been sent to the infirmary so often, she’s bucking for a record.

She holds secret that could destroy the universe.

Friends have died. She’s been shot at more than most veteran police officers.

We won’t even touch on the dragons, the death cults, the demons, the angels, the elves, gods or monsters. The weight of whole worlds is on her tiny, 13-year-old shoulders….This isn’t even counting school work.

Welcome to round three of the Rachel Griffin novels Rachel and the Many-Splendored Dreamland.

The plot is described as follows.

It’s Halloween at the Roanoke Academy for the Sorc

erous Arts, and Rachel Griffin is stirring up the dead!

All her life, Rachel has wanted to visit Beaumont Castle in the kingdom of Transylvania, the last known location of her hero, librarian-adventurer “Daring” Northwest. Only falling out of the land of dreams onto her face was not how she had expected to arrive.

Now, the castle is right there, looming over her. Only her best friend, the Princess of Magical Australia does not want to go in, so as to avoid an international incident. But what if the castle holds some clue as to her hero’s final fate?

And who was that mysterious figure hanging by the neck she glimpsed in the dreamlands, just before she fell. Could the Dead Men’s Ball, where the spooks and ghosts of the Hudson Highland gather once a year on Halloween to dance to the music of some very unexpected musicians, be the key to discovering the hanged man’s identity?

Where do we start?

Let’s start with some SPOILERS FOR BOOKS ONE AND TWO….Yes, you’d think after my The Raven the Elf and Rachel review, that would have been spoilery. It seriously, seriously isn’t.

So, Rachel has defeated the demon Azrael, fought off a death cult — twice — including a dragon. Surely the cult out to destroy the world is no longer a problem, right?

Due to a magical experiment gone wrong, Rachel goes from New York and ends up in Transylvania, and the children of the night are restless. Due to circumstances beyond their control, a demon is unleashed, Morax …. servant of Moloch.  If you don’t know what Moloch is, then read through the book, and expect it to go dark. And by dark, I mean “When did early Peter Jackson start directing this film?”  Let’s just say that, during the climax of the novel, there is a scene that Ray Harryhausen and Sam Raimi would have loved, because there’s going to be an army of darkness, with no Bruce Campbell. And yes, I really was looking for a chainsaw.

And dang, the references. I wish I could tell you all of the references. From comic books to Norse and Greek mythology, to Biblical in-jokes about the Temple of the Unnamed god (for you biblical type folks who read it, think Saint Paul in Athens). We won’t even go into the lion the size of a plushy doll. I’m trying to figure out if Jagi is amazingly subtle, or hitting readers over the head with a brick. I guess it depends on if you’re an information sponge, like me.

Now, I’m not going to say there’s a shootout every 25 pages …. but there’s at least a shootout every 50 or so. Though this one also places an emphasis on emotional conflict, internally and externally. The Magical Princess of Magical Australia is magically annoying at times, and is getting into problems with Sigfried, who is one part Dickens Character, and one part Parker from Leverage. And, of course, Rachel has do deal with all of the various and sundry crap she never dealt with from the first two novels — ie: she’s dealt with none of the trauma she’s already gone through. Because, you know, that’ll make for a mentally healthy 13 year old.

I do so enjoy these books. There is no question of Rachel just happening along as she trips over the solutions to problems. Rachel is a highly active character. She knows there is an enemy, and is doing everything in her power to stop it. It’s highly refreshing after certain other YA novels spend most of their time overhearing just the right conversation to get some detail, and have some Hermione look up the data for them.

It’s also nice to see that, in all three of these novels, the adults aren’t completely useless. In fact, they’re doing something odd — like THEIR JOBS. The adults have a learning curve. Like “Gee, maybe we should listen to the children here.” Or even better: “Hey! Maybe we should give our kid a fast-acting wand to shoot spells against the bad guys who seem to be actively out to kill them.” The adults here are at least smart enough to conclude that, yes, the kids really are in danger, they really do know that something is going on, and the next time something like this happens — because it’s obvious even to the characters in universe that something is going on — that the kids should be allowed to defend themselves…

… I didn’t realize this while reading it, but looking over that paragraph makes me think this novel has a Second Amendment commercial in there somewhere.

Rachel and the Many-Splendored Dreamland also expands the world. We know more of the culture of Australia and Transylvania, and even hints at Bavaria.  More importantly, we get more and more glimpses at what the “World of the Unwary” looks like, from cops to how historical events are handled.

Rachel and the Many-Splendored Dreamland wraps up many of the plot points in a neat little bow. The main plots of the book are neatly cleaned up. But that never stopped Rachel from getting into trouble, usually on the same exact day the last book ended. And there are still enough dangling threads that show some of where book 4 is going to go: more interpersonal complications to wrap up, psychological damage to at least two of our main characters to fix, as well as the hole in the world that needs to be dealt with. Heck, we’ve barely touched on a violent episode that happened back in book 1, but was revealed in book 2, and only barely mentioned later on….Right now, I don’t know if I approve, or disapprove of how it’s being handled, or not handled, as the case may be. I’ll bring it up in a later review, should they focus on it some more.

All in all, I am enjoying the heck out of this series. Keep in mind, I typically hate YA novels. You have to be Timothy Zahn or David Weber to make me read it. But, like Narnia, this series really is too good for children.

Declan Finn is the author of Honor at Stake, an urban fantasy novel, nominated for Best Horror in the first annual Dragon Awards. He has also written The Pius Trilogy, an attempt to take Dan Brown to the woodshed in his own medium -- soon to be republished by Silver Empire Press. Finn has also written "Codename: Winterborn," an SF espionage thriller, and it's follow-up, "Codename: Winterborn." And "It was Only on Stun!" and "Set To Kill" are murder mysteries at a science fiction convention.
View all posts by Declan Finn →
This entry was posted in Fantasy, Fiction, Reviews. Bookmark the permalink.