Why do we even do this anymore? No, really, WHY?

I asked this on Facebook, and the closest I got to a defense of Daylight Saving Time (Summer Time for the rest of the world) was “Some of us don’t stay in and watch TV all day.” Yeah, I don’t either. I don’t have the time. I had to drop all TV watching this season, which means that aside from perhaps watching Daredevil at a fairly slow pace, I’m going to have to catch up with my geek shows when they’re out on Netflix.

So the closest we have to a “good side” to everyone in the United States (except for Hawaii and Arizona, where they’re slightly more sane) disrupting their schedules every year is “I like going outside, so I’m going to inconvenience everyone.”

Yes, I realize that 9-5 jobs mean you can’t, in fact, just wake up an hour earlier and have the same effect; but how many of us do a lot of outdoorsy stuff on a weekday? Wake up earlier on the weekend, or on your day off, and enjoy the outdoors. I’m fine with that. I like being outside. I wish I could hike. I can’t, but that doesn’t mean I don’t want others to avoid it. I just want to not have to change the clocks twice a year.

It’s completely pointless, too. You can read various summaries of the costs of DST — the net costs, not just “Hey, here are some downsides”; I mean that there is a net cost and no resource savings from DST — all over the Internet. Here’s one that does an excellent job of linking to various sources. Or you could watch the famous CGP Grey video, which I share twice a year online in the hope that someone, somewhere, will tip the balance and we can finally end this insanity.

Still, I find something amusing in this mess. I don’t just mean it’s yet another example of cultural weirdness (though it certainly is that).  I mean personally.

See, I have a sleeping disorder, which causes me to naturally move through the clock by about 40 minutes to an hour each day. No matter what, on a normal day, even if I turn off the light at the exact same time, I go to sleep and wake up on an increasingly “off” schedule. I barely got through college (oh, I’m immune to caffeine, too — go big or go home!), and only because I had to sleep for twelve hours on Saturday or risk debilitating migraines.

(And yes, I’m fully aware that the cycle I describe is almost exactly in sync with Mars’ rotation. Clearly, I’m an alien.)

Fortunately, I have a great job that lets me telecommute most of the time. I can, for the most part, work on my own hours and get stuff done. (As I write this, for example, it’s 3am in my time zone; but it’s the early afternoon as far as my body is concerned.) The difficulty comes when I have to go interact with the outside world. Sometimes I’ll show up to an event looking like I just woke up . . . because I have.

So that’s the small, small bit of amusement I have at this time of year. Well, more schadenfreude, really. It’s the one day of the year when everyone around me knows just what it feels like for me, every single day. 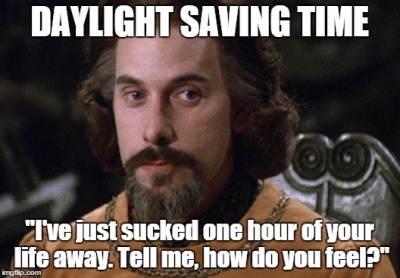 Matthew Bowman is a traditionally-minded Catholic convert and freelance science fiction and fantasy editor, which means that he's in high demand in a small population. Fortunately, he loves talking about stories. And Catholicism. And history. And philosophy. And lots of other stuff.
View all posts by Matthew Bowman →
This entry was posted in Commentary, Personal Posts, Rants and tagged Daylight Saving Time. Bookmark the permalink.

2 Responses to The Pointless Clock Change