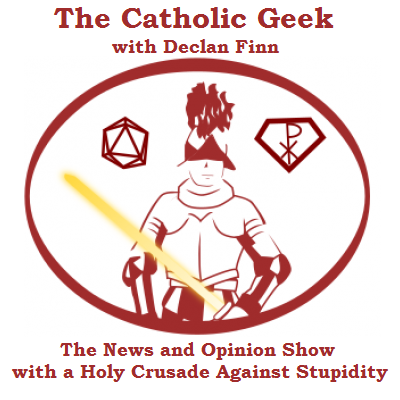 In this episode of The Catholic Geek, we had…

Gimli vs. the Modern World

Stupid celeb news with an AOL headline that reads “Kristen Stewart opens up about her sexuality: Says she’s ‘not hiding’” Dear miss Stewart, please, hide. Run away and never come back. You cannot act, even with the sparkly vampires. Frankly, at the end of the day, you played a mindless, souless, bloodsucking monster for five movies, we’ve had more than enough of you – for those people who follow Twilight, yes, I know Bella was only a vampire for the last film or two, but there are different kinds of bloodsucking monstrosities out there. And from what little I can tell, Stewart doesn’t act in any of her films, she really is that bland.

But it’s nice to see that if some celebutard wants to grasp at the fading spotlight, they can just “open up,” and “be real,” and seriously, how many of my listeners honestly give a darn?

Trump is even dumber than we thought.

And Anne Rice talked about how Political correctness wages war on good books.

Declan Finn is the author of Honor at Stake, an urban fantasy novel, nominated for Best Horror in the first annual Dragon Awards. He has also written The Pius Trilogy, an attempt to take Dan Brown to the woodshed in his own medium -- soon to be republished by Silver Empire Press. Finn has also written "Codename: Winterborn," an SF espionage thriller, and it's follow-up, "Codename: Winterborn." And "It was Only on Stun!" and "Set To Kill" are murder mysteries at a science fiction convention.
View all posts by Declan Finn →
This entry was posted in Analysis, Comedy, Commentary, Fiction, Rants, Science and Technology, Thriller and tagged BlogTalkRadio, The Catholic Geek Radio Show, Writing. Bookmark the permalink.