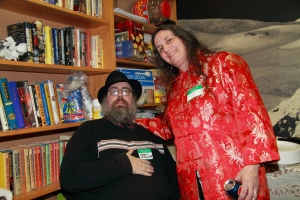 Wright and Lamplighter at the BSFS 50th anniversary party.

They say that Hollywood is running out of ideas, but this is ridiculous now.

The 2007 film The Golden Compass was from the novel of the same name, written by Philip Pullman, the first in the His Dark Materials trilogy. The author wanted to make an atheist’s Narnia fantasy series.

If you haven’t heard about it, I strongly suggest you listen to John C. Wright on the topic, it’s wonderful. Especially since he liked the first book (the only person I know who actually got through it) and wondered what happened to the rest of the series.

However, the movie — starring Daniel Craig (Skyfall), Ian McKellen (Lord of the Rings), and Nicole Kidman (The Protector) — died a horrible, screaming while on fire death at the box office. It cost $180 million to make it, and brought in a total, worldwide box office of over $372 million. To compare, the entire Lord of the Rings trilogy cost around $281 million.

The film bombed. Critics weren’t positive about it. Even Pullman hated it. one figured that the entire series would stay dead as a franchise from now on.

But now, the BBC want to make His Dark Materials into a TV series.

Why? I have no idea. John Wright and his wife are the only two people I know who finished the series, and even though they liked book 1, they’re still waiting to a sequel to that book — one that makes sense.

Also, an atheist Narnia that has the protagonists going to kill God … does that sound like fun to anybody?

Declan Finn is the author of Honor at Stake, an urban fantasy novel, nominated for Best Horror in the first annual Dragon Awards. He has also written The Pius Trilogy, an attempt to take Dan Brown to the woodshed in his own medium -- soon to be republished by Silver Empire Press. Finn has also written "Codename: Winterborn," an SF espionage thriller, and it's follow-up, "Codename: Winterborn." And "It was Only on Stun!" and "Set To Kill" are murder mysteries at a science fiction convention.
View all posts by Declan Finn →
This entry was posted in Analysis, Fantasy, Fiction, News and tagged Books, Film, John C. Wright, Movies. Bookmark the permalink.