There They Go Again: Another Episode of “Pope Francis Said What?”

Once again, the Pope has said something that the media has picked and run with, cackling in glee at further proof of how a left-wing agenda is supported by the Church they reject. Let’s start by looking at what the Pope actually said about money in his latest South American speech:

Time, my brothers and sisters, seems to be running out; we are not yet tearing one another apart, but we are tearing apart our common home. Today, the scientific community realizes what the poor have long told us: harm, perhaps irreversible harm, is being done to the ecosystem. The earth, entire peoples and individual persons are being brutally punished. And behind all this pain, death and destruction there is the stench of what Basil of Caesarea called “the dung of the devil”. An unfettered pursuit of money rules. The service of the common good is left behind. Once capital becomes an idol and guides people’s decisions, once greed for money presides over the entire socioeconomic system, it ruins society, it condemns and enslaves men and women, it destroys human fraternity, it sets people against one another and, as we clearly see, it even puts at risk our common home.

This quote comes from The Daily Caller, which for once seems to have the best and most fair analysis of a religious topic that I’ve been able to find, after looking at several different sites that are covering this speech. Reuters gives some excerpts with little bias (at least, compared to The Telegragh‘s blatant attempt to rephrase His Holiness’ words). Catholic News Service gives a decent analysis, but I think it’s safe to say that The Daily Caller gets the trophy this time around. They actually did research. When’s the last time a media reporter did their job? They normally can’t be bothered to use Wikipedia anymore, much less crack open a book.

So as we can see (and I do encourage you to look at the full analysis; good journalism should be rewarded with hits), Pope Francis clearly calls out as a sin something that the Church has always identified as a sin: the accumulation of wealth for no purpose, which I understand kids these days call “greed.” As I recall, a certain carpenter from Galilee spoke at length on the dangers of this particular sin, mentioning money more times than He ever mentioned Heaven or Hell. It’s a particularly insidious sin, and like all sins does more damage to the sinner than it ever will to anyone else.

Of course, that same carpenter never condemned the accumulation of wealth, any more than He condemned love as lust, or anger as wrath, or the day of rest as slothful. A sin is not a thing; it is the way in which a sin is used. You sin before you perform any outward action, because it is the decision that matters. This is something Christians insisted on, in the face of pagan attitudes to the contrary: you are responsible for your own deliberate actions, not mistakes or the actions of others.

Simple, obvious, and to the point. And of course the headlines agree. “Pope Condemns Greed, Calls for Compassion Toward Poor.”

They’re seriously counting on people not reading the articles. They’re barely even bothering with mistranslations anymore. They’re getting so sloppy in the body of the article that it’s clear they don’t think you’re going to scroll down that far. And I don’t think it’s a vain assumption; from what I understand, even Rush Limbaugh isn’t bothering to look closer, even when a caller delivers him the facts on a silver platter. 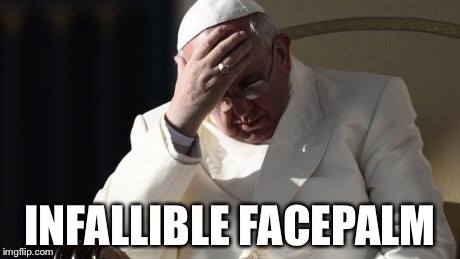 Of course, that’s not the only thing that Pope Francis said. Somewhat lost in the flurry over his “condemnation” of capitalism is his apology, building on something Pope St. John Paul II said, for the Church’s role in atrocities in Latin America.

Someone asked us on Twitter what this means, as she couldn’t remember the Church sponsoring any atrocities. The answer, of course, is the same as for the abuse scandals in recent decades: any wrongdoing by one who represents the Church is laid at the Church’s door.

This might seem unfair, but it is as it should be. Not that the Church is complicit in a single priest’s sin, but because the Church is responsible for her priests. It never works out to have it both ways, and the Church learned long ago that the buck stops a lot higher than the individual parish. It has to.

No, the Church has never preached for atrocities or conversions by the sword, any more than she’s preached that priests should abuse children or keep mistresses. That doesn’t mean that individual priests haven’t screwed up, or that other priests and bishops haven’t helped after or even before the fact. The Church is made up of humans.

Of course, it’s also evidence of a higher authority, precisely because no matter how many times a priest, bishop, or even a pope decides he’s above the moral law, the Church has never altered her doctrine. Even Pope John XII, infamous for his depravity (he’s the one that’s said to have toasted Satan in thanks for his wealth), never tried to change the rules to suit himself. In two thousand years of being run by sinful men, the Church has never once changed doctrine to say that something that was once a sin is no longer forbidden. Which, perhaps, means that the Church isn’t actually run by mere men.

But the Church is still responsible for the actions of those that have abused the authority given them. In every case I know of where a priest has called for an atrocity — sadly, I know of several in history, and that’s not even counting tainted anti-Catholic sources — it has been because the priest has forgotten his role. He stands up and says that the secular authority must enforce Church law, or accepts that the local authority has authority over the Church.

This is something that the Church herself has rejected since Constantine, if not before. The Church has always preached a separation of church and state; not the kind that has happened in the last century, but rather the kind that the early United States understood was necessary to prevent disaster. When a state tries to dictate religious belief, or when a church attempts to form public policy, it never ends well. When you can claim God is on your side, blessing your every move, your authority is unlimited — and that way leads to the deadliest sin of all: pride.

So no, the Church never called for pain and suffering to be waged on the innocent, for native populations to be treated with disdain because they are not Christian, or that war should be blessed. Not even the Crusades were blessed in that way; war is never anything more than a last resort before a greater evil, and the Church has never and will never treat it as anything higher.

But when a man in black, with a Bible under his hand and the words of the Church on his lips, preaches with his authority on something that he has no just authority over, it is the Church’s duty to put a stop to it. The Church may move too slowly to satisfy people, even before the age of near-instant communication, and those in authority may be reluctant to exercise it, but that does not remove that responsibility. That is why Pope St. John Paul II went out of his way to address these issues, and why Pope Emeritus Benedict XVI did the same. The only thing Francis does differently is that he lacks half the eloquence of either, much less their understanding of the media.

Matthew Bowman is a traditionally-minded Catholic convert and freelance science fiction and fantasy editor, which means that he's in high demand in a small population. Fortunately, he loves talking about stories. And Catholicism. And history. And philosophy. And lots of other stuff.
View all posts by Matthew Bowman →
This entry was posted in Analysis, Commentary, News, The Church and tagged Capitalism, Constantine, Greed, Pope Benedict XVI, Pope Francis, Pope John XII, Pope St. John Paul II, Rush Limbaugh, Separation of Church and State, Sin, The Crusades, War. Bookmark the permalink.

4 Responses to There They Go Again: Another Episode of “Pope Francis Said What?”