For those of you who are suffering from a deficit of Sherlock, wondering why Robert Downy Jr. hasn’t made another Sherlock Holmes film already, and the okay-Elementary isn’t really cutting it, have we got something for you.

When Ann Margaret Lewis wrote Murder in the Vatican: The Church Mysteries of Sherlock Holmes, she had the venerable detective come face to face with Pope Leo XIII, with a guest cleric named Father Brown. Holmes solved mysteries that Arthur Conan Doyle only hinted at in his books — Sherlock fans will recognize the title of the short story “The Vatican Cameos.” 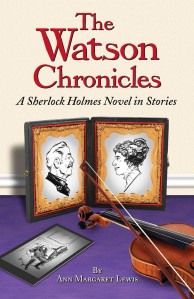 The premise: this book takes place in the latter years of Sherlock Holmes’ career. He is about to move to Sussex and raise bees (a retirement he had been threatening for years), and Watson decides to go back into private practice (since he had given up his last practice to live off of his stories published in The Strand). Watson has a nervous landlord, a sickly partner, and a lovely upstairs neighbor.

But, as with Jessica Fletcher, the bodies are soon hitting the floor, and Watson is drawn into international intrigue and murder, and requires the aid of not one but two Holmes brothers.

And that’s just the first part of The Watson Chronicles: A Sherlock Holmes Novel in Stories. True, it’s broken down into short story format, but it’s a novel, plain and simple, written in such a fashion as to mirror the writing style and structure as Arthur Conan Doyle. And if you don’t believe that she writes in his style, I tell you that even the paragraph structure reads like Arthur Conan Doyle.

Lucy is a bit of a saint, with all the flaws that implies. And if you don’t think a saint can be flawed, read some of the lives of the saints sometimes; there is a reason the church says that saints are to be admired, not necessarily imitated. It becomes an interesting time having a Polish-American Catholic working with two British Anglicans. She is a great addition to this established cast of characters, and works well with all the moving parts involved.

Great line: “One way to impress a Catholic girl is to tell her that you met the pope.”

One of the fun parts of this book — and there are so many, it’s hard to count — is the way Lewis has the stories interact with “reality.” Basically, Watson’s a writer, and writers get feedback, whether they like it or not. There are some stories that are published years apart, and why is that? How does Watson deal with his own fans? That sort of thing.

Lewis also addresses the little feature of how it was ten years between Holmes’ death and resurrection in print, but only 3 years in the Holmes universe, leading to lines like “I’m so glad to know you’re not dead.”

And Mycroft Holmes gets his own murder mystery to solve. It’s fun. Then again, Mycroft and Sherlock actually act like brothers, at one point one-upping each other. (Great line #2: “Holmes, you do not like women. Well, I don’t like people.”) And then there’s the story of his time in Montenegro, which makes for an interesting nod to another overweight genius in detective fiction.  As with Murder in the Vatican, there are moments of “Wow. She went there.”

I’m trying to put into words just how much I like this book, and it’s hard. It truly is. Especially since I don’t want to come off as a fanboy. This book is so good, I’m almost sad that there is no sequel already; though the ending makes for such a good conclusion to Lewis’ Sherlock works, as well as the entire Holmes canon. I’m not exaggerating. With Murder in the Vatican, I want to go back and reread all of these stories in order with the original Arthur Conan Doyle works, but I’m afraid that he will come out the worst for it. But if I do, The Watson Chronicles will be the last thing I read, just so I can end it all on a high note.

Okay, let’s skip to the interesting part. Buy this book. Buy this book now. If you didn’t buy Murder in the Vatican, what are you waiting for? Buy that too.

While you’re at it, buy a dozen other copies for your friends and family. Buy as many books as you have friends. You’ll thank me for it, and so will your friends. I’m not even exaggerating.

You want more reasons? Because Ann Lewis has taken every single hole left by Arthur Conan Doyle and filled it. Did you know that Watson had three wives because Doyle couldn’t keep track of the names or who he had killed? Ann Lewis filled all of that in. Did you know that ACD couldn’t remember if Watson had been shot in the leg or the shoulder? Lewis addresses that too.

You’re going to read this book for every little character touch between Holmes, Watson, Lucy and Mycroft — Mycroft, who is a major player in this book that he never was in actual Sherlock canon, and he has some of the best lines in this book, even when he’s not recreating natural law. You’re going to read this book for Dr. Watson’s wedding being presided over by the “inscrutable” Father Brown, and to see almost every single case Sherlock Holmes has ever solved come back to him in one of the most touching, tightly written, canon-filled and canon-filling books put on paper.

And you’re going to read this book because it is one of the best, most touching, hilarious, heart warming, tear-jerking Sherlock Holmes novels ever written.

Stop reading this review, click on the link, and start reading. Go. Now. Don’t just stare at the page, go.

Declan Finn is the author of Honor at Stake, an urban fantasy novel, nominated for Best Horror in the first annual Dragon Awards. He has also written The Pius Trilogy, an attempt to take Dan Brown to the woodshed in his own medium -- soon to be republished by Silver Empire Press. Finn has also written "Codename: Winterborn," an SF espionage thriller, and it's follow-up, "Codename: Winterborn." And "It was Only on Stun!" and "Set To Kill" are murder mysteries at a science fiction convention.
View all posts by Declan Finn →
This entry was posted in Fiction, Historical, Mystery, Reviews and tagged Ann Margaret Lewis, Arthur Conan Doyle, Murder in the Vatican, Mycroft Holmes, Sherlock, Sherlock Holmes, The Watson Chronicles. Bookmark the permalink.

3 Responses to Review: The Watson Chronicles