Still working abroad, Detective Tommy Nolan has a hot tip that leads him to Germany. Women and children are disappearing from Catholic Bavaria. The local police have their hands tied. Tommy is the last hope for answers.

Yet again, Tommy is in over his head. What starts as a sex trafficking ring turns into a terrorist conspiracy to unleash Hell on Europe. To stop it, Tommy must fight Nazi vampires, terrorists, and a swarm of succubi who want him as their next meal. Tommy has always crusaded for justice. But now he might be on his last crusade.

This one has everything.

We have Winged Hussars.

We have Jihadi Nazi vampires.

We have succubi running a sex trafficking ring.

We have the nightclub scene from John Wick (dead puppy not included).

We have telekinetic teenagers.

We have mechs versus kaiju dragons — yes, I managed to stuff in one of those, too.

And we have a cover. 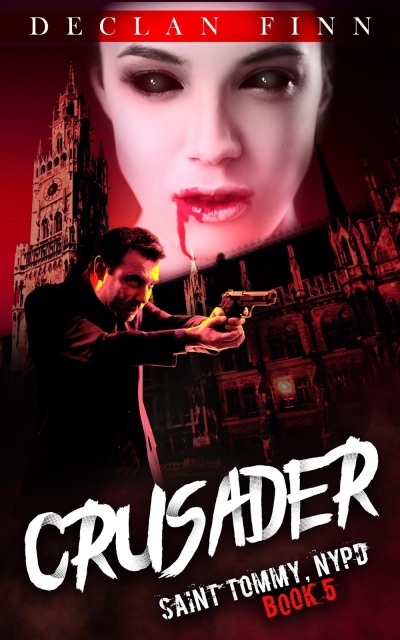 You can get Crusader here

Declan Finn is the author of Honor at Stake, an urban fantasy novel, nominated for Best Horror in the first annual Dragon Awards. He has also written The Pius Trilogy, an attempt to take Dan Brown to the woodshed in his own medium -- soon to be republished by Silver Empire Press. Finn has also written "Codename: Winterborn," an SF espionage thriller, and it's follow-up, "Codename: Winterborn." And "It was Only on Stun!" and "Set To Kill" are murder mysteries at a science fiction convention.
View all posts by Declan Finn →
This entry was posted in Fantasy, Fiction, Thriller. Bookmark the permalink.