Hello, sports fans! This is your friendly neighborhood admin speaking. Due to Declan being offline for the weekend with a severe case of convention attendance, I will be filling in this week on The Catholic Geek Radio Show! 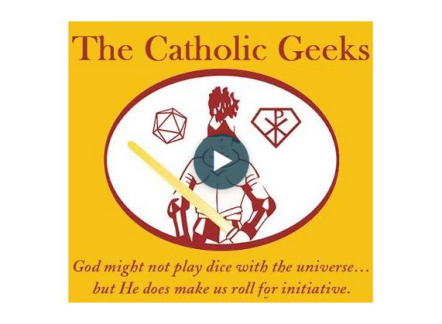 What’s this week’s topic? Well, Declan was originally planning on broadcasting from the convention itself, but that plan fell through, so we’re tag-teaming a switch hit in the ninth inning while only ten yards from the goal line. We’ll be talking about everything from space news to Church news, Lego building to worldbuilding, the new Catholic Geek Library, and why this particular geek should never be allowed to attempt sports metaphors. I’ll be taking your calls and chat room comments as they come in, too.

One thing I can promise you: this will be an election-free podcast. Hey, that’s worth tuning into right there, huh?

Oh, and if you’re wondering where that mysterious chat room is? Just click on the show link above and scroll down on that page. They hide it for your convenience. The call-in number is over there as well.

Matthew Bowman is a traditionally-minded Catholic convert and freelance science fiction and fantasy editor, which means that he's in high demand in a small population. Fortunately, he loves talking about stories. And Catholicism. And history. And philosophy. And lots of other stuff.
View all posts by Matthew Bowman →
This entry was posted in Blog News, News and tagged Lego, Space, The Catholic Geek Radio Show. Bookmark the permalink.