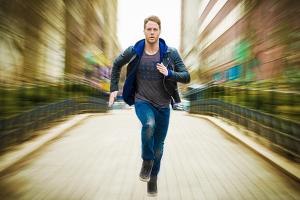 This show is based off of the film of the same name.  While I have never seen it (nor had I heard of it at the time),  I have gathered that the film starred Bradley Cooper. In it, Cooper plays Edward Morra, a fellow who has gotten his hands on a drug called NZT.  NZT is supposed to enable a person to use 100% of their brain — because it’s working on the myth that humans use only 5% of our brains (we actually use all of it, it’s just used for various and sundry functions).

In the tv show, Bradley Cooper is back as Morra, and has chosen a random schlub, Brian Finch, a wannabe musician, to grace with doses of NZT. This of course brings him to the attention of the FBI, as represented by Debra Morgan from Dexter, and the first ME from NCIS: NY

Anyway, Limitless starts in mid-action, backtracks to Finch’s personal history as a failure, as well as his father’s (Ron Rifkin, Alias) medical issues. Frankly, they didn’t need to layer on the “loser” factor so much. It took five, maybe six minutes of the episode before Finch gets his NZT and becomes interesting — filing hundreds of personnel records, doing Flight of the Bumblebee on an electric guitar, diagnosing his father’s ailment.

Of course, Finch becoming interesting comes at a price. His original NZT dealer (not Cooper’s character) is murdered, he’s found with the body at the crime scene, and in order to get away, Finch is off and running.  And that’s the 20-minute mark.

The pilot progresses to a simple premise: people who are using NZT at a law firm are showing up dead, being murdered for this super-smart pill. After a confrontation with the killer, Finch is wounded, and Morra — now a Senator — has to come to the rescue, providing more NZT, a shot to prevent side effects (which includes death).

So of course, he finds the bad guy, the FBI recruits him as a consultant, and a tv show is born.

Really, at the end of the day, I can only suspect that someone watched Sherlock and decided “We need to go full Cumberbatch, because smart people are entertaining.” Some of the same tricks are used — the graphics to represent thought, stopping the action to go through his thought processes.  He hasn’t used a memory palace yet, but he’s already used a perfect memory to connect a collection of dots. And it’s interesting in that when the pull wears off, Finch isn’t exactly a dummy.

Honestly? The show is strangely engaging.  It’s fun. I’m surprised. In fact, I thought I was going to turn it off in the first five minutes. But, as pilots go, it wasn’t so bad.  And it might go somewhere.  Right now, this was a proof of concept episode. And I’m good with that.

Declan Finn is the author of Honor at Stake, an urban fantasy novel, nominated for Best Horror in the first annual Dragon Awards. He has also written The Pius Trilogy, an attempt to take Dan Brown to the woodshed in his own medium -- soon to be republished by Silver Empire Press. Finn has also written "Codename: Winterborn," an SF espionage thriller, and it's follow-up, "Codename: Winterborn." And "It was Only on Stun!" and "Set To Kill" are murder mysteries at a science fiction convention.
View all posts by Declan Finn →
This entry was posted in Commentary, Fiction, Reviews, Science Fiction. Bookmark the permalink.