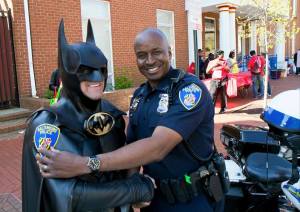 No, that’s not the next strange DC Comics storyline involving the Caped Crusader. Lenny B. Robinson, who spent his time and money visiting sick children while dressed as Batman, died yesterday in a car accident in Maryland.

You might remember stories about this particular philanthropist, who made headlines three years ago after a viral video was posted showing him getting pulled over by Montgomery County Police (not all that far from my own house, actually). Robinson sold a successful business for a very tidy sum, and decided to use that money to change both his life and the lives of others. Like Bruce Wayne, he turned his fortune into an arsenal that included a custom suit, a customized car, and a lot of toys to hand out to hospitalized children.

Okay, Wayne didn’t hand out Batman merchandise to kids, but I bet he arranged it somewhere in the comics through some shell corporations. (In fact . . . hey, DC? Stick that in a comic book sometime. Name the guy Lenny.)

Here’s an ABC News segment from a few years ago, showing the traffic stop and how Robinson began his new job, sometimes accompanied by his son who dressed as Robin. (And I’m sure no one ever made an unoriginal joke about that name.)

The part that really gets to me is always how happy the adults are. Kids can be very resilient, and they don’t always understand what’s going on the way an adult can. That’s sometimes a blessing — the kids haven’t had time to learn all the ways things can go wrong, so they don’t get as worked up about it. A lot of the time, if they get worried and upset, its because the adults around them — the ones who are supposed to be confident and in control — are worried and upset in the first place. Robinson made the adults feel better too, and that helped everyone.

He also recalled the comment from parents that he heard, and coveted, most: “this is the first time my son or daughter has smiled in months.” (Link.)

And Robinson said it changed him, making him a better person. Read the Washington Post article I linked to; that’s a very good man, and a better role model than most.

But no one adored Robinson more than Elizabeth Gardner, who suffers from TAR Syndrome, a rare disorder that reduces her platelets and has left her arms severely shortened.

She was 6 — and intensely afraid of costumed characters — when she first met Batman.

“It was such a huge, huge moment in that he was able to break down that barrier,” said her mother, Lisa. “He just had a beautiful spirit about him.”

Elizabeth later told him that she was being bullied by other kids at her elementary school.

“They don’t believe that Batman is my friend,” she told him.

So, Robinson went to school with her, appearing in full costume before the student body. He told them bullying was wrong and called her onstage to give her a Batman necklace.

Elizabeth, he announced, is my friend.

Godspeed, Batman. You’ll be missed by many.

Matthew Bowman is a traditionally-minded Catholic convert and freelance science fiction and fantasy editor, which means that he's in high demand in a small population. Fortunately, he loves talking about stories. And Catholicism. And history. And philosophy. And lots of other stuff.
View all posts by Matthew Bowman →
This entry was posted in News, Superhero and tagged Batman, Lenny B. Robinson. Bookmark the permalink.