The Incarnation and the One Ring

Kind of like remembering a messy divorce, only with more epic battles.

That’s right, Tolkien fans. Tomorrow, the 25th of March, is the anniversary of the day when, mumbleteen thousand years ago, Frodo, Sam, and Gollum entered Mount Doom to pitch the One Ring into the fire below. I’m posting a day early because we tend not to get as much traffic on a Saturday, and you’d hate to miss such a momentous occasion, right?

“Wait,” some of you are asking, “Why did Tolkien use modern dates in a fantasy world like Middle-earth? I mean, I get that it’s supposed to be our super-duper epic forgotten past, but really.”

Yeah, I get that. But you also have to remember that Tolkien was three things, in this order: a proud Catholic, an expert philologist, and a fascinated medievalist. What does all that have to do with March 25th, also known as the Feast of the Annunciation? I’m glad you asked!

First, while all three of these are intertwined, let’s just look at the basic religious significance of the day. See, in the Roman Catholic Church, as well as in a few other religious denominations, today marks the Feast of the Annunciation. It marks the point in the Bible when an angel appeared to Mary and said “Congratulations, it’s a boy.” (Or something like that.)

But why is it celebrated on March 25th? Is it just some sort of arbitrary date, like Christmas?

Not quite. Remember, we’re spiritually descended from the Jews, and a lot of our Catholic traditions stem from that connection. In ancient Hebraic tradition, there are certain times of the year that momentous events happen. One such time is the beginning of spring; it’s traditionally, for both Jews and Christians, the anniversary of when God created the world. It’s also the time of the year when Passover occurs, and in ancient Israel marked the beginning and ending of many contracts and other agreements. One might even use the term . . . covenants.

Now, this matters to a philologist who is interested in the medieval period (particularly British antiquity), because philology is about more than just the study of language; it’s about the study of language from written sources, and how people transmitted their ideas. That means you pick up a lot of the significance behind what those same people did and thought. While I personally suck at languages other than English, I’ve always been fascinated by the related area of history (called “intellectual history”), and that was my specialty when studying. (Seriously, if you like studying stories and not just writing, go study history.)

In centuries past, the colloquial name for the Feast of the Annunciation in England was  “Lady Day,” and the medieval English shared a common attitude about the day with their continental counterparts. In a continuing tradition that lasted until at least the Industrial Age, Lady Day was associated with new beginnings. In Dante’s Divine Comedy, the day that the poet begins his journey is March 25th, which was also Good Friday; it was considered particularly lucky to have Good Friday fall on March 25th, though it’s hard to track how many times that actually happened (Dante just used poetic license, for example), because not only has the dating of Easter changed over the years, but we’ve also shifted the calendar by thirteen days.

(However, if you’re looking for an excuse to buy a lottery ticket, you might want to try elsewhere. Good Friday won’t fall on March 25th again until 2157.)

Like in ancient Israel, contracts often began on March 25th, and in England it was considered the start of the new year. Mind you, they actually had four different years for a long time in England: the historical year, dating from January 1st; the regnal year, dating from when the current king or queen was crowned; the fiscal year, dating from September 29th, when a new government budget was begun; and the legal year, Lady Day. The fiscal year is still observed that way in the United States’ federal budget, though it was moved by two days to October 1st; and both the US and the UK inherit the approximate date when taxes are due from March 25th. In the UK, it’s April 6th, a straight 13 days from March 25th, reflecting the shift to the Gregorian calendar. Later, in the US, we just rounded it to the middle of the month and then forgot why.

And that shift in the dating system was used by Tolkien as well. If you read the Appendices, you might be excused for missing this little gem: “There is no record of the Shire-folk commemorating either March 25 or September 22 [the birthday of Frodo and Bilbo]; but in the Westfarthing, especially in the country round Hobbiton Hill, there grew a custom of making holiday and dancing in the Party Field, when weather permitted, on April 6.” Perhaps a little silly, since this supposedly took place before most of recorded history, and certainly before the Gregorian calendar-shift; but then again, The Hobbit refers to hobbits as existing today as well. And he never said when the custom started, did he? 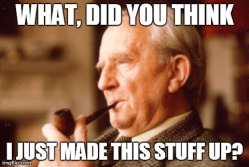 So, because of all this, Tolkien selected March 25th as the momentous new beginning for Middle-earth. After all, he wasn’t writing an historical account; he was writing a mythology that never existed, as if told by a medieval chronicler who gathered all the details, and then translated by a 20th century scholar. Tolkien might have disliked allegory, but he loved applicability, and no doubt the history of March 25th was simply too good to pass up.

Oh, and incidentally: you now know that the dating of Christmas as December 25th, nine months after March 25th, is not, in fact, arbitrary at all. The next time someone says that, you’ll know what to say in return.

And so, again: happy Ring Destruction Day! And happy Feast of the Annunciation!

Matthew Bowman is a traditionally-minded Catholic convert and freelance science fiction and fantasy editor, which means that he's in high demand in a small population. Fortunately, he loves talking about stories. And Catholicism. And history. And philosophy. And lots of other stuff.
View all posts by Matthew Bowman →
This entry was posted in Culture, History, Resources, The Church, Tradition and tagged Christmas, Incarnation, J. R. R. Tolkien, The Feast of the Annunciation, The Lord of the Rings. Bookmark the permalink.

1 Response to The Incarnation and the One Ring