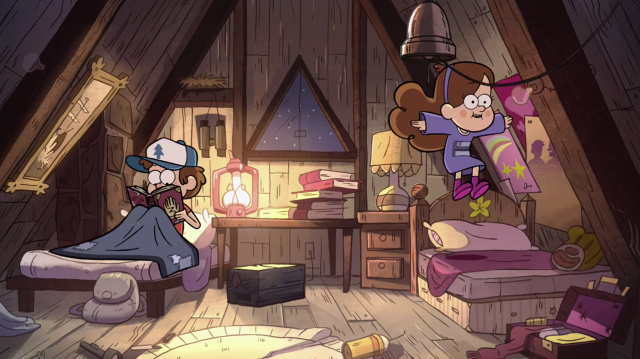 I suppose it was inevitable that I would like Gravity Falls. It’s weird, it’s set in the Pacific Northwest (I grew up in western Oregon), and there‘s tons of lore, mystery, and goofiness to top it off. But we’ll get to all of that later. Gravity Falls just wrapped up its second (and final) season, and it was a doozy of a run by the end. It’s a paranormal mystery show about twin siblings who spend the summer at their great-uncle’s tourist trap, the “Mystery Shack”. Naturally, it’s full of sham attractions designed to sucker in out-of-towners (and the townsfolk who like spending money at the place), but when the twins start digging around, they discover that there’s actual weirdness going on in the town…

The setup is simple: Dipper and Mabel Pines (the twins) are stuck at their Great-Uncle Stan’s decrepit (but massive) cabin in the woods of Eastern Oregon, near the small town of Gravity Falls. He’s rigged it to be a tourist trap, because there’s little that Stan loves more than making money off of out-of-town suckers. That’s about when Dipper stumbles across a mysterious journal that contains information about some really bizarre stuff around Gravity Falls. Being the curious adolescent that he is, he starts poking around, and naturally his twin sister Mabel gets involved. That’s when the fun begins.

For most of the show’s tenure, each episode sees the twins coming into contact with a new bizarre entity. Between mad scientists’ inventions, fantasy creatures, cryptozoological specimens, and much more, Dipper and Mabel keep getting faced with weird stuff, each time figuring out how to solve the problem or defeat the enemy. What really sells the show, however, is that they use the Monster of the Week format to delve into their characters. The creator, Alex Hirsch, specifically wanted each episode to explore something particular about a character, and that makes the episodes much more interesting than one-off Twilight Zone-style fare. It also helps to keep the more gonzo elements of the show grounded, in a way.

As the first season approaches its close, you can see a “myth arc” starting to form, with little hints and cryptic clues accumulating. The myth arc comes to the forefront in the second season, building to a truly epic finale, although season two is still heavily dotted with entertaining one-off episodes, which is at times a relief from the heavy, serious plotting of the myth arc. We get introduced to a narrative that runs not just through the history of the town, but also through the history of Stan Pines and his family. The end result is a strong story that throws questions at the viewer and then leaves them hanging for a few episodes, or more.

The Heart of Gravity Falls

Gravity Falls is filled with an eclectic cast of characters, and it’s the relationships between those characters that really make the show thrive. You’ve got Dipper, Mabel, and Stan, who form the core of the show, then you have characters like Soos and Wendy who work at the Mystery Shack, and who themselves have circles of friends and family who get roped into the show. You also have the denizens of the town, like Toby Determined the news reporter and Lazy Susan the one-eyed diner owner, just to flesh things you. But let’s take a look at the most key characters in the show, because they’re the hub that it spins around.

Dipper: the bookish, inquisitive twin, he thinks of himself as more experienced and cunning, and generally takes things too seriously.

Mabel: energetic, enthusiastic, and more than a little goofy, she’s a foil for Dipper’s over-serious approach to life. She also has fascinations with glitter and sweaters.

Great Uncle “Grunkle” Stan: (christened “Grunkle Stan” by none other than Mabel) a cynical, conniving old man who takes every opportunity to take advantage of gullible customers…and takes good care of his great-niece and great-nephew.

Jesus “Soos” Ramirez: the level-headed handyman who sometimes displays a lack of common sense atop of a persistent mechanical expertise. Soos is the chill emotional anchor of the Mystery Shack, keeping everything running and stepping up in the face of the gravest of perils.

Wendy: rounding out the employ of the Mystery Shack, Wendy theoretically acts as a cashier and general help. But she’s a troublemaking teenager, so she really just does what she can to get out of work and be cool.

As you spend more time with these characters, you learn more about them–their quirks, their personalities, their likes and dislikes. You can start rooting for them, as they face perils and puzzles aplenty. At the end of the day, that’s what Gravity Falls revolves around: the inhabitants of the town and the relationships they have between them. And, most centrally, it’s about the bond that Dipper and Mabel share as they start to grow older over the course of the summer.

The Secrets of Gravity Falls

Gravity Falls is a show filled with mysteries galore, many of which pay off pretty well by the end, although the second season of the show sometimes seems a little crammed with revelations. There’s also mysteries hidden within the show as well. The creator, Alex Hirsch, grew up fascinated by secret codes and ciphers, and wanted to make a show that would appeal to other people who shared that fascination. Not only are there secret ciphers at the end of every episode, but there’s ciphers written in parts of several episodes, audio that hides secret messages when played backwards, and mysterious symbols dotted all over the place.

N.B.: said mysterious symbology might put some folks off of the show. The mix of conspiracy symbology and esoteric elements can feel like it goes into shady territory. There’s Powers That Be which various characters take advantage of, and they’re not always good powers. That said, although our heroes aren’t always in the clear, their truest victories come from purer places, like the bonds between family and the power of the imagination.

The Gravity Falls fanbase was particularly known for obsessively pursuing theories, decoding clues, and unraveling secrets that were slowly being hinted at during the show. If you’re the sort of person who likes to pick through details and uncover puzzles, Gravity Falls will appeal to you in a massive way. It sets up some of its biggest plot points well in advance, stitching them together as the series goes on. While (since it’s a TV show) not everything gets paid off perfectly, it still manages to be pretty satisfying.

Should You Watch Gravity Falls?

Gravity Falls is a show about strange adventures in the Pacific Northwest, in a town with mysteries and secrets galore. You’d enjoy it if you like any of the following: wry humor, a show that values family relationships, eccentric characters, strange puzzles, and/or bizarre paranormal occurrences. If you’re not sure if you’d like it, the first couple of episodes should give you a reasonable example of what the show can be like, and it just gets better from there. I’d say to give it a shot.

This entry was posted in Horror, Mystery and tagged Paranormal, television. Bookmark the permalink.

4 Responses to Gravity Falls: a Glorious Buffet of Weirdness